Talk at the Library: Swiss Correspondents in China 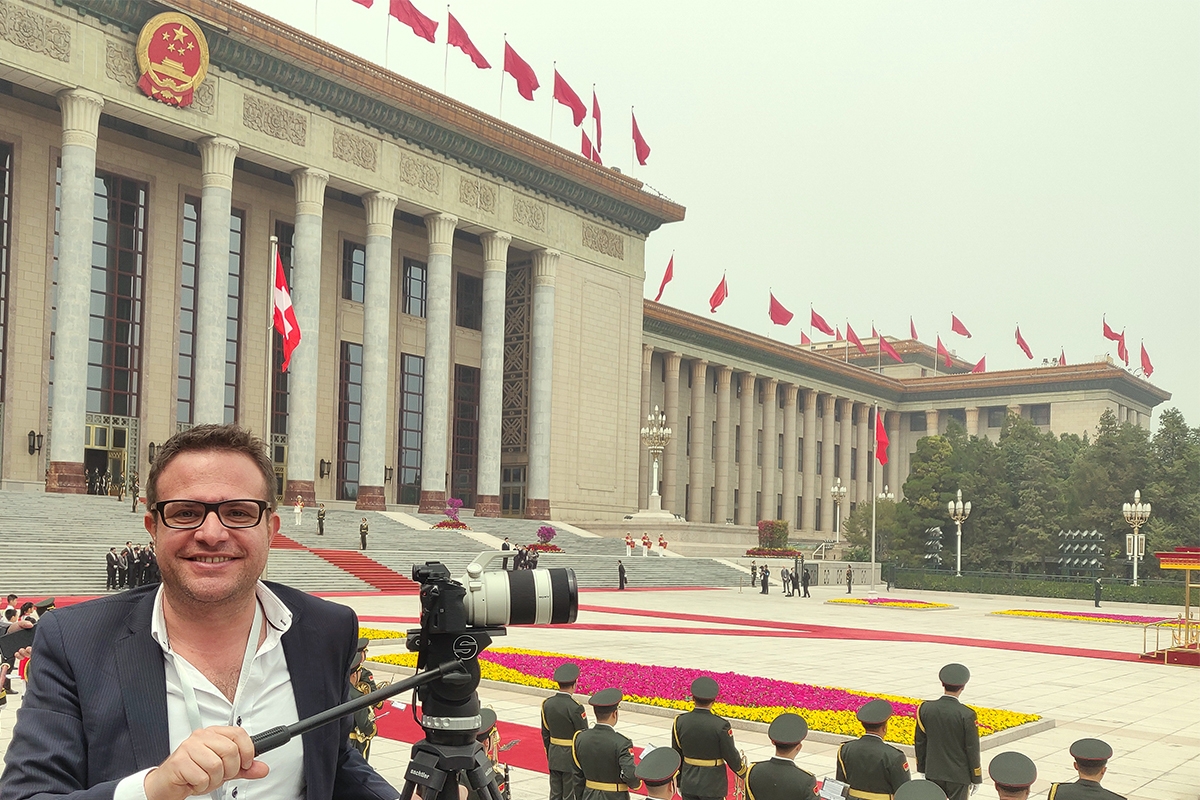 Pascal Nufer in front of the The Great Hall of the People in Beijing. Then President Ueli Maurer was received by the Chinese President Xi Jinping for a state visit  in April 2019. © Pascal Nufer

Talk at the Library

This event is for members only. Due to the current Covid-19 situation in Switzerland, this talk will be held online only. Register to participate on the conference platform Zoom.

After five years on the ground in China, SRF correspondent Pascal Nufer recently returned to Switzerland. He brings back mixed feelings, but also a fascination for a country so huge and diverse as China. We bring him together with Matthias Kamp, who has reported from China before and is going back as correspondent for NZZ, for a unique hand-off and their take on reporting from China.

What is it like to work as a correspondent in China? What is the picture of China we get in Swiss media? How has the China narrative in Switzerland changed over the last decades and years? And what are the big topics China correspondents (dis)agree on? Are reporters free to bring up their stories? And how do they deal with surveillance and censorship?

Pascal Nufer and Matthias Kamp will discuss these and more questions. Join us for this Talk at the Library online on Zoom, and put your own questions to the correspondents of two of Switzerland’s most important media outlets.

Due to the current Covid-19 situation in Switzerland, this talk will be held online only. Register here to join on the conference platform Zoom.

Pascal Nufer works for the Swiss radio and TV broadcasting company Schweizer Radio und Fernsehen (SRF). For five years, until 2019, he worked as SRF East Asia correspondent based in Shanghai. Before, he worked as a freelancer for SRF, the Swiss daily Neue Zürcher Zeitung (NZZ), and the German broadcaster Deutsche Welle (DW) based in Bangkok. During his 25-year career as journalist, he has reported for more than fifteen years from Asia, including Pakistan, Bangladesh, Southeast Asia and North Korea. Pascal is the author of the book Faszination China – Mythen, Macht und Menschen, published this July.

Matthias Kamp is head of the Asia team at the economics department of the Swiss daily Neue Zürcher Zeitung (NZZ). Before joining NZZ in January, he worked for the German business magazine WirtschaftsWoche, part of the HandelsblattGroup in Düsseldorf. Among other positions he was WirtschaftsWoche’s correspondent in Singapore (1997-2002) and Beijing (2007-2012). Matthias holds a degree in Sinology and economics from the universities of Trier in Germany and Shanghai.

Online
Thu 11 Feb 2021
12 - 1 p.m.
Zurich Time
Calculate your local time »
Register Now
20210211T120000 20210211T130000 Europe/Zurich Asia Society: Talk at the Library: Swiss Correspondents in China [MEMBERS ONLY] Join us for this talk with Pascal Nufer and Matthias Kamp, and put your own questions to the correspondents of two of Switzerland’s most important media outlets. Register to participate live at our office or online on Zoom.

This event is for members only. Due to the current Covid-19 situation in Switzerland, this talk will be held online only. Register here to join the event on the conference platform Zoom.