The Frontlines of Peace in Israel and Palestine 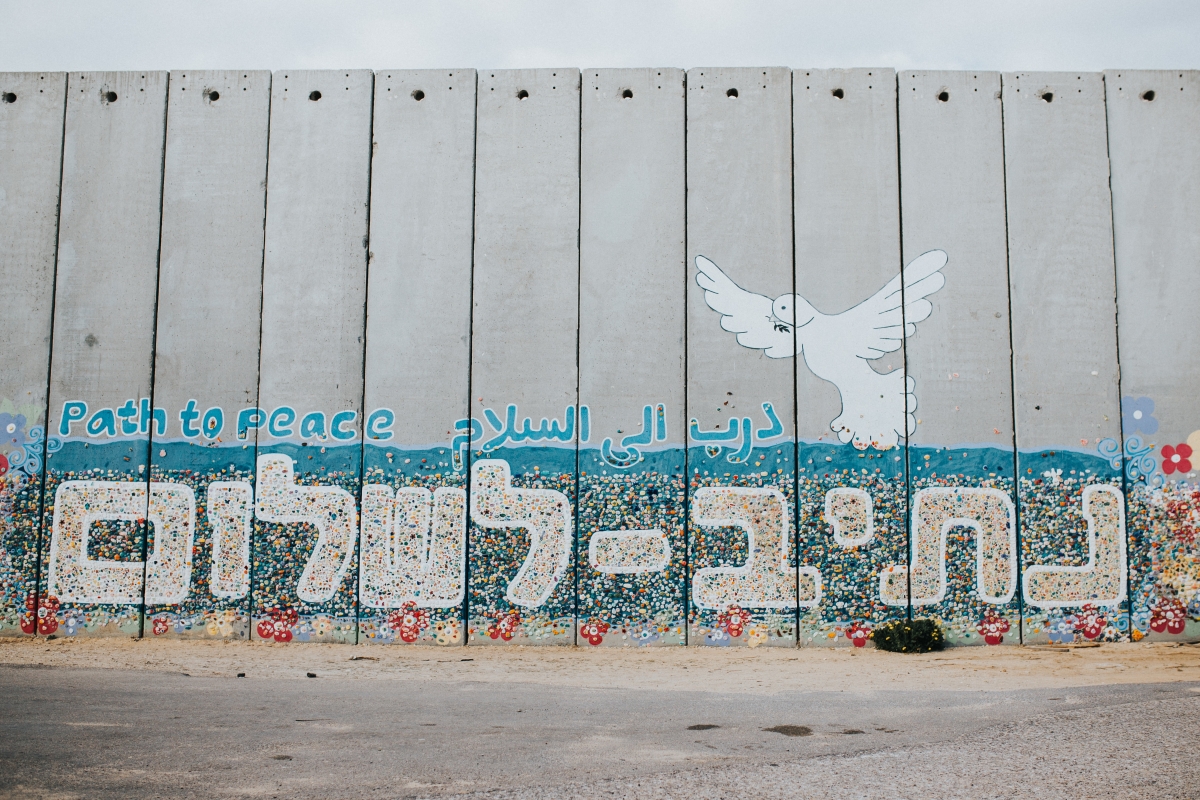 A wall at Netiv HaAsara facing the Gaza border reads the words “Path to Peace” in Hebrew, Arabic, and English. Photo by Cole Keister on Unsplash

For this event, a video is available.

Contrary to what most politicians preach, building peace doesn’t require billions in aid or massive international interventions. Real, lasting peace requires giving power to local citizens, as Prof. Séverine Autesserre showcases in her book the Frontlines of Peace. She makes the case that successful examples of peacebuilding around the world, in countries at war or at peace, have involved innovative grassroots initiatives led by local people, at times supported by foreigners, often employing methods shunned by the international elite.

What strategies have worked to build lasting peace in conflict zones, particularly for ordinary citizens on the ground? What do these imply for the ongoing conflict between Israel and Palestine? And what are some of the future scenarios for Israel and Palestine in the light of recent events?

The webcast begins with an introductory presentation by Prof. Séverine Autesserre on her book, followed by a discussion with Dr. Dahlia Scheindlin and Moien Odeh on its implications for Israel and Palestine. This webcast will be moderated and co-hosted by Dr. Dana Landau from swisspeace.

This event is co-hosted by swisspeace – a practice and research institute dedicated to advancing effective peacebuilding.

Prof. Séverine Autesserre is an award-winning author, peacebuilder, and researcher, as well as a Professor of Political Science at Barnard College, Columbia University. She is the author of The Trouble with the Congo, Peaceland, and The Frontlines of Peace, in addition to articles for publications such as Foreign Affairs, International Organization, and The New York Times. Séverine has been involved intimately in the world of international aid for more than twenty years. She has conducted research in twelve different conflict zones, from Colombia to Somalia to Israel and the Palestinian territories. She has worked for Doctors Without Borders in places like Afghanistan and Congo, and at the United Nations headquarters in the United States. Her research has helped shape the intervention strategies of several United Nations departments, foreign affairs ministries, and non-governmental organizations, as well as numerous philanthropists and activists. Séverine has also been a featured speaker at the World Summit of Nobel Peace Laureates, the U.S. House of Representatives, and the United Nations Security Council.

Dr. Dahlia Scheindlin is a public opinion expert and strategic consultant with twenty years of experience, specializing in liberal and progressive social causes. She has advised eight national campaigns in Israel and has worked in 15 other countries. Dahlia conducts research and policy analysis on the Israeli-Palestinian conflict, regional foreign policy, democracy, human rights and civil rights, minority issues, religion and state, domestic political analysis, comparative conflict and comparative politics. Her clients include a long list of local and international civil society groups, think tanks and political actors. She has regional expertise in the Balkans and Eastern Europe, particularly post-conflict societies and transitional democracies. Dahlia holds a PhD from Tel Aviv University and she has been an adjunct lecturer at Ben Gurion University of the Negev, Tel Aviv University, the Jezreel Valley College, and Eastern Mediterranean University in Cyprus. She is a co-founder at +972 Magazine and is a member of the Advisory Board of Jewish Currents magazine. Dahlia is currently a fellow at The Century Foundation and a visiting scholar (non-resident) at the Y & S Nazarian Center for Israel Studies at UCLA. She co-hosts The Tel Aviv Review podcast and in 2021 co-hosted the Election Overdose podcast at Haaretz newspaper.

Moien Odeh is an Arab Palestinian citizen of Israel – born and raised in Jerusalem. He is in his second year of PhD at George Mason University, Carter School for Peace and Conflict Resolution. He holds a LL.M degree from University of Pittsburgh and LL.B and B.A. Accounting from the Hebrew University of Jerusalem. He is specialized in conflict resolution, rule of Law, and human rights. He has extensive experience in high-level advocacy (including diplomatic missions). In Jerusalem, he was a human rights attorney and represented Palestinians in public interest cases in the Israeli legal system. He held positions as political advisor for diplomatic missions in Jerusalem and Ramallah, and is a member of Al-Shabaka, the Palestinian Policy Network. He is member of the Young Legal leaders group of the International Bar Association to deal with the Israeli Palestinian conflict. He has had apperances in Middle Eastern media and publications in Al-Jazeera, Al-Quds News-Paper, JURIST-Legal News, scientific journals and others.

Dr. Dana Landau is Senior Researcher in the Mediation team at swisspeace, and Lead Researcher on the project International Peacemaking in Pursuit of a ‘Good Peace’ (2021-2024), funded by the Swiss National Science Foundation. She also teaches Political Science at the University of Basel’s Department of Social Sciences. Her research interests center on the normative underpinnings of peacebuilding and mediation, as well as questions of diversity and inclusion in peace processes. Before joining swisspeace in 2018, Dana worked as research coordinator at the Graduate Institute of International and Development Studies (IHEID) in Geneva on peace process design and inclusion in peace and mediation processes. Previously, she worked in Pristina, Kosovo for the UN Development Programme (UNDP), focusing on women’s security and transitional justice, for the Swiss Agency for Development and Cooperation, and the European Centre for Minority Issues. She holds a DPhil (PhD) from the University of Oxford, Department of Politics and International Relations. Her research has appeared in journals such as Security Dialogue, the Journal of Intervention and Statebuilding, and Nationalities Papers.