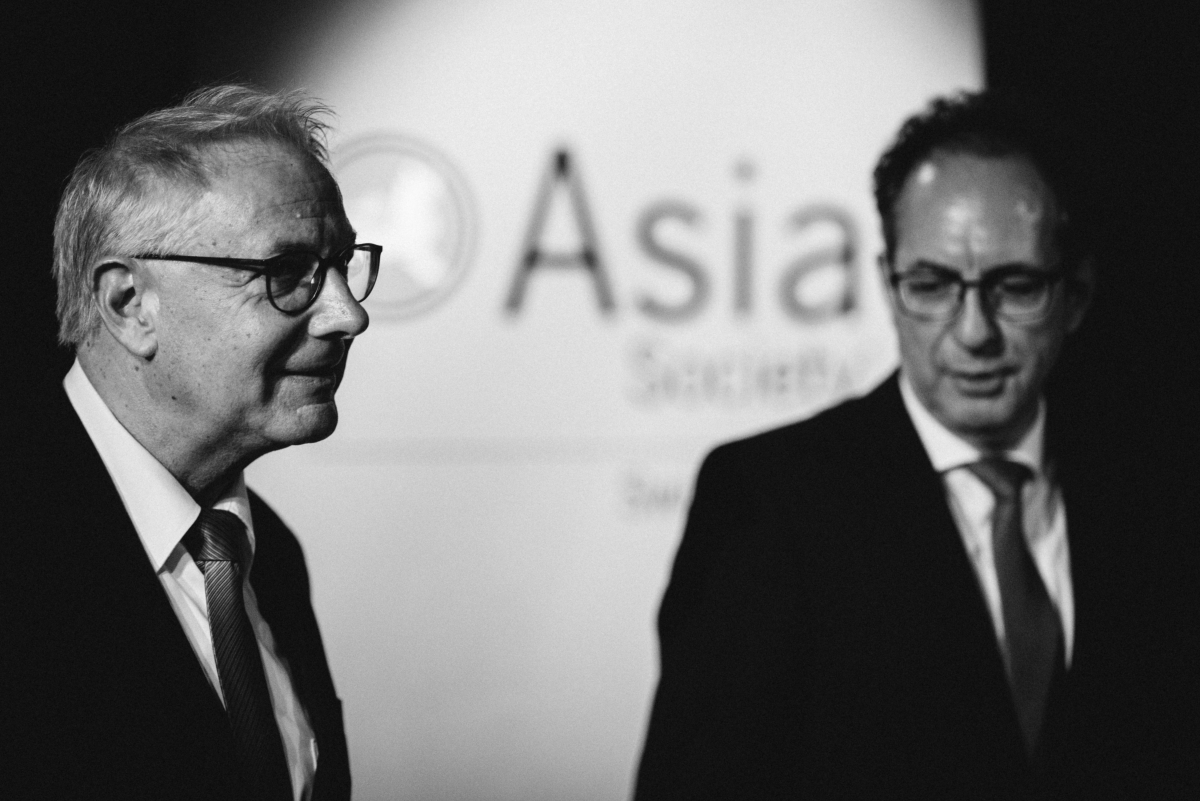 Before Ambassador Dr. Norbert Riedel was nominated the German Ambassador to Switzerland and Liechtenstein he was responsible for Asia-Pacific in the German Federal Foreign Office. From that time he and his former peer Ambassador Johannes Matyassy, Assistant State Secretary for Asia-Pacific in the Swiss Federal Department of Foreign Affairs, know each other well. Before they spoke about the Asia strategies of their respective countries to the public, Asia Society Switzerland sat down with the two ambassadors and asked: what does a day in the life of the head of an Asia-Pacific office look like? And how different do these lives look in Switzerland and Germany?

Gabriel Ruggli: Dear Ambassadors, you both worked as head of the Asia-Pacific Office in your respective foreign ministry [Riedel: German FFO, Matyassy: Swiss FDFA]. To get an impression: How big are these offices?

Norbert Riedel: In Berlin the Asia-Pacific office of the FFO alone employs around 50 people, not counting the hundreds of employees of three dozen embassies and consulates we are in charge of.

Johannes Matyassy: In Berne, we are a team of 14 employees responsible for the Asia/Pacific region. A small but very efficient team.

And how does work look like as a head of this office, could you describe a normal working day?

Matyassy: There is no normal day, we don’t even have a normal night! [laughs] One of the many qualities of our office is: We are officially open 24 hours a day, mainly due to the time difference. Think of when we have to get up to get in touch with our colleagues in Sydney or other postings in the Pacific. What we try to do is keep a daily reserve during the day, when a great deal depends on the news. A good example was last month’s developments on the Korean Peninsula, that were full of surprises and kept us quite busy.

Riedel: During my time in the Asia office I often noted that the airport became my new bus stop: I was always on the move, a non-stopping getting-on-and-off all over the globe – no phone call replaces the face-to-face contact.

How about the exchange between the Asia-Pacific offices of Switzerland and Germany? Is there a real lack of coordination between European counterparts?

Matyassy: There are several channels of exchange, such as the regular multilateral Asia–Europe Meeting (ASEM), in which Switzerland is a member since 2012. We are especially proud to have the first and only bilateral exchange between the German and Swiss Asia-Pacific offices – a success worth copying.

Riedel: In the EU we naturally have additional mechanisms for internal coordination and we often try to profit from member-countries with sector specific know-how. The same applies to Switzerland: We both first met during an international conference and realized that the Asia/Pacific Department of Switzerland and Germany can profit from each other.

You both had postings on several continents. What was special in dealing with Asia?

Matyassy: It was my specific request to take over the Asia desk coming from Argentina, because during my time at «Presence Switzerland» I had a lot of exchange with Asia and my fascination grew even fonder during the last years – especially for its cultural diversity.

Riedel: If you have lived in or worked with Asia once, it never lets you go [To Matyassy] You will experience that soon [laughs]! It’s just too a captivating region: We live in an Asian century and what happens in Asia, influences the future of Europe and what we do unavoidably.

What advice would you give future diplomats dealing with Asian countries?

Matyassy: Enjoy working with the most fascinating and dynamic region. Never get angry or impatient, always keep smiling and take your time.

Riedel: Go there! Live there! Try to understand how what is going on there will influence our lives in Europe!

Ambassador Dr. Norbert Riedel is the former official responsible for Asia-Pacific in the German Federal Foreign Office and is currently posted as the German Ambassador to Switzerland and Liechtenstein. He looks back at more than 25 years in the Foreign Office, he was posted in Bulgaria, Portugal and China.

In late June 2018 Ambassadors Riedel and Matyassy joined us for a conversation on Europe's and Switzerland's political strategies towards Asia. Read our key insights from the talk or listen to the whole conversation here: As Positive as Possible.

Gabriel Ruggli is a Project Manager at Asia Society Switzerland.