The U.S.-China Trade War and the Threat to the Global Economy | Asia Society Skip to main content

The U.S.-China Trade War and the Threat to the Global Economy 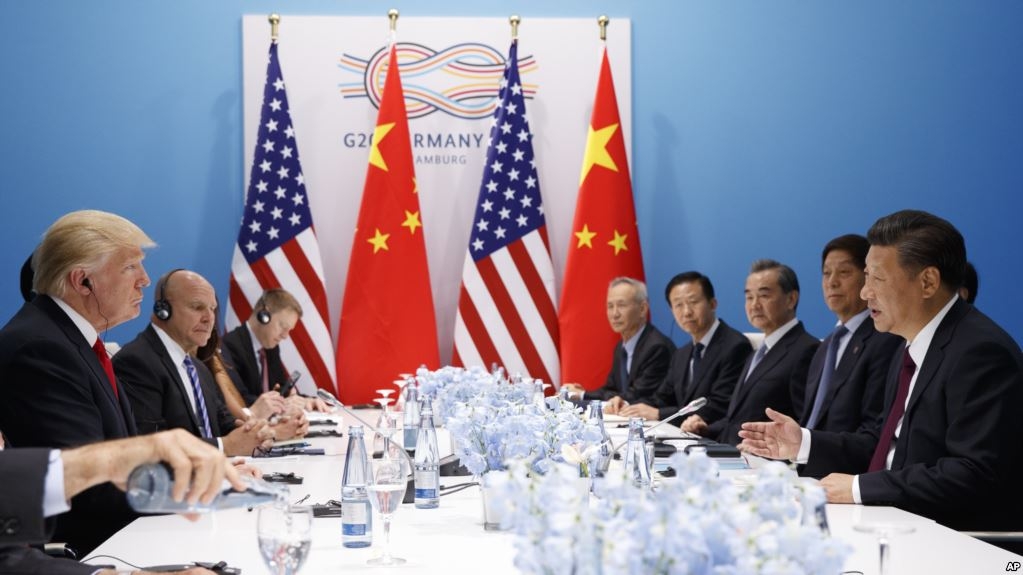 Making sense of the U.S.-China trade war is difficult in itself. Making sense of how it may provoke a wider economic "decoupling," and impact the long-term strategic relationship between Beijing and Washington, is more difficult again.

I wrote earlier this year in a report entitled "The Avoidable War" that in 2018, a major new inflection point was passed in the postwar relationship between the U.S. and China. Phase one covered the quarter century of strategic hostility from the founding of the People's Republic until rapprochement under Nixon and Kissinger.

Phase two covered the next 20 years of Sino-U.S. strategic collaboration against Moscow until the collapse of the Soviet Union in 1991. Phase three spanned 20 years of economic engagement, highlighted by China's accession to the World Trade Organization in 2001-2, China's emergence as the global factory, until the end of the global financial crisis.

Phase four has been marked by the rise of Xi Jinping's and an economically self-confident China, one emerging from the shadows and exercising a more assertive foreign and security policy across Asia and the globe. This includes a renewed strategic partnership with Russia.

But in this new fifth period of the relationship, the U.S. has formally abandoning its 40 yearlong policy of strategic engagement with Beijing and embraced an as-yet-undefined concept of strategic competition. The U.S. National Security Strategy of December 2017 followed by the February 2018 National Defense Strategy officially marked this deep transition. Since then, the U.S.-China relationship has entered a new and uncertain terrain, where many previous strategic assumptions and bilateral engagement mechanisms have been effectively abandoned.

Indeed, we now seem to be back to a 19th century-style relationship, where the principal point of political contact between the two administrations has reverted to embassies, ambassadors and the occasional special envoy. The relationship has become as brittle as it's ever been in 30 years, since the aftermath of Tiananmen in 1989.

We also find ourselves in a new world of pain in resolving an increasingly debilitating trade war. China has said it won't budge on America's insistence on retaining tariffs for a period following the deal's signing; nor will China accept the U.S. unilaterally reimposing tariffs should Washington deem China uncompliant with the deal, while denying China the right to retaliatory measures. Nor will Beijing tolerate President Donald Trump's ever-increasing "purchase order" for American goods to reduce the bilateral trade deficit.

Instead Beijing has unleashed an avalanche of nationalist rhetoric against the U.S. of a type I haven't seen in 30 years. America is now routinely described as a swaggering bully. The People's Daily reminded its readers that the People's Republic, less than 12 months after its founding, fought the U.S. to a stalemate in Korea. Xi went to Jiangxi, from where the Communist Party had set out on the Long March in 1934, before finally winning the war against the Nationalists 15 years later.

He also visited a rare-earths facility in Jiangxi, and while not being so crass as to state publicly America's dependence on Chinese rare earths supply, the point was clear -- Beijing has leverage too. The message to the domestic audience was also obvious: the world has thrown a lot at China over 5,000 years, but China has a long history of enduring pain, and China always prevails.

Meanwhile, China has calculated that a full-blown trade war would cost its economy around 1.4% in growth per year. A full fiscal, monetary and infrastructure stimulus strategy is already underway to keep growth above the critical 6% threshold. Other measures are in the pipeline.

Adding fuel to the fire, Trump on May 15 announced that the Chinese telecom giant Huawei Technologies would become a "listed entity," effectively barring American companies from supplying Huawei with essential components. China retaliated on May 31 by announcing its own "unreliable entities list" where it would list any international company taking "discriminatory actions" against Chinese companies, or actions hostile to China's national security interests. Foreign companies, it seems, are about to be caught in the crossfire.

What then are the prospects for a resolution? If the politics can still be managed, the bottom line is both sides still need a trade deal. If Trump wants to be reelected, he must sustain U.S. economic growth through 2020, prolonging an already very long growth cycle. To do that, he can not allow negotiations to collapse because market confidence would collapse with it. The real economy would risk recession in a year he can least afford it.

As for Xi, there is a limit to how much China can continue relying on economic stimulus to support growth. Chinese debt to gross domestic product is now approximately 248% (although the vast majority of this is held domestically). China's private sector also performed badly in 2018 for reasons separate from the trade war. Resolving the trade war is important for China in restoring domestic business confidence. Although China has signaled that this will not be at any political price.

The likelihood of a deal now hovers around 50-50 -- the ultimate contest between politics and economics. My prediction is that the Trump-Xi bilateral meeting, announced on June 18, to be held at the Osaka Group of 20 summit will see a "reboot" to the negotiating process. After Osaka, Trump is likely to yield on the first two of China's red lines (on retaining tariffs after a deal), while Xi will increase the promises to purchase U.S. goods from China's previous offer, although not by as much as Trump demands. That way, enough face could be saved all around. Of course, raw politics may still derail everything. And perhaps the greatest uncertainty of all is Trump's rolling calculus of what he needs to sell to his political base, and what deal he needs to wedge the Democrats who are seeking to outflank him to the right on China, by being even more hawkish.

But while there may be a solution to the immediate trade war, the technology war has barely begun. On that score, we should fasten our seat belts to face the risks of an even more fundamental decoupling of the world's two largest economies.

Decoupling has already occurred between China and the United States in the internet. This is a direct consequence of the two countries' political systems. Whether it is internet content, search engines, or the broader regulatory regime, we are already heading toward two different digital worlds -- one anchored in America, the other behind the Chinese firewall. Third countries, particularly Belt and Road Initiative countries, may find themselves increasingly caught in between.

We see the same development already unfolding in digital payments. China's Alipay, WeChat Pay and UnionPay systems have expanded not just across China, but much of the world. Meanwhile, traditional American credit cards are not universally accepted in China. China has deployed many non-tariff barriers to limit their penetration. The war is on for control of future digital payment systems -- the financial engine-room of digital commerce and the wider global digital economy.

The decoupling of the two countries' telecommunications systems is also well under way. This is justified by both countries on national security grounds. American telecoms companies have negligible access to the Chinese market, although American mobile devices have some market penetration. Meanwhile in the U.S., Huawei has become a listed entity. Other Chinese telecoms equipment providers also face the prospect of far-reaching restrictions. The battle for Huawei is underway across third-country markets. Huawei already dominates fifth-generation mobile technology in much of developing Asia, Africa and Latin America. The U.S. is seeking to prevent further encroachment by Huawei in western markets, including its closest military allies.

Once decoupling in the telecoms, broadband and digital economy sectors is complete, we can speculate on the roll-on consequences for Chinese and American global supply chains. China's new "unfriendly entities list" will force corporations to start navigating an increasingly complex minefield to avoid the growing animus between these two economic giants.

Finally, decoupling is already underway in artificial intelligence. China is acutely conscious of its strengths in this critical domain. It understands its unparalleled access to big data and the machine learning possibilities that come from that. Its leadership recognizes the vast array of military, economic and social applications that flow from harnessing this new technological frontier. Meanwhile the U.S. government is already seeking to impose restrictions on U.S. universities and research institutions in their China engagements.

The question is not where economic decoupling starts, but where it stops. If this becomes the wider reality over the next decade, what then happens to foreign and national security policy? Do we also end up creating conditions for a more comprehensive political and strategic decoupling between China and the U.S., precipitating a more generalized Cold War. Or even worse?

It starts to feel as if the dynamics of economic globalization are slowly being turned on their head. For the last 30 years, its fundamental logic, driven by global capital and technology flows, has been to transcend national politics and protectionism, thereby bringing the world closer together. With economic globalization reaching its apogee at the time of the global financial crisis, we are now beginning to see the earliest signs of its slide, generated from its own internal contradictions, but now powered by populists, protectionists, and geopolitical rivalry.

For these reasons, the U.S. and China, together with other members of the international community, should consider carefully where these unsettling trajectories can take us all. Both for their own interests, and the world's.

Read the article in the Nikkei Asian Review.