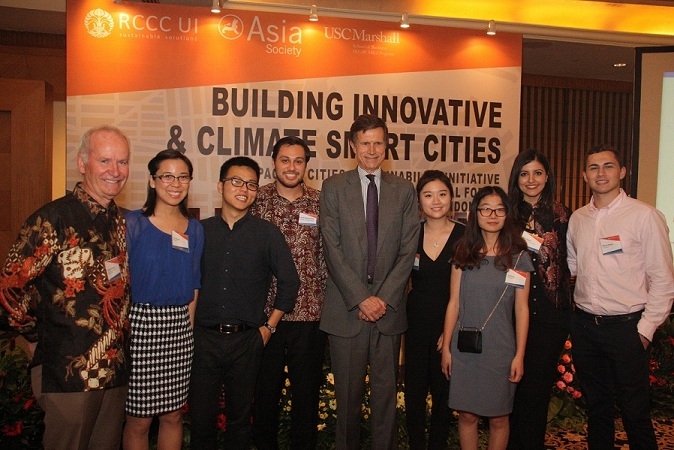 Creating a smart city is not just about sustainability, but also building a city in which people would want to live. With a predicted growth of 55,845 square kilometers in urban land coverage by 2035 alongside the huge financial barriers preventing the average citizen from acquiring this land, smart cities need a solution to this looming problem. Ing Jo Santoso noted that defining a standard for sustainability in cities is extremely difficult, but offered three criteria to evaluate a sustainable conception‘s ability to meet these challenges: strength of the local economy, health of the local sociological entity, and ability to foster cultural identity. Penny Low, eco-town builder and 14 year Member of Parliament, added that smart cities need to cater to its citizens. Low asserted that a smart city should seek to be sustainable, affordable, and bring happiness to its citizens by connecting them more deeply to the city. Low also suggested creating a stronger global community around smart cities so that mistakes can be made together and lessons can be learned for all.

While acknowledging the importance of engagement of the citizens, Komara Djaja, head of the Graduate Program in Urban studies at the University of Indonesia, emphasized the need for more government involvement. The current need for “community-based solutions” exists because “there is not much government interest,” explained Djaja. Only the government can provide certain resources, such as bus routes or vehicle drop off zones, to alleviate congestion in cities. As an example of better government involvement, Drs. Suyoto M.Si, Mayor of Bojonegoro, Indonesia, told the story of how Bojonegoro went from being a city with endemic poverty to a city with an award for the best city management in a national disaster by increasing government transparency.

The Health and Resilience of Pacific Cities

“No month is free from Dengue Fever,” stated Dr. Budi Haryanto, from the Department of Environmental Health at the University of Indonesia. Air pollution, while one of the biggest public health threats in countries like Indonesia, is not the only risk to humans in the air. With an estimated 3 billion USD in costs associated with air pollution related diseases in Jakarta 2010, more real steps must be made in controlling pollutants and protecting human health. Also promoting a holistic, active stance, Dr. Irvan Pulungan, Country Manager of ICLEI Indonesia, explained his vision of a resilient city as “one prepared to absorb and recover from any stress” while maintaining its core functions and “adapting in the face of continual change.” He urges cities to work together with their citizens to create knowledge for a better and stronger resilience strategy. Dr. Thomas Tang, Director of Sustainability at AECOM Asia Pacific, continued the trend, agreeing that a holistic, inclusive method is necessary if we are to combat the “current and emerging climate change associated health risks.”

Everyone needs help sometimes, even your local government, according to Irma Setiono, Water and Sanitation Specialist at the World Bank. In Indonesia, the “local government has many deficiencies” because “they are fragmented.” While many local governments expect water services to be provided for free because they think of water a resource that should be free, that simply isn‘t possible. While water can‘t be made free, some local governments have engaged with the local communities to manage the resources, making water more sustainable and affordable. On the topic of differing opinions on the proper costs of water services, David Spector, Principal Environmental Scientist/Planner and Senior Project Manager at CDM Smith, drew attention to the willingness to pay for cellphone service versus the willingness to pay for water in many cases. David find “fundamentally, our infrastructure is interrelated and our solution is not just within one sector but across sectors. Our solution should be holistic.”

The commonly held association of old being bad and new being good is simplistic, opened Professor Mohsen Mostafavi, Dean of the Harvard Graduate School of Design. Mostafavi showed recent efforts to reevaluate how cities deal with old building, making attempts to adapt old towns into areas that are just as resilient against flooding, climate change, and overcrowding as newer sections. However, he described some of these attempts as monotonous and grey. Even when attempting to create beautiful themes in communities, the result lacks diversity. Mostafavi advocates a method of urban planning guided by “a lack of specificity that becomes a specific style in its own design.”

Population density is a clear problem that must be dealt with in the coming years, and Scott Dunn, AECOM‘s Vice President for Strategy & Growth in Southeast Asia, spoke on some principles that should be followed in the attempts to solve this issue. When building cities, Scott said, living space should not be the only consideration. Creating a city that benefits the citizens, the government, and the private sector is key to future urban development. Aisa Tobing, City Planner and Senior Advisor to the Jakarta Research Council of the Government of Jakarta, espoused the importance of increasing the amount of non-motor and public transportation to control the rampant vehicle emissions in Jakarta. Alongside increasing public transportation, Wenhui Shan, founder of UrbanDATA, encouraged urban planners to integrate residential and office space with mass transportation systems. This would help improve those mass transit systems, city walkability, and biking safety through clustered and mixed-use land use patterns. Danang Parikesit, Professor of transportation studies at Universitas Gadjah Mada, cautioned designers that no matter how good one‘s plans are, there are always unexpected challenges, from funding loss to natural disasters. The best plans must be both highly adaptable and well led.

The Jigsaw City: Deconstructing the Newness of the Asian City

Sean Chiao, President of Asia Pacific at AECOM, opened the panel by examining an example from Singapore and from Suzhou. From Singapore, Chiao says, we can see an example of sustainable cities that fulfill the key outcomes of a “competitive economy, a sustainable environment, and a high quality of life.” From Suzhou, we are shown an example of a town integrating new towns and urban extensions, preserving unique cultural heritage sites while building world-class amenities. Dr. Budi Haryanto, Chairman of the Department of Environmental Health at the University of Indonesia, followed suit, giving examples of projects that had the resident‘s needs as the principal priority, creating an “Ecoculture” of eco-walks, eco-bike rides, eco-aerobics, etc. Felipe Correa, Associate Professor of Urban Design at Harvard Graduate School of Design, discussed the process of planning, saying “You cannot design these cities as one large thing. You have to give it a framework that allows for different elements: buildings, open space, vegetation, nature, ecological systems, to emerge over time at different speeds.”

While the concept of sustainable design is an exciting one, knowing your limits is just as important as dreaming big. Bernardus Djonoputro, President of the Indonesian Association of Urban and Regional Planners, ran through some key developments of Indonesia: the Regulatory regime, emergence of new leaders, and regulations of public-private partnerships. Jiangyan Wang, Executive Director of the China Sustainable Transportation Center, found that major cities are still not managing the growing demand for privately owned cars well enough. In order to make up for lacking management in some areas, Dicky Edwin Hindarto, Head of Indonesia Joint Crediting Mechanism Secretariat, suggested city to city cooperation, creating a better measurement system and sharing sophisticated technology. In order to create that technology, J.W. Saputro, Executive Director of Indonesian Science Fund (DIPI), discussed the focus on funding research and his interest in pursuing scientific research about city development. According to Saputro, with the complexity of each city, city science will need to become and interdisciplinary field.

Arts and Culture for a Livable City

This panel session kicked off with an opening by Rachel Cooper from the Asia Society, who said that people, art, and culture are important parts of sustainability. The first panelist was Hilmar Farid, the Director General of Culture at Ministry of Education and Culture. He emphasized that people‘s participation is crucial to the participatory-based creative and innovative city development. The second panelist was Rita Padawangi, Senior Research Fellow of the Asian Urbanisms Cluster at the Asia Research Institute, National University of Singapore. During her presentation “Livable City for Who?”, she answered the questions of “what is cultural heritage” and “what is livable city”, encouraging decentralization of urban governance, bottoms-up arts and cultural heritage, and participatory mapping of existing cultural heritage. The last panelist was Evi Mariani, a journalist from The Jakarta Post. She argued that the livability of Jakarta is determined by the communities, playgrounds, and local artist activities. Creative groups in Jakarta have made collaborative efforts with people and company, both private and state-owned. Public space is necessary for a livable city and should be made as “common place” that can be accessed by every group of people.

The panel explored how private companies and governments could work together to figure out smart solutions for urban challenges. The panel started with Kevin Hsu from Stanford University, who did a survey among the panel attendees and many of them indicated that they had trouble finding and accessing the data they need. Jong Gun Lee from the United Nations Pulse Lab introduced the Pulse Lab, where they collect data sources and make the data downloadable. He introduced the transportation project and said that they are trying to “get the data they need for analysis while protecting users’privacy” Deevya Desai, the Regional Policy & Research Manager from Grab Taxi, talked about data sharing. In order to reduce wait time, Grab partnered with The World Bank and cooperated with government and traffic management to get real-time traffic data. Andy Simarmata from Center for Urban Studies at University of Indonesia introduced i-planning, which utilizes the widely spread internet connection to help collect and analyze data in a non-traditional way. He mentioned that the challenges of getting data from government included the institutional barriers, the “lack of application that focuses on urban planning issue”, getting useful data, and data security.

INTERACTIVE DIALOGUE: Innovative Cities
The panel started with Dr. Supachai Tantikom, the Chief Resilience Officer of 100 Resilient Cities in Bangkok. He introduced the four drivers of sustainable development and resilient cities: health and wellbeing, leadership and strategy, economy and society, infrastructure and environment. He emphasized that the city in the 21st century has to be “sustainable, resilient, and smart” The next panelist was Michael W. Mehaffy, a consultant, researcher, educator and author in urban development innovations. He said that the city is about “people, public space networks, and infrastructures possess surprising value to the city” He emphasized the importance of reforming and transiting to new models that have better-connected social networks and resource networks. The last panelist was Patrick Condon, the Chair of Urban Design Program from University of British Columbia. He introduced many examples of city models and said that smart city movement would often entail biases and create new problems, as well as a lack of interconnected networks. He commented, “The kind of thinking that relies on ‘new technology’represents a crisis in our understanding of how to solve for sustainable city”