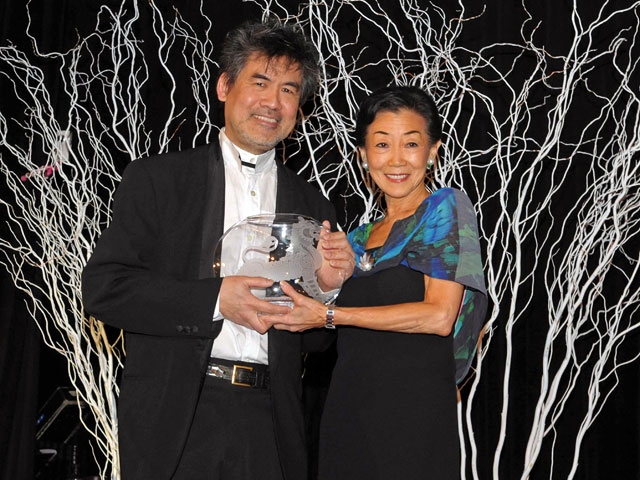 Playwright, screenwriter and librettist David Henry Hwang accepted a Cultural Achievement Award at Asia Society's 2011 Awards Dinner in New York last night with a witty, self-deprecating speech in which he thanked Asia Society for its longstanding support for his work.

After admitting he felt a "stature gap" between himself and the evening's other honorees, former U.S. Under Secretary of State John C. Whitehead and Burmese democracy advocate Aung San Suu Kyi, Hwang described his long involvement with Asia Society, dating from when the organization's then-President Robert Oxnard invited him to discuss his breakthrough play, the Tony Award-winning M. Butterfly (1988), at Asia Society.

"It was the most fun I'd ever had talking about one of my shows," Hwang told the audience in the Waldorf=Astoria's Grand Ballroom.

In addition to M. Butterfly, Hwang's best-known plays include Golden Child (1997) and Yellow Face (2007), and he has written the librettos for operas by Philip Glass, Osvaldo Gojilov and Howard Shore. His latest play, Chinglish, opened to largely favorable reaction on Broadway last fall.

The Pulitzer Prize nominee added that he had been grateful for the support shown to him by Asia Society's Hong Kong and Manila centers. "In a really significant way," Hwang said, "Asia Society understands the importance of culture."