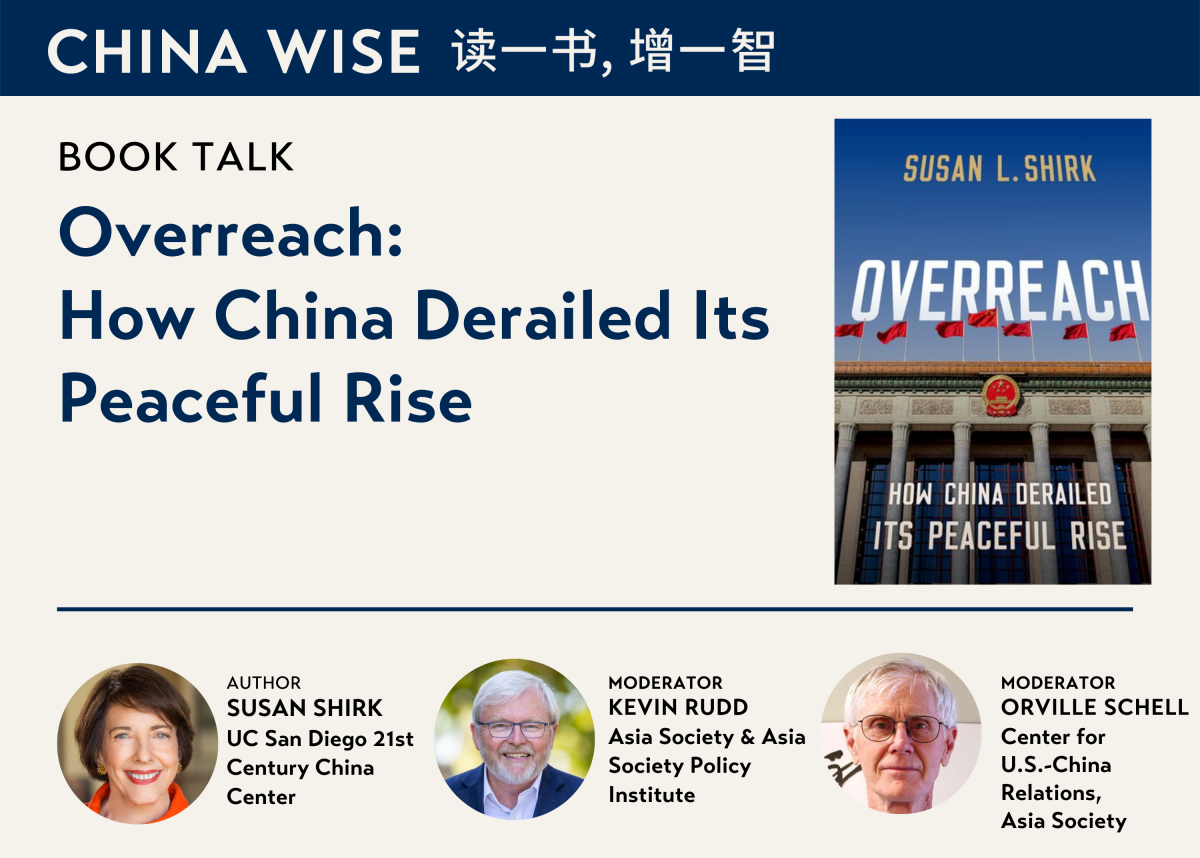 How and why did China’s relatively restrained foreign policy during its decades of sizzling economic growth turn into its more muscular approach today, and how are China’s threats against Taiwan, tightening of control on Hong Kong, challenges to the United States’ role as an Indo-Pacific power, and strident Wolf Warrior diplomacy playing around the world, and affecting China’s global aspirations? Join a discussion on these questions and more with Susan Shirk, author of Overreach: How China Derailed Its Peaceful Rise. Shirk, a former U.S. Deputy Assistant Secretary of State, and founding chair of the 21st Century China Center at the University of California, San Diego, will be in conversation with Asia Society President and CEO Kevin Rudd and Orville Schell, the Arthur Ross Director of Asia Society’s Center on U.S.-China Relations, who is co-chair with Ms. Shirk of the Task Force on U.S. China Policy.

The discussion will be followed by a cocktail reception.

This event is part of the Asia Society Center on U.S.-China Relations and Asia Society Policy Institute’s Center for China Analysis "China Wise" book series. Previous events in the series can be found here.

Susan L. Shirk is a Research Professor and Chair of the 21st Century China Center at the School of Global Policy and Strategy, UC San Diego. From 1997-2000, she served as Deputy Assistant Secretary of State in the Bureau of East Asia and Pacific Affairs, with responsibility for China, Taiwan, Hong Kong and Mongolia. Shirk’s book China: Fragile Superpower helped frame the policy debate on China in the U.S. and other countries. Her other publications include The Political Logic of Economic Reform in China; How China Opened its Door; Competitive Comrades: Career Incentives and Student Strategies in China; and her edited book, Changing Media, Changing China. Her articles have appeared in leading academic publications in the fields of political science, international relations and China studies.

Orville Schell is the Arthur Ross Director of the Center on U.S.-China Relations at Asia Society. He is a former professor and Dean at the University of California, Berkeley, Graduate School of Journalism. Schell is the author of fifteen books, ten of them about China, and a contributor to numerous edited volumes, including The New Yorker, The Atlantic, The New York Times, The Nation, and The New York Review of Books. His most recent book My Old Home: A Novel of Exile, was published in 2021. Schell worked for the Ford Foundation in Indonesia, covered the war in Indochina as a journalist, and has traveled widely in China since the mid-70s.