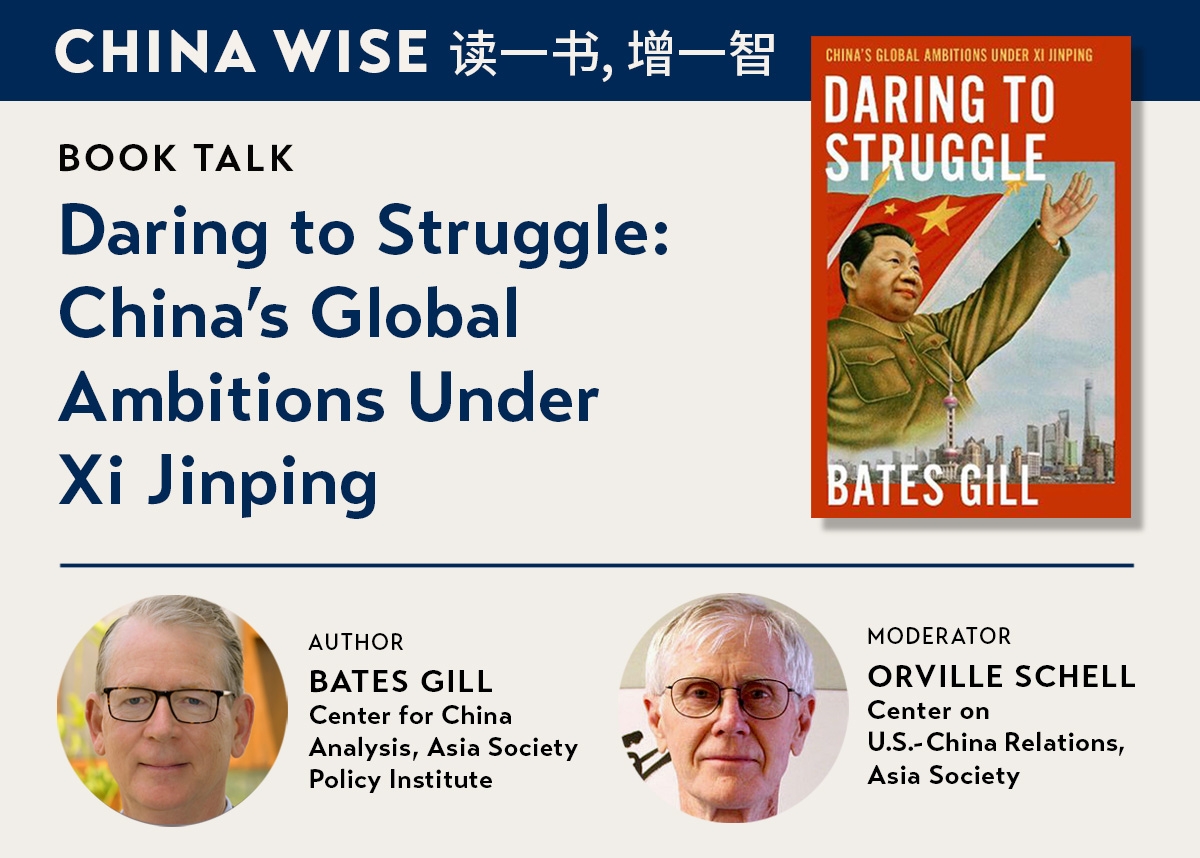 Join Asia Society’s Center on U.S.-China Relations and Asia Society Policy Institute’s Center for China Analysis to kick off the China Wise book series as we hear from Dr. Bates Gill, Executive Director of the Asia Society Policy Institute's Center for China Analysis, about his new book, Daring to Struggle: China's Global Ambitions under Xi Jinping. This timely and illuminating book explains the fundamental motivations driving China's more dynamic, assertive and risk-taking approach to the world under Xi Jinping. In Daring to Struggle, Gill focuses on six increasingly important interests for today's China — legitimacy, sovereignty, wealth, power, leadership, and ideas — and details how the determined pursuit of these goals at home and abroad profoundly shapes its foreign relationships. The result is a more contested strategic environment in the Indo-Pacific and beyond.

Orville Schell, Arthur Ross Director of the Center on U.S.-China Relations at the Asia Society, will lead the discussion.  Among the topics to be addressed will be the critical importance of Chinese Communist Party legitimacy to Xi's calculations, Beijing's increasing use of economic leverage and military coercion as part of its foreign policy toolkit, China's aspirations for leadership on the world stage, the promotion of the country's ideas and image around the globe, and what to expect in China's foreign policy following the pivotal 20th Chinese Communist Party Congress in October.

More information about the book can be found here.  Books will be available for sale and signing by the author at the event.

Dr. Bates Gill is Executive Director of Asia Society Policy Institute’s Center for China Analysis where he leads a team of research fellows, associated researchers, and administrative staff to deliver on the Center’s aim to be a global leader for policy-relevant, objective analysis of China’s politics, economy, and society and its impact on Asia and the world. Prior to joining the Asia Society, Bates held a number of research and academic leadership positions in the Indo-Pacific, Europe and United States.  Most recently, he was professor and chair of the Department of Security Studies and Criminology at Macquarie University in Sydney and was also the inaugural Scholar-in-Residence with the Asia Society Australia.  In other previous roles, he served as director of the Stockholm International Peace Research Institute (SIPRI), as the Freeman Chair in China Studies at the Center for Strategic and International Studies, and as founding director of the Center for Northeast Asian Policy Studies at the Brookings Institution. Among his other professional affiliations, Bates is a Senior Associate Fellow with the Royal United Services Institute (RUSI) in London and serves on the Board of Governors of the Rajaratnam School of International Studies in Singapore and on the Board of Advisors of the National Bureau of Asian Research. The author or editor of nine books on China- and Asia-related topics, his most recent book, Daring to Struggle: China’s Global Ambitions under Xi Jinping was published in 2022 by Oxford University Press. He has more than 200 other publications and conducted research-related travel to more than 50 countries. Bates has consulted for corporations, government agencies, and philanthropic organizations, lectured widely and provided U.S. Congressional and other parliamentary testimony related to Asian and global affairs, and made more than 600 appearances in print, broadcast and digital media. He received his Ph.D. in foreign affairs from the University of Virginia, lived and worked in China for two years, and has made more than 60 working visits to the country.  Bates received the Royal Order of the Commander of the Polar Star, the highest award bestowed up foreigners by the Swedish monarch, for his contributions to Swedish interests.

Orville Schell is the Arthur Ross Director of the Center on U.S.-China Relations at Asia Society in New York. He is a former professor and Dean at the University of California, Berkeley Graduate School of Journalism.Schell is the author of fifteen books, ten of them about China, and a contributor to numerous edited volumes. His most recent book My Old Home: A Novel of Exile, was published in 2021. Other books include: Wealth and Power, China’s Long March to the 21st Century with John Delury; Virtual Tibet; The China Reader: The Reform Years; and Mandate of Heaven: The Legacy of Tiananmen Square and the Next Generation of China’s Leaders. He has written widely for many magazine and newspapers, including The New Yorker, The Atlantic, The New York Times, The Nation, and The New York Review of Books. Schell was born in New York City, graduated Magna Cum Laude from Harvard University in Far Eastern History, was an exchange student at National Taiwan University in the 1960s, and earned a Ph.D. (Abd) at University of California, Berkeley in Chinese History. He worked for the Ford Foundation in Indonesia, covered the war in Indochina as a journalist, and has traveled widely in China since the mid-70s. He is a Fellow at the Weatherhead East Asian Institute at Columbia University, a Senior Fellow at the Annenberg School of Communications at USC and a member of the Council on Foreign Relations. Schell is also the recipient of many prizes and fellowships, including a Guggenheim Fellowship, the Overseas Press Club Award, and the Harvard-Stanford Shorenstein Prize in Asian Journalism.