Light after Darkness: Memory, Resilience and Renewal in Cambodia [SOLD OUT] 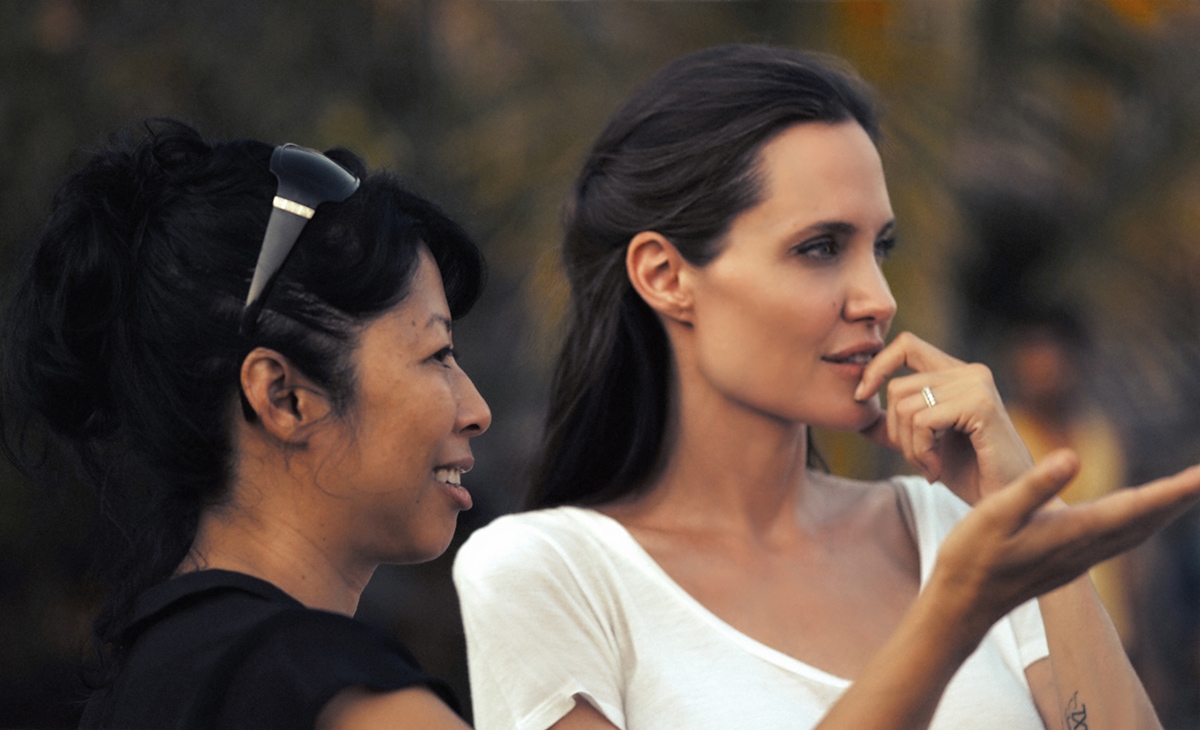 In conjunction with Asia Society's exhibition After Darkness: Southeast Asian Art in the Wake of History, and the CLA presentation of Bangsokol: A Requiem for Cambodia at BAM.

From periods of trauma and struggle follow remarkable tales of courage and renewal in the face of adversity. Such is the story of Cambodia, which endured one of the worst genocides in history only to reemerge once again as a culturally rich and vibrant nation. To talk about this collective journey of resilience — remembrance and creative paths forward — Asia Society and Cambodian Living Arts (CLA) welcome Oscar-winning actress, filmmaker and producer Angelina Jolie; acclaimed Cambodian film-director Rithy Panh (Oscar nominee for his film, The Missing Picture); Executive Director of Cambodian Living Arts Phloeun Prim; and author of the memoir and screenplay First They Killed My Father, Loung Ung. The conversation will be moderated by President of the Ford Foundation, Darren Walker. Their bold work shows us how artists are sensitive commentators of their historical moment, as well as an integral part of the often long process of reconciliation and recovery from historical trauma.

This panel coincides with both the U.S. premiere of musical and cinematic ritual performance of Bangsokol, a Requiem for Cambodia directed by Rithy Panh and composed by Him Sophy (premiering at BAM on Dec. 15-16) and the current Asia Society Museum exhibition, After Darkness: Southeast Asian Art in the Wake of History, which looks critically at the voices of artists working through radical socio-political change within their societies. The exhibition is currently on view at Asia Society Museum through January 21, 2018.

“Some have said that poetry after atrocity is not possible anymore, yet we must continue to create. We can’t start mourning without knowing how, and part of knowing how is to accept something very painful, something unexplainable … .it is more than an act of remembrance, it’s an act of transmission and brings humanization.” – Rithy Panh

Angelina Jolie
In 2011, Academy Award® and three-time Golden Globe Award winner Angelina Jolie (Director, Producer, Screenwriter) made her feature-film directorial debut with In the Land of Blood and Honey, and in 2014 directed and produced the Oscar®-nominated Unbroken. She also directed, produced and wrote By the Sea, and is executive producer on the forthcoming animated feature film set in Afghanistan, The Breadwinner. Jolie’s numerous film credits include Walt Disney Pictures’ Maleficent, Clint Eastwood’s Changeling, Michael Winterbottom’s A Mighty Heart, the action-adventure Lara Croft: Tomb Raider and Martin Campbell’s Beyond Borders, in which she played a United Nations relief worker.

She is Special Envoy to UN High Commissioner for Refugees, co-founder of the Preventing Sexual Violence Initiative, and an Honorary Dame Commander of the Order of St Michael and St George. She is also a Visiting Professor in Practice at the Centre for Women, Peace and Security at the London School of Economics and Political Science.

Rithy Panh
Rithy Panh was born in Phnom Penh but expelled from the capital by the Khmer Rouge as an 11-year-old child in 1975. He escaped to Thailand in 1979 and lived for a time in a refugee camp in Mairut. He later made his way to Paris, France, and graduated from the Institut des hautes études cinématographiques. He returned to Cambodia in 1990 and now splits his time between Paris and Phnom Penh. An internationally-acclaimed documentary director and screenwriter, he was named Asian Filmmaker of the Year by the Busan International Film Festival in 2013. He is the first Cambodian filmmaker ever to be nominated for an Oscar, for The Missing Picture in 2013. In the same year, he received a prize in the “Un Certain Regard” category at the Cannes Festival. His documentary S-21: The Khmer Rouge Killing Machine was awarded the prestigious Albert Londres Prize in 2004. Most recently, he worked as producer for Angelina Jolie’s film First They Killed My Father, based on Luong UNG’s memoir, released in September 2017. Panh is also the founder of the Bophana Audiovisual Resource Center in Phnom Penh, which makes film, photography and sound archives on Cambodia publicly available, and trains a new generation of Cambodian filmmakers and multimedia technicians.

Phloeun Prim
Phloeun Prim is the Executive Director of Cambodian Living Arts (CLA). A visionary cultural entrepreneur, Phloeun has spearheaded CLA’s transformation from a grassroots project reviving traditional arts to an organization working as a catalyst in the country’s rapidly expanding arts sector, giving artists resources and opportunities to start telling the stories of contemporary Cambodia. Phloeun has led the organization to extend its reach from local to international programming and to evolve its role from straightforward transmission of traditions to stimulating expression and innovation. The major Season of Cambodia festival in New York April-May 2013, a $2.6 million project, involving 125 artists, 34 presenting partners including the Metropolitan Museum of Art and the Guggenheim, demonstrates the capacity that Phloeun has brought to CLA.

Phloeun is regularly invited to present and participate in global dialogues relating to arts and development, including international forums such as the Aspen Institute, Salzburg Global Seminar, and the Rockefeller Foundation. He was also selected as a 2013 Asia Society Asia 21 Young Leader. In 2016, Cambodian Living Arts attracted cultural leaders from all over the world to Phnom Penh, for a major international forum on Living Arts in Post-Conflict Contexts.

As someone born during the genocide, Phloeun is proud to have returned to Cambodia and be part of the movement to use the arts for healing, social transformation, and economic development.

Loung Ung
Loung Ung (Author, Screenwriter, Executive Producer) was 5 years old when the Khmer Rouge soldiers stormed into her native city of Phnom Penh. Four years later, an estimated 1.7 million Cambodians had died. Among the victims were both Loung’s parents, two sisters, and 20 other relatives. In 1980, Loung, her older brother Meng, and his wife Eang escaped to the United States as refugees and resettled in Vermont.

In 1995, Loung returned to Cambodia to reunite with her family, and since then has made over 30 trips back to the country. As an activist and writer, Loung has devoted herself to empowering survivors and reconciliation in her homeland and internationally. She began her career in 1993 as an advocate at an abused women’s shelter in Maine where she worked to end violence against women. In 1997, she moved to Washington, D.C. to serve as the Spokesperson for the Campaign for a Landmine Free World, a position she held until 2005. Loung expanded her activism in 2013, this time as one of the writers of Girl Rising, a groundbreaking film that tells the stories of nine extraordinary girls in nine developing countries and their fights for their rights to be educated.

Loung’s memoir, First They Killed My Father: A Daughter of Cambodia Remembers, published in 2000 by HarperCollins Publishers, is a national bestseller and recipient of the 2001Asian/Pacific American Librarians’ Association award for “Excellence in Adult Non-Fiction Literature.” First They Killed My Father has been published in 14 countries and translated into Spanish, French, German, Italian, Japanese, Khmer and other languages. She is also the author of Lucky Child and Lulu in the Sky, and her books have been selected for numerous community and freshmen read programs, and are frequently taught in high schools and universities in the U.S. and overseas.

Darren Walker (moderator)
Darren Walker is President of the Ford Foundation, the nation’s third-largest philanthropy, and for two decades has been a leader in the nonprofit and philanthropic sectors. He led the philanthropy committee that helped bring a resolution to the city of Detroit’s historic bankruptcy and chairs the U.S. Impact Investing Alliance.

Prior to joining Ford, he was Vice President at the Rockefeller Foundation where he managed the rebuild New Orleans initiative after Hurricane Katrina. In the 1990s, as COO of Harlem’s largest community development organization, the Abyssinian Development Corporation, Darren oversaw a comprehensive revitalization program resulting in over 1,000 new units of housing, Harlem’s first commercial development in twenty years and New York’s first public school built and managed by a community organization. He had a decade-long career in international law and finance at Cleary Gottlieb Steen & Hamilton and UBS. He serves as a trustee of Carnegie Hall, New York City Ballet, the High Line, the Arcus Foundation and PepsiCo.

Educated exclusively in public schools, Darren received the “Distinguished Alumnus Award,” the highest honor given by his alma mater, the University of Texas at Austin. In 2016, TIME magazine named him to its annual list of the “100 Most Influential People in the World.” He is a member of the Council on Foreign Relations, the American Academy of Arts and Sciences and the recipient of thirteen honorary degrees.