Iran's Ambassador to the United Nations discusses the future of U.S.-Iran relations 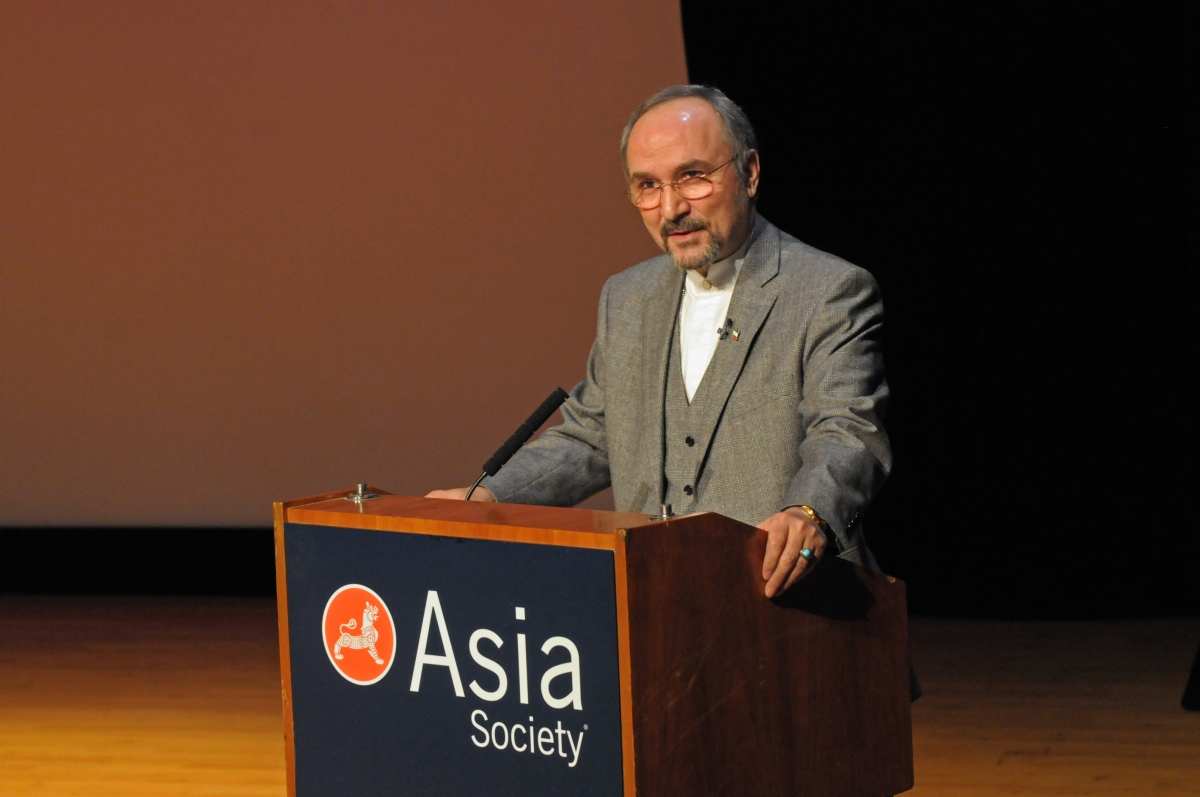 The following is a transcript of the complete prepared remarks delivered by Ambassador Mohammad Khazaee, Permanent Representative of the Islamic Republic of Iran to the United Nations, in his appearance at Asia Society New York on February 20, 2013. Watch the complete video of the program here.

As Prepared for Delivery –

Allow me to begin by thanking the management of Asia Society, especially Ms. Suzanne DiMaggio, Vice President, Global Policy Programs, for inviting me to this meeting.

The Islamic Republic of Iran, as heir to a 7000-year-old civilization and a rich culture deep rooted in annals of history as well as a record of close to three centuries of no aggression against any country, is well-versed in dealing and interacting with other nations. Article 152 of the Iranian Constitution, upon which the foreign policy of the Islamic Republic of Iran is based, stipulates the establishment of peaceful relationship with all nations, based on "mutual respect" and "legal parity". Thus, diplomatic negotiations and dialogue with the United States  does not constitute a red line for my country. although it is only a part of the complicated and multilayer relationship between Iran and the US

However, the question is as to why the establishment of relationship between our two countries on a just and equal footing has so far been elusive. And, while the both sides declare their readiness to negotiate, how does each of them define negotiations and their implications? I am not intent, today, of dissecting the history of Iran-US relations and enunciate the strains in the past decades.  Instead, I prefer to be proactive and forward looking. Nonetheless, to briefly elucidate the conditions that I referred to, I feel I need to very briefly review the major developments that have affected the relationship between our two countries, hoping that it helps us better grasp the reason for the current mistrust and, therefore, better prepare to break the impasse:

First, in principle, diplomatic ties between nations should not be cut off under almost any circumstances. Despite grievances and bitter experiences, mostly emanated from the gross intervention in Iran's domestic affairs, which, inter alia, led to the Coup in 1953 against the Iranian democratically-elected government and unwavering support for the 25-year dictatorship that followed it, the Islamic Republic of Iran did not initiate  severing ties with the US. The diplomatic rupture occurred in April 1980 on the initiative taken by the then US administration. Despite so-called US Operation Eagle Claw in the same month, which constituted a blatant act of aggression against Iran, Tehran agreed, as a sign of goodwill, to take part in the negotiations that led to the signing of the Algiers Accords. Whereas, the US Government,  which had committed itself, according to the same Accords,  to respecting Iran's rights and to abstaining from intervening and interfering in Iran's domestic affairs, not only failed to honour its commitment but also it increased its intervention and, at times, its  hostility .

Second, In the course of the two decades following the Algiers Accords, more bitter moves were made by successive US administrations against the Iranian people. They included lending support to Saddam Hussein in his war against Iran, attacking two Iranian offshore oil platforms in the Persian Gulf in 1987, shooting down Iranian passenger jet airliner, killing 290 people, in 1988, trying to disrupt Iran’s ties with its neighbors, allocating budget to destabilize the Iranian Government, and the list goes on and on.

The confidence building measures that Iran adopted during the Iraqi invasion of Kuwait, the Afghan War in 2001 and the US attack on Iraq in 2003 as well as the three rounds of talks between Iran and the US on the US force status in Iraq and Iran’s readiness for the fourth round, all, regrettably, met with disappointing answers by the US, which included branding Iran as part of the so-called ‘axis of evil’, following Iran’s constructive approach on the Afghan front.

Third, gaps between the US declared positions and the actions against the Iranian nation have been widening in the past few years. Senator Barack Obama in an interview with the New York Times in 2007 envisioned forging a new relationship with Iran and stated that, if elected president, he would “engage in aggressive personal diplomacy” with Iran, by conducting talks at the highest level, offering economic inducements and a promise not to seek “regime change.” Nonetheless, the President-elect, in the first step, left unanswered the congratulatory message sent by the Iranian President.

In his Nowruz message, in March 20, 2009, President Obama stated that: “My administration is now committed to diplomacy that addresses the full range of issues before us…” He stressed that, “instead of threats”, he would seek “engagement that is honest and grounded in mutual respect.” The same themes also appeared in the letters President Obama sent to Iran’s Supreme Leader. They represented a new approach that the Iranians welcomed and the letters were replied to.

As the Supreme Leader stated in his speech in March 2009 in the city of Mashhad, I also could assert that, had the Islamic Republic of Iran observed the slightest sign indicating a practical change in the US Government behavior, it would have certainly reciprocated in kind. Here, allow me to refer to a few actions by the US government that went counter to its ostensibly friendly gestures:

Beginning from November 2009, the US Government took a number of aggressive measures against Iran, which include signing into law at least 4 major Acts and issuing 9 executive orders that you are all aware of and I don't need to detail them. It is just worth mentioning that, in comparison, the whole number of executive orders had been issued against Iran by the previous US presidents in the preceding 25 years had not gone beyond 18.

The above are only part of the destructive measures against Iran. I don’t want to take more time by detailing such confrontational measures as cyber warfare against Iran’s nuclear sites, the terrorist attacks against Iranian nuclear scientists by the Israelis and removing the a known terrorist group responsible for the killing of more than 16000 ordinary Iranians, from the terrorist list. The moves that I referred to consist definitely of economic war against the Iranian people if not tantamount to declaring war against a sovereign state. In sum, when the US proposes negotiations in Munich and few days later gives effect to new and harsher sanctions against the Iranian people in Washington, how could anybody expect the Iranians not to be doubtful and not to ask for proof of the US seriousness and goodwill . Each of these actions alone could cast serious doubt on the goodwill of the US Government in establishing a just relationship with Iran in the minds of the Iranians, who consider themselves victims of the US policies.

Fourth, in principle, the logic of the two-track policy of diplomacy and pressure is incomprehensible, as it constitutes a conflict in term. Regrettably, for some in the US, pressure has become an end in itself. The dual track was not even dual, as it relied on one track, and that was pressure. They naïvely believe that pressure and diplomacy complement each other. Some even wrongly attribute Iran’s readiness to participate in the forthcoming negotiations in Kazakhstan to pressures. The wrong perception maintaining that the time is not on Iran’s side should be rectified as well. Because, the ambiguous positions of the West in parallel with more pressure can only beget more distrust, leading Iran, in turn, to lose hope in a negotiated settlement.

Regrettably, the facts on the ground and the US behaviors are indicative of their miscalculations and inaccurate information about the realities of today’s Iran; their assumption that Iran would succumb to pressure is chief among these miscalculations. The unprecedented rally to commemorate the anniversary of the Islamic Revolution two weeks ago, in which millions of people took part across the country, was an additional sign indicating the people’s lack of confidence in the US on the one hand and the futility of the economic pressure on the other.

Meanwhile, I understand that there are people, who seek to conclude that Iran opposes any negotiation and conclude that alternative options should be taken up. I must emphasize that they are totally wrong. Iran has never and does not oppose negotiation in any way. If the right conditions are created and we are reasonably confident that negotiations could come to fruition; undoubtedly, we consider them seriously. Accordingly, I believe that certain ingredients of appropriate conditions for negotiations are as follows: a real change in the current US perception of negotiations; respect for Iran’s national sovereignty; non-intervention in Iran’s domestic affairs; discarding the two-track policy of pressure and engagement; the existence of good faith and political will for mutual understanding; valuing bilateral cooperation in the region and focusing on extensive common interests of the two countries.

Also, it is a fact that there are third parties who feel that they would lose in the case of any détente between Iran and the US. Thus, they spare no effort in impeding the way towards any diplomatic interaction between Iran and US.

In view of the recent calls for negotiations between Iran and the US, as the Iranian high-ranking officials, including the Foreign Minister pointed out, we welcome these calls and consider them a step in the right direction and along the path of creating a trustful environment for dialogue-- dialogue with a country that  occupies a very important strategic location in the region  and has a mostly young population of close to 80 million, an educated and skilled workforce and  massive oil and gas reserves, thus possessing a huge potential for cooperating with the outside world.  It is safe to assert that Iran is one of the most impactful countries in the world that could help the international community in tackling such global and regional crises and critical situations as stability and security in Afghanistan, Iraq, the Persian Gulf, Syria and combating extremism, terrorism, trafficking in illicit drug, the spread of weapons of mass destruction and piracy.

Such nation, shored up by a rich civilization, is able and ready to play a constructive role in the international community. our history has taught us to cooperate rather than confront. Nonetheless, there are instances in our history where the Iranians demonstrated their combativeness and resilience in the face of outside aggressions.  Therefore, I would like to reiterate once more that negotiation is not a red line for Iran, provided that the US demonstrates in practice its commitment to dialogue on the basis of mutual respect. In that case, our counterparts should rest assured that the Iranian people understand respectful behavior and reciprocate in kind.

Allow me to conclude by reading out a passage from the latest speech by His Eminence Ayatollah Khamenei, which summarizes his perspective about the way out from the current situation. He says and I quote:

I thank you Mr. Moderator, Mr. Pickering and you ladies and gentlemen for your attention.