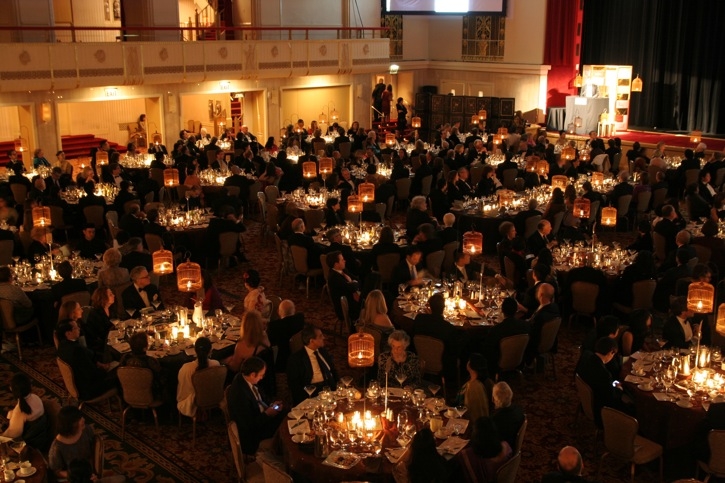 NEW YORK, November 11, 2008 - Asia Society celebrated its 28th Annual Dinner at the Waldorf=Astoria in New York City with distinguished guests from the business, arts, and policy communities. In keeping with Asia Society’s commitment to addressing vital environmental concerns, this first ever "Green" Annual Dinner honored leaders who have demonstrated vision and leadership across various sectors towards an environmentally cleaner future.

The gala honored three such "Climate Heroes." The first honoree, Alain J.P. Belda, Chairman of Alcoa, Inc., acknowledged in his remarks the global imperative posed by climate change, calling it the sustainability issue of our generation. Belda described Alcoa's many achievements in shrinking its global footprint and affirmed Alcoa’s commitment to global cooperation in this area.

Also honored was Dr. Rajendra Kumar Pachauri, Chairman of the Nobel Prize-winning United Nations Intergovernmental Panel on Climate Change. Dr. Pachauri emphasized how Asia, with over half the world’s population, will play a critical role in solving the climate crisis.

Dr. Shi Zhengrong, Chairman and CEO, Suntech Power Holdings Co., Ltd., was honored for his innovation in promoting clean energy by transforming what began as his early Ph.D research in solar photovoltaic cell technology into one of today's leading solar energy companies.

The Asia Society also presented a Cultural Achievement Award to visual artist and filmmaker Shirin Neshat, who is well-known for her visually arresting photographs and videos exploring the complex experiences of women in contemporary Islam.

The gala recognized the 2008 recipients of the Goldman Sachs Foundation Youth Prize for Excellence in International Education. Five high school students from across the US received awards for their essays and videos examining social and economic issues with global relevance.

The evening culminated in a stunning performance by Shen Wei Dance Arts, composed by the acclaimed choreographer whose work was featured in the Opening Ceremonies of the 2008 Beijing Olympics.

The Asia Society gratefully acknowledges and thanks the event's special supporters: Gala Chairman Vikram Pandit, CEO, Citigroup Inc., and Chairman Stephen A. Schwarzman, Chairman, CEO and Co-Founder of Blackstone, along with many others.

Alain Belda
Alain Belda is Director and Chairman of the Board of Alcoa, which reduced company greenhouse gas emissions by 33% from a base year of 1990. The company has made major commitments in developing new technologies that are delivering further greenhouse gas reductions. During the 2008 Beijing Olympics, Alcoa provided light-weight aluminum for buses, nearly 50% lighter than a traditional bus body. Alcoa is a founding member of the US Climate Action Partnership, urging US leadership in climate change action and domestic legislation, and a member of a number of other global initiatives, which successfully urged G8 leaders to take the lead on climate change.

Dr. R.K. Pachauri
Rajendra Pachauri is the Chair of the Nobel Peace Prize-winning Intergovernmental Panel on Climate Change (IPCC), the scientific intergovernmental body that provides decision-makers and the public with an objective source of information about climate change. Dr Pachauri is a prominent researcher on environmental subjects, recognized internationally for his efforts to build up and disseminate greater knowledge about man-made climate change and to lay the foundations for the measures that are needed to counteract such change. He was recently awarded the second-highest civilian award in India, the Padma Vibhushan, and received the Officier De La Légion D’Honneur from the Government of France in 2006.

Dr. Shi Zhengrong
Dr. Shi Zhengrong is Founder and CEO of Suntech Power Co., Ltd., a company he established in 2001 to specialize in manufacturing silicon solar cells, modules and systems. The rapid growth and success of Suntech combined with the quality of its products has given PV markets and investors a new confidence in PV manufacturing in China. Shi envisions his company growing to the size of oil conglomerates as the world increasingly shifts from fossil fuels to renewable energy, and his trailblazing efforts have also inspired six other former classmates to play a leading role in successful Chinese solar ventures of their own.

Shirin Neshat (Cultural Achievement Honoree)
Shirin Neshat is a leading contemporary artist. In her videos, films, and photographs she draws upon her Iranian heritage for inspiration and addresses the complexities of the contemporary Muslim world through visually arresting imagery. She has exhibited her works internationally at major museums, galleries, and performance halls. Her numerous awards include Lillian Gish Prize (New York); Fine Art Prize from Heitland Foundation (Germany); Infinity Award for Visual Art from International Center for Photography (New York); and First International Prize at the 48th Venice Biennale (Italy). Born in Qazvin, Iran, she has lived the United States since 1974 and received an MFA from the University of California, Berkeley.