By Jackson Ewing and Avia Nahreen 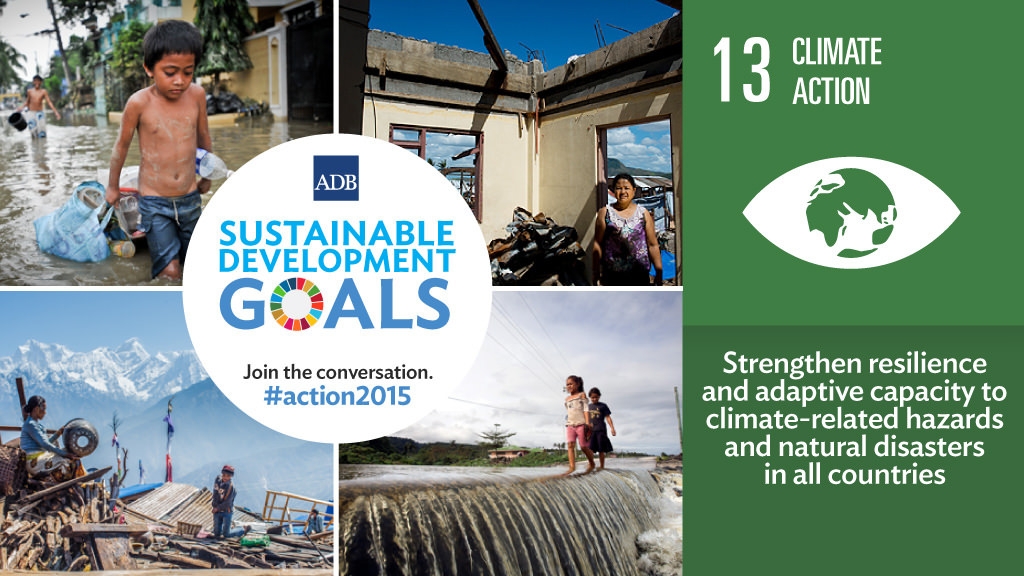 The Institute for Policy, Advocacy, and Governance (IPAG), has recently published the book Towards Sustainable Development: Lessons from MDGs & Pathway for SDGs on how the Sustainable Development Goals (SDGs) can build on the Millennium Development Goals (MDGs). The book features articles from experts, policymakers, practitioners and academicians in diverse but closely related areas of economic growth & sustainable development. The pool of writers represent global, regional, and national experts with experience and knowledge on key areas like resilient and equitable economic growth, technical and policymaking aspects of sustainable development, and environmental and geopolitical implications of attaining the 2030 Goals. The following is an article from the book by the Asia Society Policy Institute's Director for Sustainability Jackson Ewing and IPAG's Senior Research Associate Avia Nahreen.

Since this formative period, actors tasked with promoting sustainable development and facing climate change have progressed along intertwined, if separate paths. The United Nations Development Program took the sustainability mantle alongside a range of partners in public, private, and civil society sectors; culminating in the Sustainable Development Goals (SDGs) coming into force in early 2016. Meanwhile, the UNFCCC built a complex bureaucracy and diplomatic playing field in search of grand international bargains to roll-back the causes of climate change and judiciously respond to its impacts. This process has been defined by 25 years of mixed results, culminating most recently in the lauded Paris Agreement of late 2015. (United Nations, 2015).

The relationship between these two tracks, both practically and symbolically, is often ambiguous. Climate change has the capacity to undermine wide swathes of the global sustainable development agenda. Its impacts are already exacerbating poverty and food insecurity (SDGs 1, 2), eroding public health (SDG 3), making clean water less accessible (SDG 6), and pushing vital land and marine ecosystem to the brink (SDG 14, 15) (IPCC, 2014). Addressing climate change can likewise have the co-benefits of reducing localized pollution, making energy more affordable and clean (SDG 7), spurring economic growth (SDG 8), building sustainable infrastructure (SDG 9), reigning in consumption and waste (SDG 12), and leading to a more peaceful global society (SDG 16). So addressing climate change is essential for meeting the SDGs, and if key SDGs are met, it will benefit the fight against climate. What is less clear is whether and how this reality impacts climate and SDG actions on the global stage. This ambiguity is put in stark relief with SDG 13: Addressing climate change (see Table 1).

The 17 goals and 169 targets of the SDGs offer ambitions and report cards for improving the human condition by 2030. Following from the Millennium Development Goals (MDGs) before them, the SDGs came from an exhaustive multi-stakeholder consultative process and offer a synthesis of broad goals, more granular targets, and indicators to measure progress designed to be used by countries and, presumably, a more comprehensive set of stakeholders. If the international community is, in fact, united behind meeting the SDGs, then wide swathes of action can at least in principle be evaluated for whether it contributes to or undermines this objective.

SDG 13 acknowledges the need to keep global temperature in check and prescribes the broad-based goals of integrating climate change into wider development strategies, strengthening resilience and adaptation capacities, and improving education, awareness, and planning – especially in vulnerable communities. SDG 13 provides indicators to measure progress on these fronts, which consist mostly of counting countries that say they have plans and policies in place. While this may spur some countries to prioritize climate policy across sectors beyond their current actions, the efficacy of these policies will vary widely. In other cases, countries may just pay lip service to the spirit of these SDG 13 goals, in which case its value will be marginal at best.

SDG 13.A is a different story. It treads on established ground by calling for developed country commitments to the UNFCCC-created Green Climate Fund (GCF) at the level of $100 billion annually by 2020. On its surface this adds nothing new, and merely reiterates the negotiated outcomes from Paris and other UNFCCC negotiations for tackling climate change. Yet its inclusion in the SDGs could have messaging and material results.

Like the MDGs, funding shortages are a core obstacle to reaching SDG targets. A huge amount of capital is needed to address climate change. Energy systems must be overhauled, highly pollutive industries phased-out, resilience and adaptive capacities enhanced – including through broad infrastructure rejuvenations – and entrenched behaviors amended. These challenges are most pronounced in poorer countries, and SDG success is contingent in part on financial resource flows from developed to developing economies. Hence, raising funds for the GCF coffers is an essential task, and SDG 13 offers the UNDP and its partners an avenue through which to channel their efforts.

Projections are varied and contingent on these issues, but there is no disputing that large financial flows are needed. The International Energy Agency estimates that switching from fossil fuels to low-carbon sources of energy will cost around $44 trillion between now and 2050 (2017). The UNFCCC estimates that the mitigation measures needed to return global greenhouse gas emissions to current levels by 2030 will fall between $200-210 billion per annum (UNFCC, 2017). In developing countries mitigation could cost $140 to $175 billion a year over the next 20 years (with associated financing needs of $265 to $565 billion) and over the period 2010 to 2050, adaptation investments could average $30 to $100 billion a year. (World Bank , 2010).

Since its initial resource mobilization in 2014, the GCF has gathered pledges of roughly $10.3 billion. The total fund allocated by the GCF in 2016 was $1.3 billion, just over half of its $2.5 billion aspiration. Ever since its inception in 2010, the fund has been under pressure to deliver on promises to back transformational projects and give equal weight to curbing emission and financing adaptive mechanisms. The GCF could be made more effective by improving the decision-making process amongst board members, making approval of proposals go through more assessments, engaging active observers to the fund in more decision-making, and ensuring that proposals fully comply with GCF policies and guidelines.

Pledges are just that until they are fulfilled, and there is no guarantee that the GCF will meet its funding aspirations. Just this year while declaring his intention to pull the United States (US) out of the Paris Agreement, President Donald Trump lamented the so-called ‘vast fortune’ that the US was sending to the GCF, which he pledged to curtail. The United States has pledged $3 billion towards the fund and has till date contributed around $1 billion (BBC , 2017). As with many things in the current climate diplomacy landscape, there is no legal penalty for walking back from GCF contributions, and Trump’s actions demonstrate how changing political tides can undermine GCF goals.

This means that the more people working to make GCF and broader climate financing goals a reality, the better. The UNDP-led coalitions geared towards meeting the SDGs are positioned to help meet funding shortfalls, and the SDG 13A provision makes it an explicit task to help fund the GCF. These players can help mobilize public funding from countries and multilateral development banks that will in turn facilitate the flow of further private sector capital – which is a much larger pool – into the GCF and toward broader climate change challenges. SDG champions would also do well to help developing nations utilizing funds effectively and transparently, which is far from assured (Non-traditional Security Studies, 2013).

Leveraging and effectively deploying this private sector finance requires creative approaches to infrastructure profit-making and public-private partnerships. The challenge is here is to mitigate risk and creating bankable projects with climate mitigation and/or adaptation value. Private sector financial organizations and public development banks should cooperate with multilateral institutions to grow such a pipeline of bankable projects. Public multilateral funds including the GCF can also encourage private sector action through expenditures that cover, or reduce, financial risks.

There is already a basis of innovative financial architectures to work from that facilitate private capital flows through such risk reductions policies by the public sector. They include ministerial guarantees designed to reduce risks from changing currency values and shifting regulatory environments. There are central bank funds with liquid collateral that cover part of the risk of a sustainable development project. Innovative schemes of providing access to capital in places where borrowing rates are traditionally high through concessional loans that are long-term, supplemented by public dollars, and offer grace periods for repayment at low interest rates are in place. Financial planning includes national government policies that support private capital flows to sustainable development projects through investment incentives, tax breaks, and insurance provisions. They include ‘green banks’, feed-in tariffs, and carbon prices that supply front-end incentives for renewable technology adoption. And they can include the GCF as a funding instrument that brings value beyond just the direct results of the dollars it spends.

Created specifically to serve low-and-middle income countries, and focusing on the importance of private sector action, the GCF is a noble and potentially potent mechanism to ensure a better climate future for developing nations. And it is teetering on the edge of relevance. It is here that SDG 13 has its most tangible role to play in facing the global climate crisis, and leaders and advocates for meeting the SDG climate goals should focus on finance.

Ultimately, the 17 goals and 169 targets of the SDGs offer ambitions and report cards for improving the human condition by 2030. Following from the Millennium Development Goals before them, the SDGs came from an exhaustive multi-stakeholder consultative process and offer a synthesis of broad goals, more granular targets, and indicators to measure progress designed to be used by countries and, presumably, a more comprehensive set of stakeholders. If the international community is in fact united behind meeting the SDGs, then a wide range of action can at least in principle be evaluated for whether it contributes to or undermines this objective. SDG13 is no exception, and can make its greatest contribution through bringing further financial resources to the climate cause.