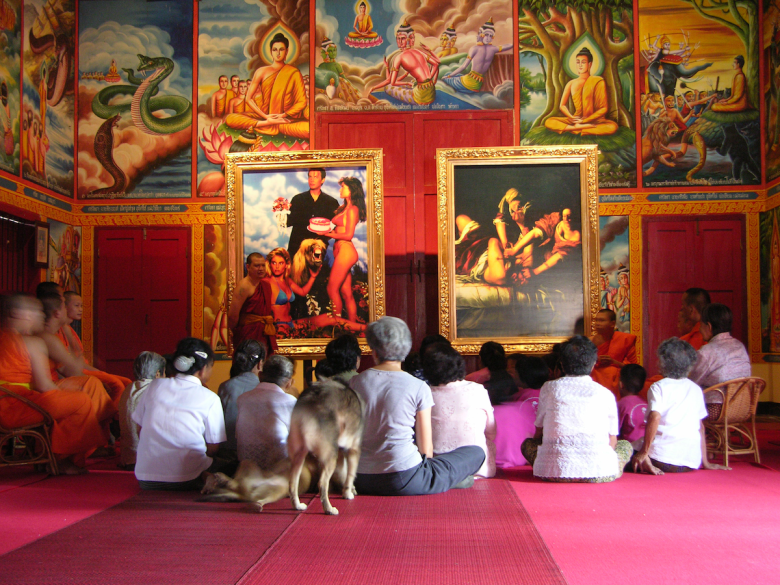 Among the leading video artists from Thailand, Araya Rasdjarmrearnsook’s practice addresses the dichotomies of life and death, the search for autonomy within cultural constraints, and notions of identity and difference examined through class hierarchies and regional idiosyncrasies.

Village and Elsewhere reveals how artworks can take on meanings and lives not even envisioned by their creators. Her documentation of a Buddhist “art history lesson,” in which reproductions of two iconic western paintings are paired to demonstrate the relevance of the Five Precepts of Dharma, illustrates how open to subjective interpretation art can be. Enough speculation can be made about what conclusions might have been drawn in the correlation established between the women as sexualized objects in Jeff Koons’s work and the Biblical female figure as a powerful protagonist known to have weaponized her sexuality to protect her city from destruction in Artemisia Gentileschi’s painting. There is humor in witnessing the discussion led by a male Buddhist teacher for an audience that includes elderly women, children, and dogs. But with Gentileschi—a 17th-century painter renowned both for her artistic triumph and her personal history of surviving injustice and brutality—represented in a video recorded through the lens of a contemporary female artist, the male gaze is also subverted.