Women as Agents of Change in an Interdependent World 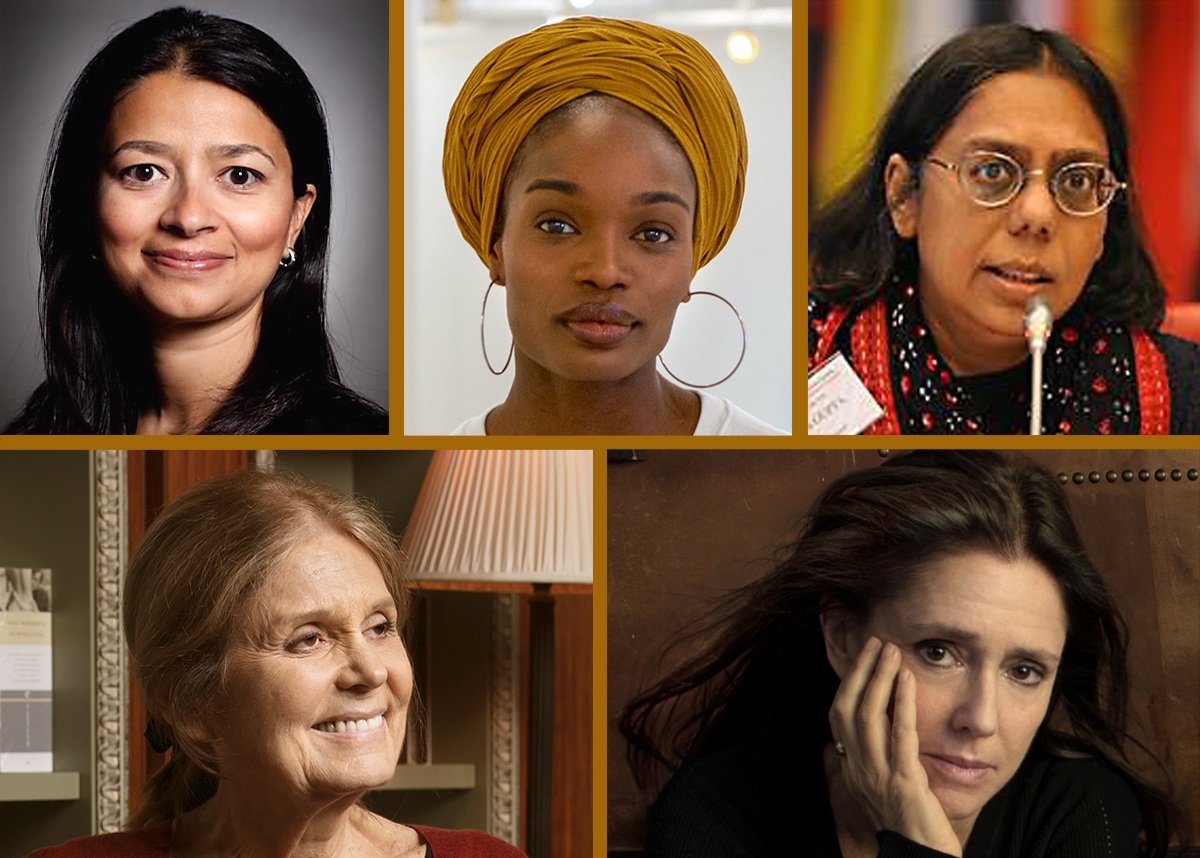 This program is part of “Agents of Change in an Interdependent World,” a series of programs, cosponsored by the Culture as Diplomacy Initiative of Asia Society and the John Brademas Center of New York University, which examines issues in “interdependency,”  to describe our globalized and interconnected world. The circumstances we are living in today requires us to connect globally, to share and grapple with the pressing, emerging, threatening challenges that transcend borders. This program is presented in collaboration with OneShared.World.

Following the 100th anniversary of the ratification of the 19th Amendment to the United States Constitution and the election of the first woman of color as Vice President in the nation’s history, this year’s program will highlight creative women who are at the vanguard of change agents in society.

The program will be introduced by Ruchira Gupta and will feature a keynote discussion with Gloria Steinem and Julie Taymor, discussing Steinem's lifelong commitment to women's rights as told through the biopic The Glorias, directed by Taymor. This will be followed by a panel discussion, moderated by Olga Garay English  with Sayu Bhojwani , Erika Dickerson-Despenza, reflecting new generation of women change agents and new approaches to this moevement. The program will end with a spoken word performance.

Our presenters will speak to the inspiring ways in which culture, arts, and creativity are giving voice to a new generation of women’s activism. They are visionaries, working as individuals and with emerging groups to create new alliances for change. A common thread uniting them all is the conviction that creative thinking offers new ways of connecting, breaking down walls, and inspiring change. Through imagination, activism, and passion, these women have brought together new vision to create a more interdependent world in which we can work together to tackle some of our most pressing challenges.

By hearing the voices of women who are actually doing this work, we hope to inspire our audience with new models of change and promote new connections among an emerging interdependent community.

Gloria Steinem is a writer, political activist, and feminist organizer. She was a founder of New York and Ms. magazines, and is the author of The Truth Will Set You Free, But First It Will Piss You Off; My Life on the Road; Moving Beyond Words; Revolution from Within; and Outrageous Acts and Everyday Rebellions, all published in the United States, and in India, As If Women Matter. She co-founded the National Women’s Political Caucus, the Ms. Foundation for Women, the Free to Be Foundation, and the Women’s Media Center in the United States. As links to other countries, she helped found Equality Now, Donor Direct Action, and Direct Impact Africa. For her writing, Steinem has received the Penney-Missouri Journalism Award, the Front Page and Clarion awards, the National Magazine Award, the Lifetime Achievement in Journalism Award from the Society of Professional Journalists, the Society of Writers Award from the United Nations, and the University of Missouri School of Journalism Award for Distinguished Service in Journalism. In 1993, her concern with child abuse led her to co-produce an Emmy Award–winning TV documentary for HBO, Multiple Personalities: The Search for Deadly Memories. She and Amy Richards co-produced a series of eight documentaries on violence against women around the world for VICELAND in 2016. In 2013, she was awarded the Presidential Medal of Freedom by President Barack Obama. In 2019, she received the Freedom Award from the National Civil Rights Museum. She is the subject of Julie Taymor’s recent biopic, The Glorias, released in Fall 2020.

Julie Taymor’s feature film of Gloria Steinem’s My Life On The Road titled The Glorias, starring Julianne Moore, Alicia Vikander, Janelle Monáe and Bette Midler premiered at the Sundance Film Festival in January 2020 and was released on Amazon Prime Video this past September. Other film credits include Fool's Fire, Oedipus Rex starring Jessye Norman which received an Emmy Award as well as the International Classical Music Award, Titus, starring Anthony Hopkins and Jessica Lange; Frida starring Salma Hayek which garnered six Academy Award nominations and won two; Across the Universe which received Golden Globe and Academy Award nominations, The Tempest, starring Helen Mirren, and a cinematic version of William Shakespeare’s A Midsummer Night’s Dream, filmed during her critically acclaimed stage production at Theatre for a New Audience and premiered at the Toronto International Film Festival.

Her Broadway adaptation of The Lion King debuted in 1997 and received 11 Tony Award nominations, with Julie receiving awards for Best Director and Costume Designer. The show has been seen by more than 100 million people worldwide in over 100 cities in 20 countries and on every continent except Antarctica and its worldwide gross exceeds that of any entertainment title in box office history.

Other theater credits include the play Grounded, starring Anne Hathaway, at the Public Theater as well as Broadway’s M Butterfly starring Clive Owen, Spider-Man: Turn Off the Dark, The Green Bird, and Juan Darien: A Carnival Mass, which earned five Tony Award nominations including one for her direction. Operas include Oedipus Rex, with Jessye Norman, The Flying Dutchman, Salome, Die Zauberflote (in repertory at the Met), The Magic Flute (which inaugurated a PBS series entitled “Great Performances at the Met”); and Elliot Goldenthal’s Grendel which premiered at the LA Opera and was also performed at the Lincoln Center Festival.

Taymor is a recipient of the 1991 MacArthur “Genius” Fellowship, as well as a 2015 inductee into the Theater Hall of Fame for Lifetime Achievement in the American Theater, the recipient of the 2015 Shakespeare Theatre Company’s William Shakespeare Award for Classical Theatre, and a 2017 Disney Legends Award honoree.

Dr. Sayu Bhojwani is a civic entrepreneur and democracy futurist committed to advancing the leadership of immigrant and refugee women. She is Founder of Women’s Democracy Lab, established in 2020 to support women of color in elected office, and of New American Leaders, which empowers movement leaders to run, win and lead. Through her organizing, writing and speaking, she advocates for systems change that will result in a more robust democracy with a place for us all.

A recognized expert in diversity and American politics, she holds a Ph.D. in Politics and Education from Columbia University and is the author of People Like Us: The New Wave of Candidates Knocking at Democracy’s Door.  Her widely viewed TED talk uplifts immigrants’ critical role in our democracy. In 2019, she was named by CQ Roll Call one of three people outside of the Beltway to watch. Born in India and raised in Belize, Sayu is a proud New Yorker who served as the city’s first Commissioner of Immigrant Affairs.

In Apne Aap, she has helped more than 20,000 girls, women and their family members exit prostitution systems. She testified to the US Senate for the passage of the first US Trafficking Victim Protection Act and has led survivors after the 16 Dec bus rape for a new Indian anti-trafficking law. She was in the steering committees for the 11th and 12 5 year plan for women and children.

She advocated for the creation of the Trafficking Fund for Survivors at the United Nations by addressing the UN General Assembly and taking survivors to speak there and to the UN Human Rights Council in Geneva. She advises the UN on issues related to women and children. She has been posted to Nepal, Thailand, Kosovo, Washington DC, Iran and New York while working with the UN and helped develop frameworks on women’s empowerment and child protection, national plans of action against trafficking, and zeo tolerance policies on sexual violence in various capacities in the UN for over a decade.

She has won an Emmy, the Clinton Global Citizen award, the UN NGO CSW Woman of Distinction of Award and the highest French civilian distinction, Chevalier de l’Ordre National du Mérite (Knight of the National Order of Merit).  As a journalist she has worked with The Telegraph, The Sunday Observer, Business India and BBC. She writes for New York Times, The Guardian, UK, CNN, BBC, Hindu. Telegraph, Hindustan Times, Prabhat Khabar, Rajasthan Patrika, Wire and Scroll.

Olga Garay-English (moderator) is an independent arts consultant. She is Senior Advisor for International Affairs to Chile’s Fundación Teatro a Mil, the producer of Festival Internacional Santiago a Mil, one of the top international festivals in Latin America. She was Senior Advisor to France Los Angeles Foundation (2014-2019), funding collaborations between LA and French artists. In 2016, the County of Los Angeles named her Executive Director of the Ford Theatres, a 1,200-seat historic amphitheatre in the Hollywood Hills, until the end of 2019 when the Los Angeles Philharmonic assumed responsibilities for the venue. She is Senior Advisor to Staging Change, funded by the Andrew W. Mellon Foundation, which is a research project of the John Brademas Center of New York University, and the Social Impact of the Arts Project at the University of Pennsylvania.

From 2007 to 2014, Olga was Executive Director, City of Los Angeles Department of Cultural Affairs, reporting to LA Mayor Antonio Villaraigosa. As founding Program Director for the Arts for the Doris Duke Charitable Foundation (1998-2005), Olga was responsible for one of the largest national arts funders in the United States, awarding $145 million to arts organizations in the US and abroad. The Western Arts Alliance named Ms. Garay-English, one of 2013’s Fifty Most Powerful and Influential People in the Nonprofit Arts and one of the top five Local Arts Agency Leaders. She was named a Chevalier dans l’Ordre des Arts et Lettres in 2012.  Born in Santa Clara, Cuba, she became a United States citizen in 1978. She is the widow of Dr. Kerry English, a developmental pediatrician who dedicated his life to serving abused and foster children in South Los Angeles.

Inspired by its founder, former Congressman and NYU President Emeritus, the John Brademas Center of New York University pursues a collection of initiatives in the areas which formed the core of John Brademas' life in public service: the state of Congress and the legislative process in democracies; the shifting dynamics in foreign policy and international affairs; and, the present state and future prospects for higher education, the humanities, arts and culture. With a growing reputation as a home for informed and civil debate on politics, public policy and other major issues facing the nation and global community—the Brademas Center undertakes programs at NYU's campuses in New York City and Washington, D.C., and increasingly around NYU’s global network. Learn more.

OneShared.World is a broad and inclusive movement of people in 115 countries on five continents working collaboratively across diverse cultures, communities, ethnicities, generations, and nations to ensure a better future for humankind and the sustainability of our common home. The organization is building a fully inclusive, global social movement and political force representing the democratic expression of our common humanity. The organization’s Declaration of Interdependence has been translated into 19 languages. Learn more.

Watch the trailer for The Glorias, a film about the life of Gloria Steinem, directed and produced by Julie Taymor.