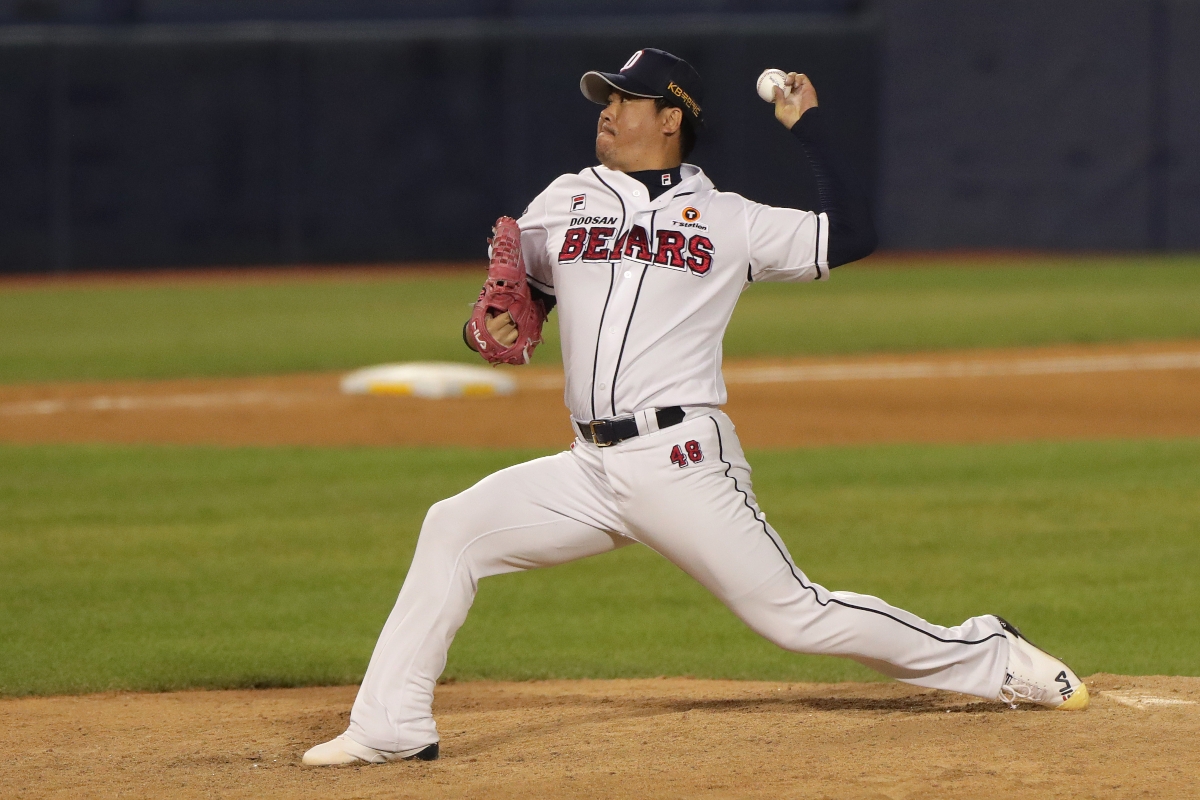 Pitcher Lee Hyun-Seung #48 of Doosan Bears throws in the top of the eighth inning during the KBO League game between the Samsung Lions and the Doosan Bears at the Jamsil Stadium on June 17, 2020, in Seoul, South Korea. (Han Myung-Gu/Getty Images)

The outbreak of COVID-19 has forced Major League Baseball (MLB) to postpone the start of the 2020 season. But that doesn’t mean there’s no baseball to watch. Increasing numbers of American fans, desperate for a fix, have discovered the Korea Baseball Organization (KBO).

Launched in 1981, the KBO has become one of the world’s best professional baseball associations. It boasts a dedicated, loyal fan base as well as internationally recognizable players. As with MLB, the KBO delayed the start of its season as South Korea dealt with COVID-19. But after the country’s successful suppression of the virus, the season began — without fans in the seats — on May 5. From the start of the season, ESPN has broadcasted KBO games to audiences in the United States, giving Americans a unique glimpse into a sporting experience at once familiar and new.

Join Asia Society as we take a deep dive into the world of Korean baseball. Our guests are Jee-ho Yoo, a Seoul-based baseball correspondent for the Yonhap News Agency; and Han Lee, a player agent and the CEO of Global Sporting Integrated. The conversation will be moderated by Dan Kurtz, founder of MyKBO.net.

Jee-ho Yoo is a sportswriter for the English News Desk at the Yonhap News Agency in Seoul. He has over 15 years of experience reporting on major South Korean sports, such as baseball, soccer, basketball, volleyball, and golf. He has also covered major international sporting events such as the Summer and Winter Olympics, the Summer and Winter Asian Games, the FIFA World Cup, and the World Baseball Classic. Yoo is a regular contributor to English-language radio stations in Seoul. He earned a Bachelor of Arts degree in history at the University of Toronto.

Han Lee is the founder and CEO of Global Sporting Integration (GSI), a sports agency representing professional baseball players. Lee has been working as a player agent for numerous players transitioning between Major League Baseball and professional baseball leagues in Asia. He earned his Bachelor of Arts in International Relations and Business Management from Michigan State University and a Juris Doctor degree from Temple University Beasley School of Law.

Dan Kurtz (Moderator) is the founder of MyKBO.net, an English-language website launched in 2003 that provides comprehensive information and analysis about the Korea Baseball Organization. Born in South Korea, Kurtz grew up in eastern Pennsylvania and attended his first KBO game in 2000. He has traveled, lived, and worked extensively in South Korea over the last 20 years and now lives in Tacoma, Washington.