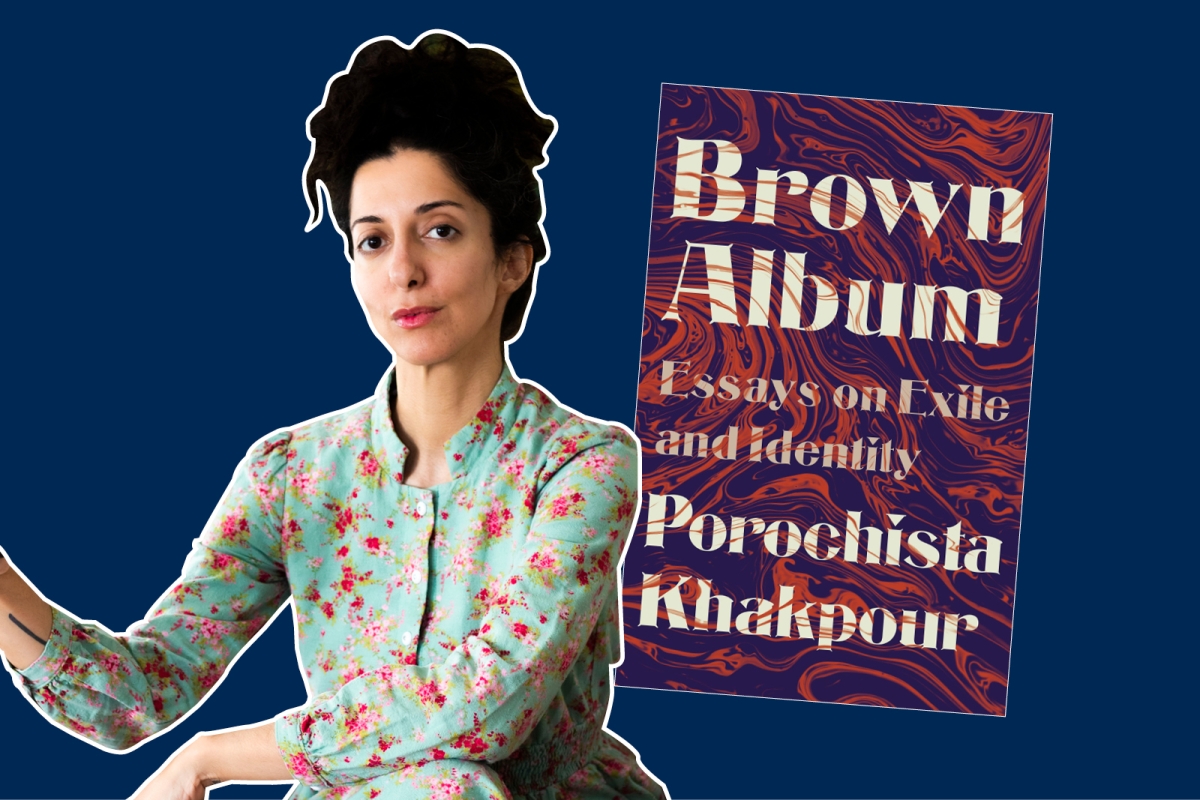 “A collection that is by turns raw and wry, witty, and heartbreaking. Above all, it is a fearless reflection of an immigrant searching for home and for herself.”

Join us for a virtual book club led by author Porochista Khakpour to discuss her book Brown Album. From the much-acclaimed novelist and essayist, this beautifully rendered, poignant collection of personal essays chronicles immigrant and Iranian-American life in our contemporary moment.

Gather with others online to reflect, discuss, and connect after diving into Brown Album. We will start with an introduction from book club host Khakpour, followed by discussion in smaller groups of book club participants. Finally, all are invited to join in conversation and Q&A with Khakpour moderated by author Hooman Majd. Our book club provides a welcoming virtual space for authentic and humanizing connections, including meaningful and fun conversations, and the opportunity to meet others with shared interests. Please feel free to join even if you haven’t read the entire book.

About the book
Novelist Porochista Khakpour’s family moved to Los Angeles after fleeing the Iranian Revolution, giving up their successes only to be greeted by an alienating culture. Growing up as an immigrant in America means that one has to make one’s way through a confusing tangle of conflicting cultures and expectations. And Porochista is pulled between the glitzy culture of Tehrangeles, an enclave of wealthy Iranians and Persians in LA, her own family’s modest life and culture, and becoming an assimilated American. Porochista rebels–she bleaches her hair and flees to the East Coast, where she finds her community: other people writing and thinking at the fringes. But, 9/11 happens and with horror, Porochista watches from her apartment window as the towers fall. Extremism and fear of the Middle East rises in the aftermath and then again with the election of Donald Trump. Porochista is forced to finally grapple with what it means to be Middle-Eastern and Iranian, an immigrant, and a refugee in our country today.

Full description of the book and purchase options here, including e-book and audio options for immediate access. E-book copies may also be available to borrow from your local library.

About our host
Porochista Khakpour’s debut novel, Sons and Other Flammable Objects, was a New York Times Editor’s Choice, one of the Chicago Tribune‘s Fall’s Best, and the 2007 California Book Award winner in the First Fiction category. Her second novel The Last Illusion was a 2014 “Best Book of the Year” according to NPR, Kirkus Reviews, BuzzFeed, PopMatters, Electric Literature, and many more. Among her many fellowships is a National Endowment for the Arts award. Her nonfiction has appeared in many sections of The New York Times, the Los Angeles Times, Elle, Slate, Salon, and Bookforum, among many others. She has been guest faculty at VCFA and Stonecoast’s MFA programs, as well as Contributing Editor at Evergreen Review. Born in Tehran and raised in the Los Angeles area, Khakpour currently lives in New York City.

About our moderator
Hooman Majd is an author and writer based in New York, and a contributor at NBC News. He has written for The New Yorker, The New York Times, TIME, Newsweek, The Financial Times, and Interview Magazine, among others. Majd is the author of The New York Times bestseller The Ayatollah Begs to Differ (Doubleday, 2008), and The Ayatollahs' Democracy (Norton, 2010). His most recent book on Iran, The Ministry of Guidance Invites You to Not Stay, was published by Doubleday in 2013.

Majd has appeared on numerous television and radio shows, including on Real Time with Bill Maher, The Daily Show with Jon Stewart, Charlie Rose, NBC News and many others, and on numerous NPR programs. Prior to his career as a journalist and author, Majd worked as an executive in the entertainment industry.

This event is free and registration is required.

For event details visit https://asiasociety.org/new-york/events/virtual-book-club-brown-album-porochista-khakpour This event is free and registration is required.