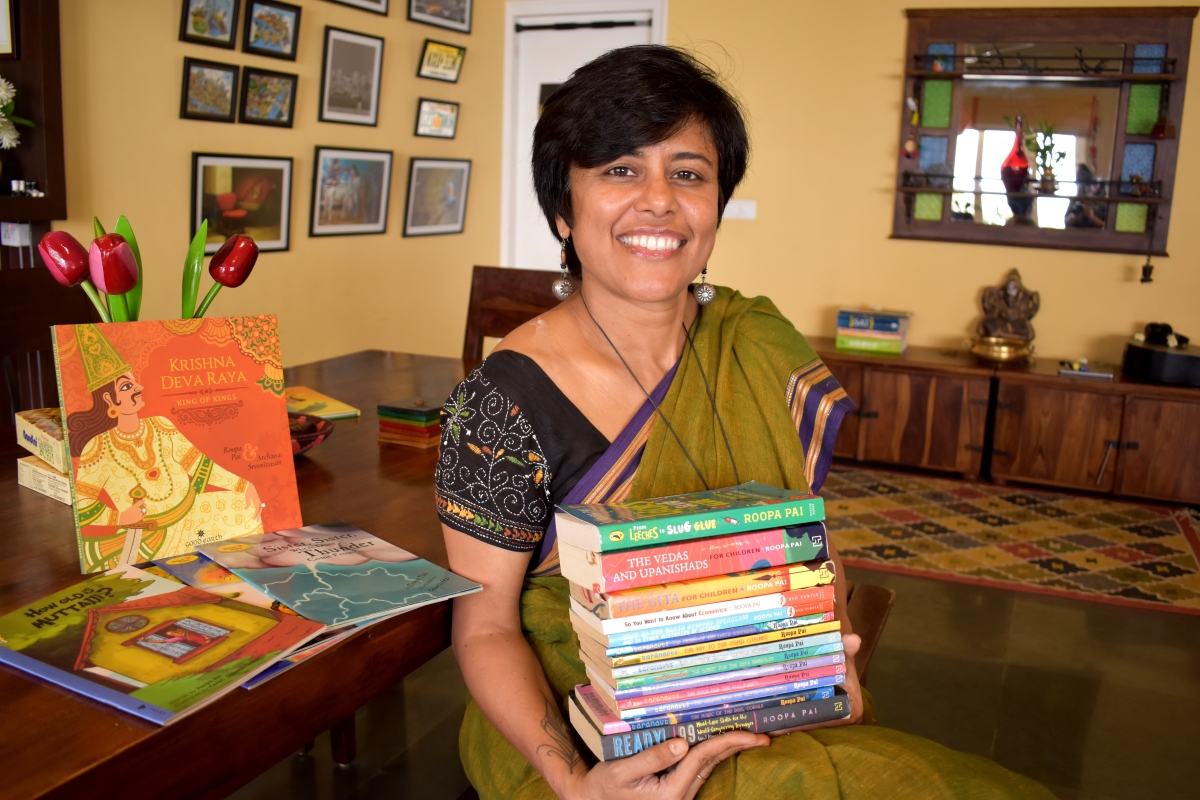 Thousands of years ago, deep inside the forests of India, a great ‘thought revolution’ was brewing. Using their own bodies and minds as laboratories, the brightest minds of the age were engaged in a grand quest – to find answers to some of humanity's existential questions – Who am I? Where did I come from? What is the purpose of my life? And, inevitably, What happens after death? Their single-minded efforts produced answers that were so explosive, reassuring, empowering, and liberating that the world continues to be drawn toward them in the 21st century.

Come explore some of these timeless lessons with bestselling Indian author Roopa Pai – lessons that enable all human beings, irrespective of their race, religion, geography, gender, or culture, to live joyously and fearlessly in a manner that honors our radiant, invincible spirits.

Roopa Pai is one of India’s best-known writers for children. This Bangalore-based author has written over 25 books, ranging from picture books to chapter books and fiction to non-fiction, on themes as varied as sci-fi fantasy, popular science, mathematics, history, economics, Indian philosophy, life skills, and most recently, medicine. Many of her books are bestsellers and are enjoyed as much by adults as by children. Her best-known books include the 8-part Taranauts, India’s first fantasy-adventure series for children in English, Ready! 99 Must-Have Skills For The World-Conquering Teenager (And Almost-Teenager), the award-winning national bestseller The Gita For Children, listed by Amazon India as one of 100 Indian Books To Read In A Lifetime, and its ‘prequel The Vedas And Upanishads For Children. Her TEDx talk Decoding The Gita, India’s Book Of Answers has received over 1.8 million views to date. Her most recent book for children is From Leeches To Slug Glue: 25 Explosive Ideas That Made (And Are Making) Modern Medicine. When she is not writing, Roopa can be found leading groups of children and young people on history and heritage walks across her beloved Karnataka as part of her job as director of a company she co-founded, BangaloreWalks.

Randhir Jaiswal (introductory remarks) is the Counsul General of India, New York. He joined the Indian Foreign Service in 1998. In over two decades of a diplomatic career, he has served in Portugal, Cuba, South Africa, and at the Permanent Mission of India in New York. Between his overseas assignments, he served in New Delhi at the Ministry of External Affairs, first as Deputy Secretary looking after India’s relations with the United States of America, and then as Joint Secretary managing India’s relations with West European countries. In the middle of 2017, he was deputed to serve the President of India as Joint Secretary managing his international relations portfolio. He has served as Consul General of India in New York since 2020.

Anu Sehgal (introductory remarks) is the Founder of The Culture Tree. She lives in New York with her husband and her two sons. She is a marketer by profession. She holds an MBA from Yale University and has worked in the corporate sector for almost 15 years. Anu grew up in India and is a native Hindi speaker. She is an active parent and believes awareness of one’s heritage, culture, and language is key for children to become self-aware and confident individuals. Anu founded her company, The Culture Tree, five years ago with a desire to fill a vacuum for quality and educational South Asian events and classes all over the US. Her company continues to grow and expand.

Neelam Chowdhary (moderator) is the Vice President of Education at Asia Society. In this role, she is responsible for overseeing the department’s strategy and direction for youth and family programming, focused on Asian and Asian American languages, histories, and cultures. Neelam has extensive experience in the K-12 field, particularly in global competence and entrepreneurship education. She is the co-author of Entrepreneurship: Owning Your Future (2009) and Exploring Careers for the 21st Century (2011). Neelam has worked as an educator in both Los Angeles and New York City public schools and is a National Board Certified Teacher.

Asia Society is proud to present this program in partnership with the Consulate General of India, New York.

The Culture Tree provides South Asian-themed educational and cultural programs that enrich the lives of children and their families and promotes a deeper connection with their roots and the world around them. They partner with museums, galleries, schools, and libraries to implement classes and programming.  Programs include celebrations of key festivals and events, puppet shows, bilingual storytime, mindful eating, mindfulness, and language classes in key South Asian languages.