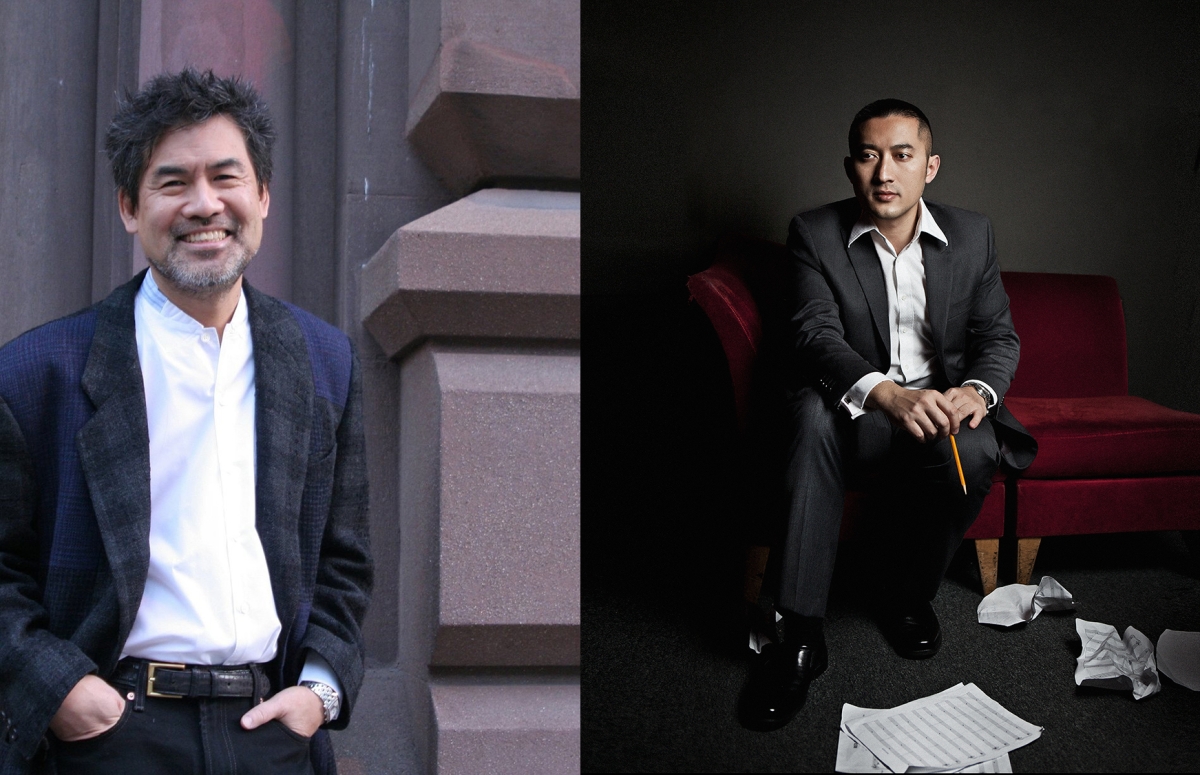 Asia Society and the Santa Fe Opera’s 2020 Season proudly present the exclusive working rehearsal of Huang Ruo and David Henry Hwang's new opera, M. Butterfly. Based on Hwang’s 1988 Tony Award-winning and Pulitzer-Prize finalist Broadway play, M. Butterfly is the story of Rene Gallimard, a French diplomat who carried on a 20-year love affair with Song Liling, a Peking opera star with an astonishing secret that leads to Gallimard's professional and personal ruin. The story’s many parallels with Puccini’s well-known Madama Butterfly are echoed in the new opera’s music, composed by the celebrated young Chinese American composer Huang Ruo. With Kangmin Justin Kim (countertenor) as Song Liling and David Bizic (baritone) as Rene Gallimard.

Huang Ruo's (composer) first collaboration with The Santa Fe Opera was the American premiere of Dr. Sun Yat-sen, his first opera, in 2014. Admitted to the Shanghai Conservatory at age twelve, Chinese-born Huang Ruo moved to the U.S. to continue his education, earning a BM from Oberlin’s Conservatory of Music and MM and DMA degrees from Juilliard. Now a U.S. citizen, The New Yorker cited Huang Ruo as “one of the most intriguing of the new crop of Asian-American composers.” His writing spans orchestra, chamber music, opera, theater, and modern dance to sound installation, multimedia, folk rock, and film. Reflecting his life story, he strives to create a seamless integration between Eastern and Western elements, integrating influences from Chinese folk, Western avant-garde, rock, and jazz to create a seamless, organic whole.

David Henry Hwang’s (librettist) stage works includes the plays M. Butterfly, Chinglish, Yellow Face, Kung Fu, Golden Child, The Dance and the Railroad, and FOB, and the Broadway musicals Aida (co-author), Flower Drum Song (2002 revival) and Disney’s Tarzan. Hwang is a Tony Award winner and three-time nominee, a three-time Obie Award winner, and a two-time Finalist for the Pulitzer Prize. He is also America’s most-produced living American opera librettist (two Grammy Awards), and co-wrote the Gold Record Solo with the late pop icon Prince. Since 2015, he has been a Writer/Consulting Producer for the Golden Globe-winning television series The Affair. Hwang serves as Head of Playwriting at Columbia University School of the Arts, and as Chair of the American Theatre Wing. His newest work, Soft Power, a collaboration with composer Jeanine Tesori, will receive its New York premiere this fall at the Public Theater.

This season David adds new roles to his repertoire with his return to Toulon as Belcore (L’Elisir d’amore) and he sings Escamillo (Carmen) in Dijon as well as making his Italian debut in the same role at the Macareta Festival. He also returns again to the Metropolitan Opera as Marcello (La Bohème).

Kangmin Justin Kim (countertenor) is one of the most sought-after countertenors of his generation, having earned accolades in roles of the Baroque repertoire, contemporary music, and in Mozart’s trouser parts. Engagements of the 2018/19 season include his Covent Garden debut as Cherubino in Le nozze di Figaro conducted by Sir John Eliot Gardiner, his debut at the Staatsoper Unter den Linden in Berlin as Nerone in L’incoronazione di Poppea, Idelberto in a new production of Lotario in Bern, Idamante in a new staging of Idomeneo at Staatstheater Wiesbaden and Megacle in Vivaldi’s L’Olimpiade with the Orchestra La Cetra conducted by Andrea Marcon in Basel and Herne.

Recently he was heard as Nerone in L’incoronazione di Poppea and Speranza in L’Orfeo at the Salzburg Festival, New York Lincoln Center, Philharmonie of Paris and Berlin, Harris Theatre in Chicago, Edinburgh Festival, Lucerne Festival and the Teatro La Fenice in Venice conducted by Gardiner, Cesare in Vivaldi’s Catone in Utica and Orlofsky in a new production of Die Fledermaus at the Oper Köln, Orfeo in Handel’s Parnasso in festa at the Concertgebouw Amsterdam conducted by Andrea Marcon, in Giulio Cesare for his Glyndebourne debut conducted by William Christie, in a staged production of Handel’s Jephtha at Maifestspiele Wiesbaden, in his debut at the Teatro San Carlo of Naples in Britten’s Canticles alongside Ian Bostridge, in Carmina Burana with the Seoul Philharmonic Orchestra, as Barzane in Vivaldi’s Arsilda with the Collegium 1704 in Bratislava, Caen, Lille, Luxembourg, and Versailles, Speranza in L’Orfeo at the Opéra de Dijon, and Romeo in Zingarelli’s Giulietta e Romeo at the Rokokotheater of Schwetzingen.

Kangmin Justin Kim was born in South Korea and grew up in Chicago. He studied voice, opera, and musical theater at Northwestern University in Evanston, Illinois and the Royal Academy of Music in London.

M Butterfly explores ideas and themes closely related to the upcoming Asia Society Triennial, a festival of art, ideas and innovation, opening in June of 2020.

The world premiere preview of M. Butterfly is a collaboration between the Asia Society and the Santa Fe Opera and is developed with assistance from the American Lyric Theater with generous support from Agnes Hsu-Tang PhD and Oscar Tang.