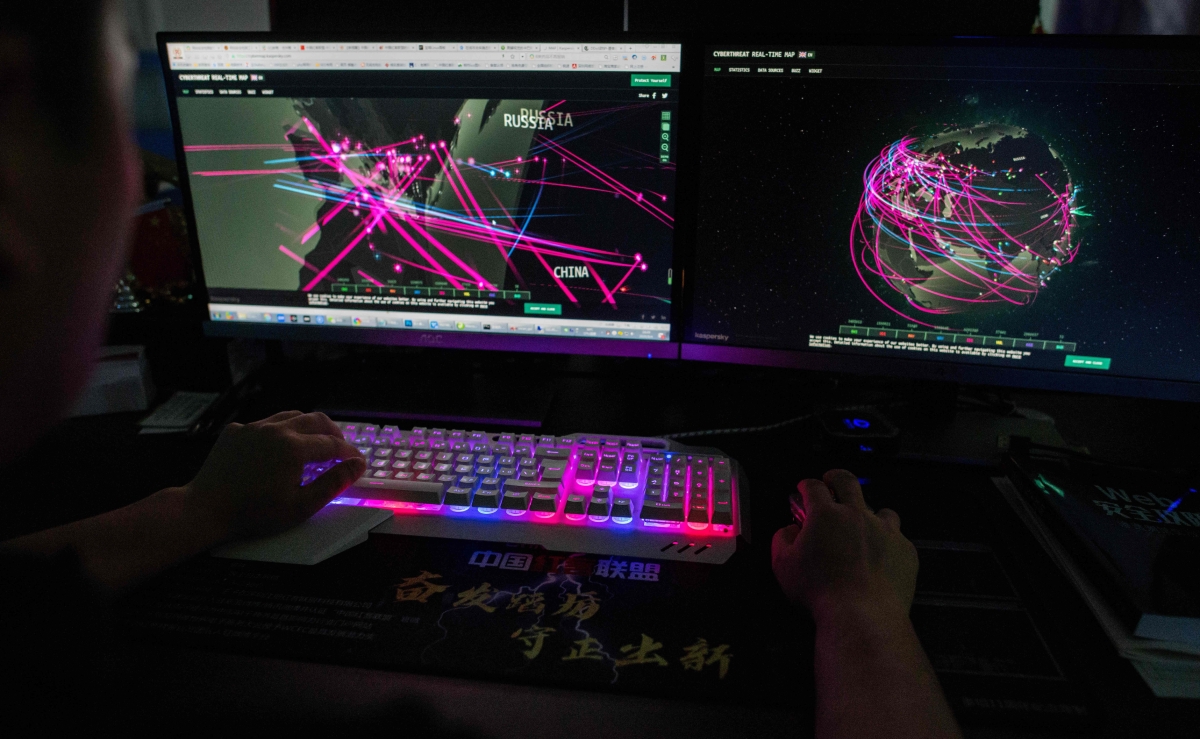 A member of the hacking group Red Hacker Alliance uses a website that monitors global cyberattacks on his computer at their office in China's southern Guangdong province (NICOLAS ASFOURI/AFP/Getty Images).

Even before the COVID-19 pandemic, governments and the private sector have worked to secure their networks against cyberattacks — from both individuals and other governments, and the level of threat ranging from nuisance to a systemic breakdown resulting in destruction beyond cyberspace. Since the pandemic started, hackers have taken advantage of the increased use of technologies, as people are having to connect remotely to continue business as usual. Against this backdrop, governments are concerned over the next generation of telecommunications infrastructure and hardware, and potential vulnerabilities that may come if purchased from Huawei. Lines are being drawn and there is growing competition to lead in technologies managing the world's communications and information. Along with it is the development of an emerging field: artificial intelligence (AI) and machine learning.

Japan occupies a special position in Asia as one of the world's most technologically advanced and highly-developed economies, and as a treaty ally of the U.S. Having weathered significant changes since the end of World War II, Japan is no stranger to the evolving security environment in the region. Join us for a conversation with Mihoko Matsubara, Chief Cybersecurity Strategist for the Nippon Telegraph and Telephone Corporation, and General Sadamasa Oue (Ret.), formerly of the Japan Air Self-Defense Force, on Japan's approach to emerging challenges in cyberspace and artificial intelligence and how the country is coordinating with its partners — namely the U.S. Moderated by Columbia University's Takako Hikotani.

Mihoko Matsubara is Chief Cybersecurity Strategist, NTT Corporation, Tokyo, and is responsible for cybersecurity thought leadership. She is the author of Cybersecurity: Cybersecurity to Protect the Way of Our Digital Life (2019). Previously, she worked at the Japanese Ministry of Defense before completing her MA at the Johns Hopkins School of Advanced International Studies through the Fulbright program, and served on the Japanese government’s Cybersecurity Research and Development policy committee between 2014 and 2018. She is an adjunct fellow at the Pacific Forum in Honolulu and associate fellow at the Henry Jackson Society in London.

General Sadamasa Oue (Ret.) is Senior Fellow at the Harvard University Asia Center and associate at Harvard University's Weatherhead Center for International Affairs' Program on U.S.-Japan Relations, where his research interests are in AI, AI's military application, Asian security, and the U.S.-Japan Alliance. His research project is on Adapting the Japan-U.S. Alliance: Great Power Competition and New Security Challenges. He previously served in Japan's Air Self-Defense Force, most recently as Commander of the Northern Air Defense Command and the Air Materiel Command. Throughout his distinguished career, he was involved with policy development, program promotion, and budget requests regarding Ballistic Missile Defense, F-35 introduction, Joint Staff reorganization, and more.

Dr. Takako Hikotani (moderator) is Gerald L. Curtis Associate Professor of Modern Japanese Politics and Foreign Policy. She previously taught at the National Defense Academy of Japan, where she was associate professor, and lectured at the Japan's Ground Self Defense Force and Air Self Defense Force Staff Colleges, and the National Institute for Defense Studies. Her publications (in English) include, "The Japanese Diet and Defense Policy-Making,” International Affairs; “Trump’s Gift to Japan: Time for Tokyo to Invest in the Liberal Order,” Foreign Affairs; and “Japan’s New Executive Leadership: How Electoral Rules Make Japanese Security Policy" with Margarita Estevez-Abe and Toshio Nagahisa, in Frances Rosenbluth and Masaru Kohno eds., Japan in the World (2009). She was a Visiting Professional Specialist at Princeton University, a Social Science Research Council/Abe Fellow (2010-2011), and is a U.S.-Japan Leadership Program Fellow at the U.S.-Japan Foundation (2000- ).