How China’s Zero COVID Protests Connect to the Past 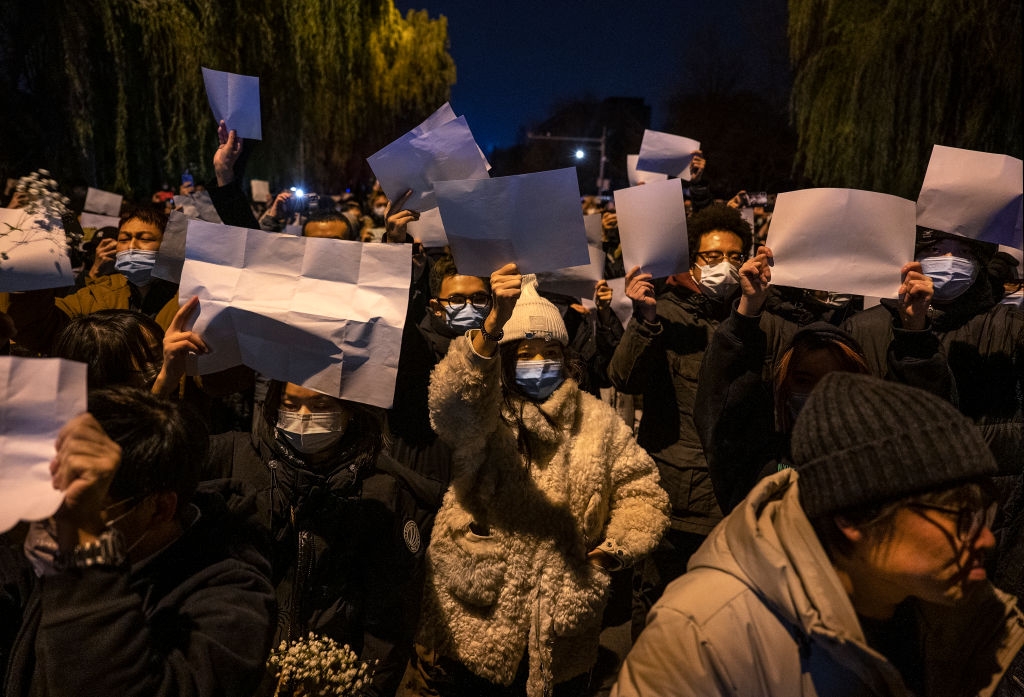 China’s history of popular protests includes more than one example of a single event exposing widespread underlying frustration and yearning for change. Protests that broke out around China in recent days, after a building fire in Urumqi killed 10 people who many Chinese believe were trapped there by a Zero COVID lockdown, is one of those times. It comes after almost three years of such lockdowns, a decade into increasing restrictions and surveillance under President Xi Jinping, and just weeks after Xi was granted a third term as CCP General Secretary. Protesters around the country have demanded an end to the Zero COVID policy, with some going further — both on the streets and in satirical and sassy social media memes — and openly calling for political change. How does this happen after a decade of Xi trying to suppress such dissent? What is the context for these protests, both in current societal terms and in China’s history of protest? And what does it tell us about challenges facing China’s Communist Party?

Wang Dan a prominent Chinese pro-democracy advocate who has been nominated three times for a Nobel Peace Prize. A student leader of the Tiananmen Square protests of 1989, he was imprisoned in China until February 1993, released and then given an 11-year sentence in 1995 on the charge of plotting to subvert the government. He accepted exile in the United States in 1998, earned a PhD in history at Harvard University, and for several years taught cross-Strait history at Taiwan’s National Chengchi University and National Tsing Hua University. He founded and leads the Dialogue China think tank and newsletter.

Guoguang Wu is Senior Fellow on Chinese Politics at the Asia Society Policy Institute's Center for China Analysis, and a senior research scholar at the Stanford Center on China’s Economy and Institutions, Stanford University. A former journalist and political commentator for The People’s Daily in China and, concurrently, a policy adviser on political reform and a speechwriter to the Zhao Ziyang leadership, he earned his PhD in politics from Princeton University. His books include China’s Party Congress: Power, Legitimacy, and Institutional Manipulation (2015) and Globalization against Democracy: A Political Economy of Capitalism After its Global Triumph (2017), and his research specializes in issues including Chinese politics and comparative political economy, transition from communism, and China’s search for its position in the world.

Melinda Liu is Beijing Bureau Chief for Newsweek Magazine, and has reported on China for much of her career. She’s lived and worked in Beijing since November 1998, returning to a city in which she had resided from 1980 to 1982 as Newsweek’s first Beijing Bureau Chief.  In her career, Liu has covered China's post-Mao modernization; the Soviet occupation of Afghanistan and the fall of the Taliban; the 1991 liberation of Kuwait; and U.S. military interventions in Somalia and Haiti. In 2003, she was one of few American journalists in Baghdad's Palestine Hotel as a firsthand witness to the U.S. “shock and awe” bombing of the Iraqi capital and the fall of Saddam Hussein.  Liu won the 2006 Shorenstein Journalism Award in recognition of her reporting on Asia.

Orville Schell is the Arthur Ross Director of the Center on U.S.-China Relations at Asia Society, and a former dean of the University of California, Berkeley, Graduate School of Journalism. Schell is the author of fifteen books, ten of them about China, and a contributor to numerous edited volumes, including The New Yorker, the Atlantic, The New York Times, The Nation, and The New York Review of Books. His most recent book My Old Home: A Novel of Exile, was published in 2021. Schell worked for the Ford Foundation in Indonesia, covered the war in Indochina as a journalist, and has traveled widely in China since the mid-‘70s.

Bates Gill (moderator) is Executive Director of Asia Society Policy Institute’s Center for China Analysis where he leads a team of research fellows, associated researchers, and administrative staff to deliver on the Center’s aim to be a global leader for policy-relevant, objective analysis of China’s politics, economy, and society and its impact on Asia and the world. Prior to joining the Asia Society, he was professor and chair of the Department of Security Studies and Criminology at Macquarie University in Sydney and was the inaugural Scholar-in-Residence with the Asia Society Australia.  In previous roles, he served as director of the Stockholm International Peace Research Institute (SIPRI), as the Freeman Chair in China Studies at the Center for Strategic and International Studies, and as founding director of the Center for Northeast Asian Policy Studies at the Brookings Institution.