A Conversation with the Hon. Leni Robredo, 14th Vice President of the Philippines | Asia Society Skip to main content

A Conversation with the Hon. Leni Robredo, 14th Vice President of the Philippines 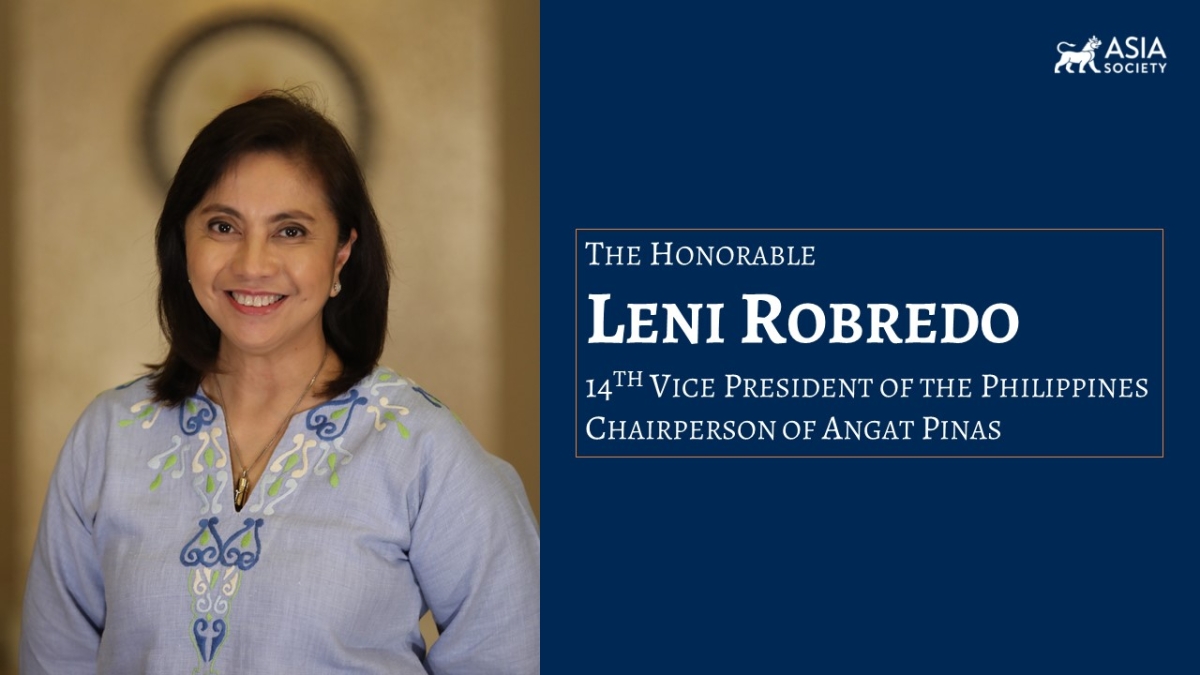 ***This program is by-invitation-only***

Join us for a conversation with the Hon. Leni Robredo, 14th Vice President of the Philippines and Chairperson of Angat Pinas and Asia Society Policy Institute Council's Ambassador Frank Wisner. Among a range of topics, she will discuss her work on combatting disinformation and Angat Pinas Inc., an organization she set up after leaving government service to engage and empower volunteers across the Philippines. Angat Pinas is a continuation of a similar advocacy-centered program she instituted while she served as Vice President, which had focused on poverty alleviation, health, education, community engagement, and more.

The Hon. Leni Robredo is Chairperson of Angat Pinas and Harvard Kennedy School's Hauser Leader for the Fall 2022 semester. She previously served as the 14th Vice President of the Philippines from 2016-2022, following her service as a member of the Philippines House of Representatives for the Third District of Camarines Sur. Prior to entering politics, she worked as a lawyer at the NGO Center for Alternative Legal Aid (SALIGAN) in Bicol for over ten years--providing legal support for disadvantaged individuals in court and legal education for clients, including translating important laws into Bicolano for the Bicol community.

Ambassador Frank Wisner is International Affairs Advisor at Squire Patton Boggs and a member of the Board of Directors of the Squire Patton Boggs Foundation. Before joining the firm, he served as Vice Chairman of External Affairs for American International Group. Ambassador Wisner's diplomatic career spans four decades and eight American presidents. He served as ambassador to Zambia, Egypt, the Philippines, and India during his extensive career in the State Department. He has served as Under Secretary of Defense for Policy and as Under Secretary of State for International Security Affairs. He was senior Deputy Assistant Secretary for African Affairs from 1982 to 1986, a time of intense diplomatic engagement in Southern Africa. He is a member of the Asia Society Policy Institute Council.

***This program is by-invitation-only. For inquiries, please e-mail globalinitiatives@asiasociety.org***