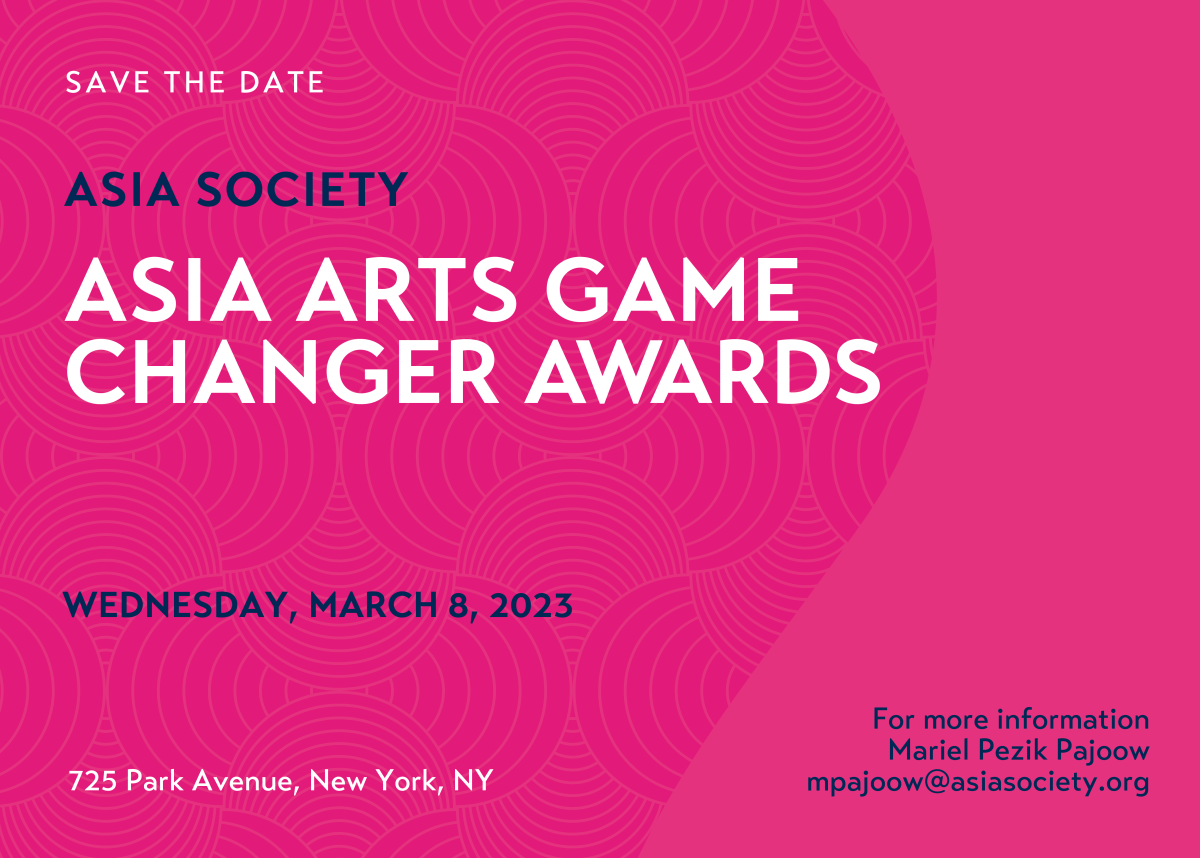 This year, we will be honoring trailblazing Asian artists across the arts including arts visionary Swati Bhise, acclaimed musician Wu Man, and groundbreaking visual artist Tsherin Sherpa. In addition, we will recognize the contributions and achievements of Hon. Dr. Kevin Rudd, President and CEO of Asia Society, who will soon become the Australian Ambassador to the United States. During the cocktail reception, we will be presenting excerpts from In the Green Room, a dynamic music performance commissioned and produced by Asia Society and conceived by composer/vocalist/multi-instrumentalist Jen Shyu, and composer/pianist Sumi Tonooka, harnessing the power of jazz and storytelling, in a new innovative performance.

This celebration is Asia Society’s biggest fundraiser for its Arts and Culture sector and for the Asia Society Museum’s exhibitions, and it is also a vital source of our programmatic funding. For more information, please contact Mariel Pezik Pajoow at mpajoow@asiasociety.org. The RSVP form is available for download here.

Swati Bhise initially made her mark as a reputed Bharatanatyam Dancer by synthesizing key elements of classical dramaturgy into both traditional and contemporary choreography in the performing arts. In 1977, Swati remains the first disciple of Padma Vibhushan Dr. Sonal Mansingh. Since her debut performance at The Center of Indian Classical Dances in New Delhi, she has performed extensively around the world at venues including the National Centre for the Performing Arts (India), Lincoln Center, Asia Society, Symphony Space, The Metropolitan Museum of Art, SPIC MACAY, and the House of Soviet Culture, among others.

Swati Bhise is the Director, Writer & Producer of a period drama film, The Warrior Queen of Jhansi, based on the life of the iconic Rani of Jhansi. The film released in November 2019 in theatres across America, India, and Canada and VOD release in 2020 and further global release in Australia, New Zealand, UK & Middle East in 2020. The film was the first Hollywood action film in history with a female Indian lead and received the Film of Impact Award at the Vancouver International Women in Film Festival and the prestigious ReFrame Stamp for gender parity in film. The Warrior Queen of Jhansi is a salute to the iconic Indian Queen, Rani Lakshmibai, whose empowered spirit continues to stay relevant 180 years after her demise. To celebrate this spirit, she awarded 11 incredible women across India & USA with the “Spirit of the Rani” award for their pathbreaking work to bring in social transformation.

Prior to this, she served as Executive Producer and Indian cultural consultant on The Man Who Knew Infinity, an Ed Pressman Film starring Dev Patel and Jeremy Irons. The film premiered at the Toronto Film Festival and went on to screen at The White House to critical acclaim and open festivals in Zurich, India, Dubai, and Singapore, among others. She has served on numerous panels including the five-member grand jury at the 9th annual Mahindra Excellence in Theatre Awards (META).

She served as a virtual ambassador of Indian culture and classical arts in New York for 35 years and founded Sanskriti Centre, a nonprofit organization that promoted Indian artists and introduced Indian classical arts to a generation of American children. In addition to a deep study of music, dance and theatre, she has graduated with Indian and Chinese history that has led her to combine different artistic mediums including North and South Indian music with western classical Jazz. In 2017 she was invited to open the renowned Newport Jazz Festival with her original Carnatic-Jazz fusion composition. In 2015, she conducted her first Jazz and Carnatic music symphony at Jazz at Lincoln Centre to a full house, winning her wide acclaim in the Wall Street Journal.

A multifaceted performer, Swati has worked as a choreographer, actress, script-writer, TV show host with “Spotlight on Culture”, New York correspondent for Sruti magazine, and curator of art festivals in New York and India. Swati’s contributions range from performances at the U.N. General Assembly, choreography of Broadway shows including The Mystery of Edwin Drood and Transposed Heads, and acting in operas such as Daddy meets Durga.

She is also an outspoken advocate for women’s empowerment with a focus on South East Asia and The Warrior Queen of Jhansi was the culmination of many years of work in this sphere. She is a Lotus Circle advisor for The Asia Foundation, which serves to empower women and girls in Asia through education.

Recognized as the world’s premier pipa virtuoso, Wu Man is a soloist, educator, and composer who gives her lute-like instrument—which has a history of more than 2,000 years in China—a new role in both traditional and contemporary music. She has premiered hundreds of new works for the pipa, while spearheading multimedia projects to both preserve and create global awareness of China’s ancient musical traditions. Projects she has initiated have resulted in the pipa finding a place in new solo and quartet works, concertos, opera, chamber, electronic, and jazz music as well as in theater productions, film, dance, and collaborations with visual artists. She has performed in recital and with major orchestras around the world, is a frequent collaborator with ensembles such as the Kronos and Shanghai Quartets and The Knights, and is a founding member of the Silkroad Ensemble. She has appeared in more than 40 recordings throughout her career, including the Silkroad Ensemble’s Grammy Award-winning recording Sing Me Home, featuring her composition “Green (Vincent’s Tune).” She is also a featured artist in the 2015 documentary The Music of Strangers: Yo-Yo Ma and the Silk Road Ensemble.

Born in Hangzhou, China, Wu Man studied at the Central Conservatory of Music in Beijing, where she became the first recipient of a master's degree in pipa. At age 13, she was hailed as a child prodigy and became a nationally recognized role model for young pipa players. She subsequently received first prize in the First National Music Performance Competition, among other awards, and participated in many premieres of works by Chinese composers. She moved to the U.S. in 1990 and was awarded the Bunting Fellowship at Harvard University in 1998. She was the first Chinese traditional musician to receive the United States Artist Fellowship (2008) and the first artist from China to perform at the White House. In 2013, she was named Musical America’s Instrumentalist of the Year and in 2021 she received an honorary Doctorate of Music from the New England Conservatory of Music. She is a Visiting Professor at her alma mater the Central Conservatory of Music in Beijing and a Distinguished Professor at the Zhejiang and the Xi'an Conservatories.

Born in Kathmandu, Nepal in 1968, Tsherin Sherpa currently works and lives between Kathmandu (Nepal) and Northern California (USA). He was trained in thangka painting by his father Master Urgen Dorje, eventually drawing on this vocabulary to create artworks that incorporate Buddhist iconography and pop culture references. His works offer an interplay and tension between sacred/secular, traditional/contemporary, settlement/movement. Sherpa’s practice stems from his personal experiences within the Himalayan Diaspora as well as the nomadic history of Himalayan people. His experimentations with visual languages adapt, reimagine, and reappropriate identities, symbols, colors, and gestures to surpass their chronological and cultural constrictions.

Sherpa has exhibited across the United States, Europe and Asia that includes representing Nepal at the inaugural participation at the Venice Biennale in 2022. He has also been part of Yokohama Triennale (2020); Yinchuan Biennale (2018); Kathmandu Triennale (2017); Asia Pacific Triennial of Contemporary Art, Brisbane (2015-16); and Dhaka Art Summit (2014).

The Hon. Dr. Kevin Rudd AC is President and CEO of the Asia Society and inaugural President of the Asia Society Policy Institute. He served as 26th Prime Minister of Australia (2007 to 2010, 2013) and as Foreign Minister (2010 to 2012). He is Chair of the Board of the International Peace Institute in New York, and Chair of Sanitation and Water for All – a global partnership of government and non-governmental organizations dedicated to the implementation of Sustainable Development Goal 6. He is a Distinguished Fellow at Chatham House and the Paulson Institute, and a Distinguished Statesman with the Center for Strategic and International Studies. He is also a member of the Comprehensive Nuclear Test Ban Treaty Organization’s Group of Eminent Persons.