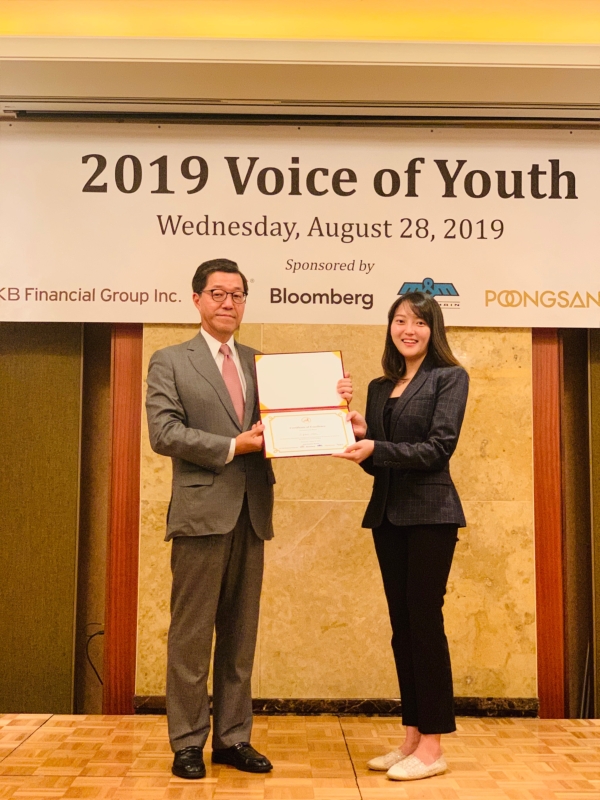 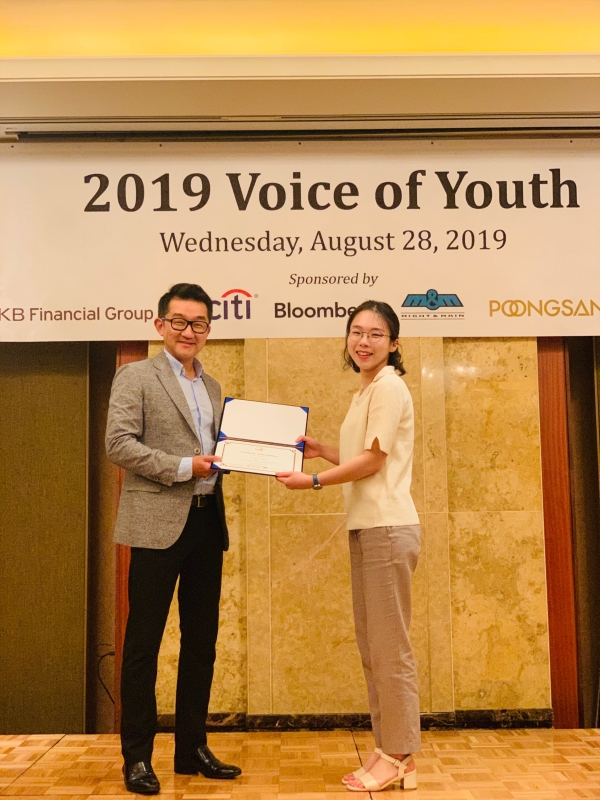 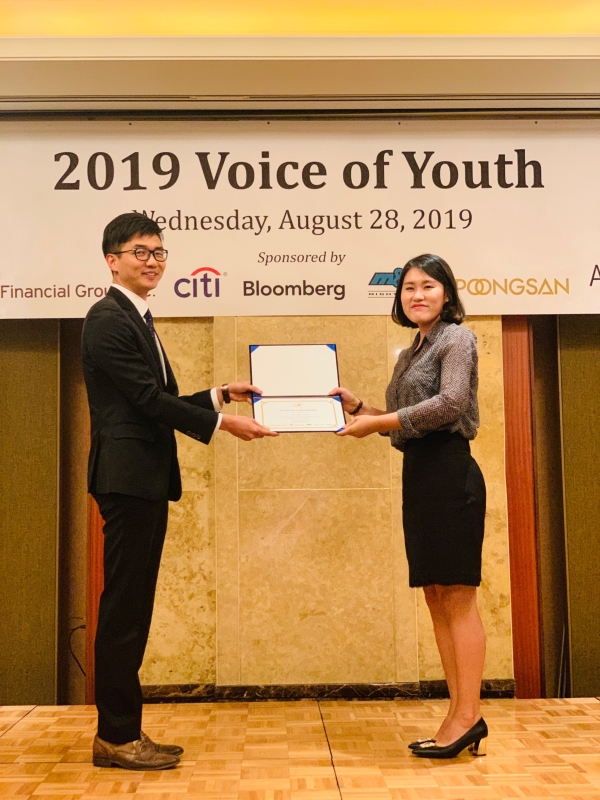 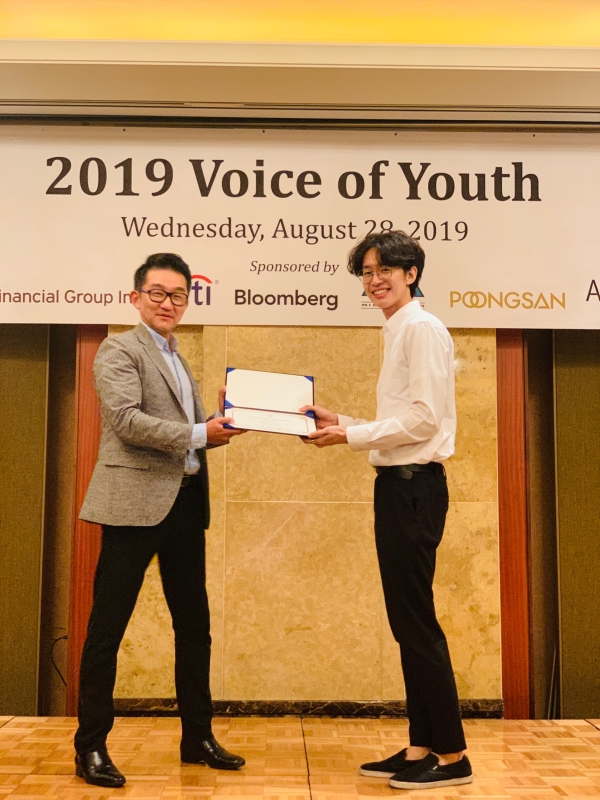 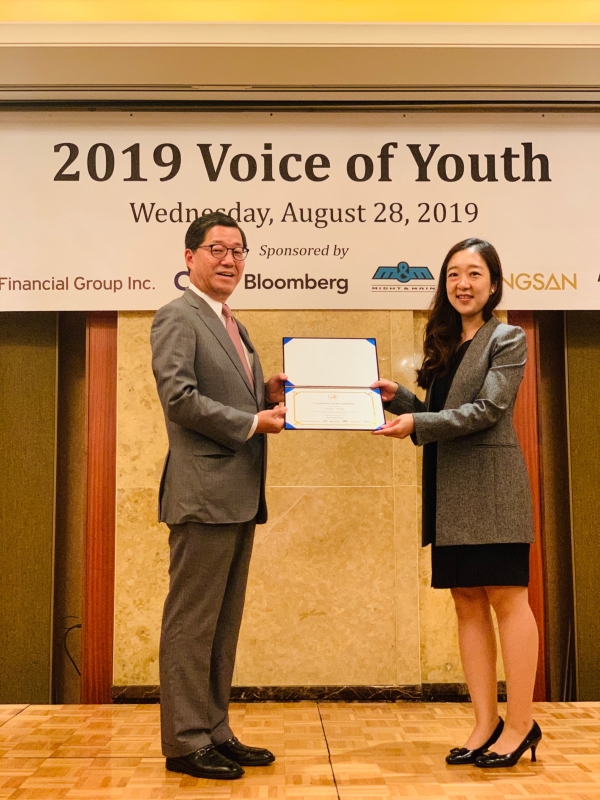 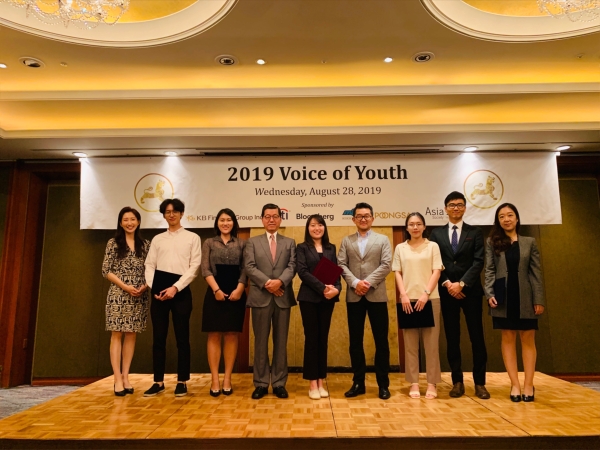 Asia Society Korea held its second annual "Voice of Youth" – Research Presentations on Wednesday, August 28, 2019. Earlier this year, many applicants submitted their preliminary research plan. Five finalists were ultimately chosen and developed their work over the past six months.

Four distinguished judges were in attendance:

Kim Young Joon, Chairman of the Board of Directors of Asian University for Women Support Foundation

The presenters from a number of top universities in Korea covered a diverse range of topics.

Wonguk Cho from Soongsil University began the session with a talk on the needs of university English-medium Major courses in Korean undergraduate institutions from the students’ perspective. Cho brought the the limitation of the current measures to the surface, which aimed on the quantitative expansion of EMI courses on improving knowledge or language proficiency acquisition amongst students.

Seulki Hong, a Ph.D. student from Seoul National University, preceded with the second presentation on a comparative study covering CSR (corporate social responsibility), in UK, US, and Korean industries. She explained the characteristics and the growing significance of CSR projects with specific examples of each major corporation’s practices from the three countries.

Next up to the podium was Seohee Lee from Graduate School of Public Administration, Seoul National University, with her research on the effects of gentrification on resident wellbeing. The overarching intention of her research was to devise an objective, date-driven index that represents the relationship between gentrification and local residents’ wellbeing. Lee underlined how the primary findings of the study indicated that increased gentrification in the neighborhoods of Seoul created a negative effect on the residents’ wellbeing, and further pointed out that the rise and instability of housing markets triggered by gentrification as the main threat against the quality of life of residents.

The fourth speaker, Jiyeon Jeon presented her research on the factors impacting refugee resettlement policies in Korea. Jeon, an Ewha Womans University Graduate School student, observed that the refugee issue in Korea sparked by the 2018 Yemeni refugee crisis, has been heavily securitized by multiple domestic-level actors, preventing appropriate legislation and policies from being made. As refugee issues are becoming more relevant in the peninsula, Jeon made recommendations for the foundation of firm consensus between the government and our society to shield societal issues from irrational securitization and irrelevant politicization.

The final presenter, Jihyeon Bae from Kyunghee University, then delivered her research on the effects of Chinese economic aid on Asian democracy. Her paper provides evidence that Chinese economic support creates negative impacts on the democratic status of Asian countries. It also suggests that Chinese financial support diminishes the cost of authoritarian ruling, thus indirectly encouraging blatant authoritarian governance. Bae specifically examined the case of Cambodia and the Philippines to explain the negative correlation between Chinese capital and democratic performance in these countries.

Each presentation and research report were assessed and graded in terms of their knowledge, planning, strategy and applicability, delivery, and sustainability. Overall, all five participants performed exceptionally well with concrete and informative research, receiving a certificate and cash prize as a token of appreciation.