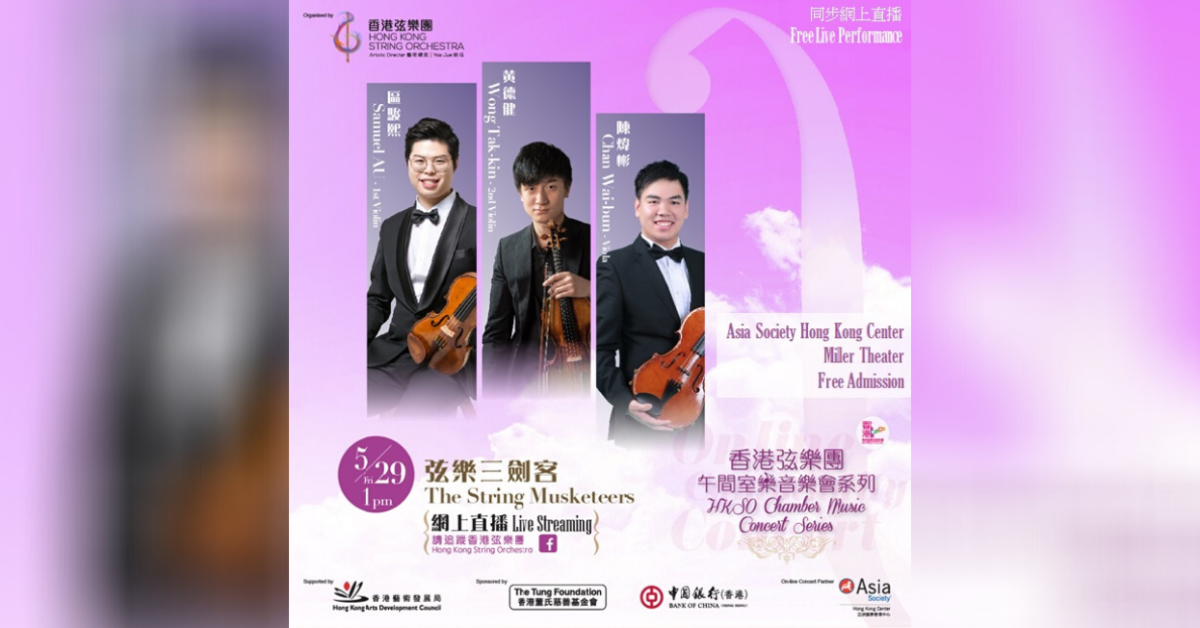 A new selection for three Bs composers from three different musical periods – Beethoven from Classical Period, Bériot and Borodin from the Romantic Period. All these composers excelled in both performing and composing, giving a significant influence to classical music. In this lunchtime concert, you can enjoy various combinations of string ensemble: duos, trio and quartet! Let’s enjoy an inspirational lunchtime concert with our young musicians!

Samuel Au graduated with a Bachelor’s degree with first class honours under the tutelage of Nathaniel Vallois and further studied at the Royal Academy of Music, London, under the renowned violinist Maurice Hasson. He accomplished Master’s degree in Violin Performance with Academy’s highest performing award, the DipRAM. In Vienna, he achieved post-graduate diploma in Universitat fur Musik und darstellende Kunst Wien with Anton Sorokow, Concertmaster of Wiener Symphoniker.

Benjamin Wong graduated with honours from the Yong Siew Toh Conservatory of Music of National University of Singapore where he studied under Associate Prof. Zhang Manchin, Principal Violist of the Singapore Symphony Orchestra, after being awarded full scholarships. Benjamin has taken masterclasses with many international artists such as Paul Silverthorne, Yizhak Schotten and David Erlich. As a chamber musician, he was finalist in the Asia Pacific Chamber Music Competition and has participated in chamber music festivals in France and the Czech Republic.

Pun Chak Yin received his Bachelor of Music degree from The Hong Kong Academy for Performing Arts in 2015, under the tutelage of cellist Karey Ho. A recipient of the Mary Stuart Harding Entrance Award, he completed his Master of Arts degree in cello performance at Royal Academy of Music in 2017, where he studied with David Strange. Chak Yin attended masterclasses with cellists including Li Jiwu, Bion Tsang, Zhu Yibing, Jens Peter Maintz and Colin Carr, and performed in music festivals and projects such as Musicus Festival and the Modern Academy 2015.