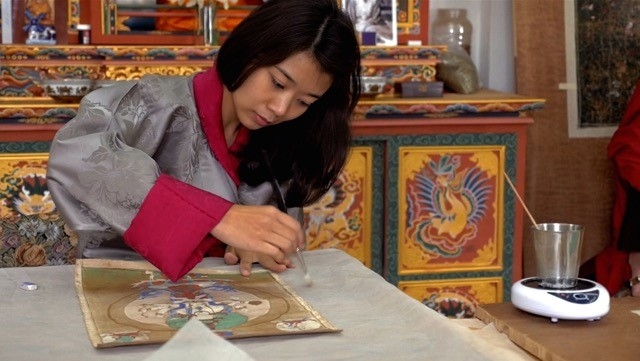 Bhutan plays a unique role in the world because of its cultural and spiritual heritage. In this lecture, Princess Ashi Kesang Choden T. Wangchuk, a member of the Bhutanese Royal Family, will give an introduction to the history of Bhutan, the influence of Vajrayana Buddhism, and its role in altering the daily life of the Bhutanese. As the Executive Director of Bhutan’s Thangka Conservation Centre (TCC), Ashi Kesang will also reveal the conservation efforts made by the TCC. Pictures of restoration work that has never been seen by the public as well as one rare 14th Century thangka of a vision of famous Buddhist saint Terton Pema Lingpa will be shown. Ashi Kesang will also look to the future efforts of the TCC and discuss what the conservation will focus on and how their people can continue to conserve a living culture in the Kingdom of Bhutan and the Himalayan region.

Monks who have travelled from Bhutan will spend the week leading up to the lecture to create a Sand Mandala which will be used in a ritual of consecration, led by Lopen Pem Gyeltshen, who is one of the top 3 members of the Central Monastic Body of Bhutan, before the lecture by Princess Ashi Kesang Choden T. Wangchuk.

Princess Ashi Kesang Choden T. Wangchuk is a member of the Bhutanese Royal Family, Executive Director of Bhutan’s Thangka Conservation Centre (TCC), and an Ancient Buddhist Scriptural Text and Iconographic Scholar. She is the niece of His Majesty, the 4th King of Bhutan and 1st cousin to His Majesty, the present 5th King of Bhutan. She was home schooled during her primary school years by His Holiness Dilgo Khyentse Rinpoche (1910-1991) (Rime Master of the Nyingma Lineage) as her family wanted her to learn as much as possible about Buddhism, the Bhutanese culture, and spirituality. She then spent time in a Bhutanese public school before going to Thailand’s premier British International School, and finally went to Australia where she met her husband and graduated from the University of Canberra with a business degree.

Ashi Kesang Choden T. Wangchuk is the namesake of her grandmother, Her Majesty the Royal Grandmother Kesang Choeden Wangchuck who personally cares for the daily lives of 500 monks (education, food and living) with her own personal finances. Her Majesty the Royal Grandmother Kesang Choeden Wangchuck has been responsible for countless restoration and preservation works of monasteries, and dzongs as well as for individual monks and nuns in the Bhutanese Kingdom. It is Ashi Kesang Choden T. Wangchuk’s strong sense of family duty and personal goal to promote and preserve the Kingdom of Bhutan’s cultural heritage. Ashi Kesang Choden T. Wangchuk is a renowned scholar and has written three books on Bhutan, and published numerous articles. She volunteers for local charitable and spiritual causes with her family. She is also the mother of three children.