In Partnership with Hinrich Foundation 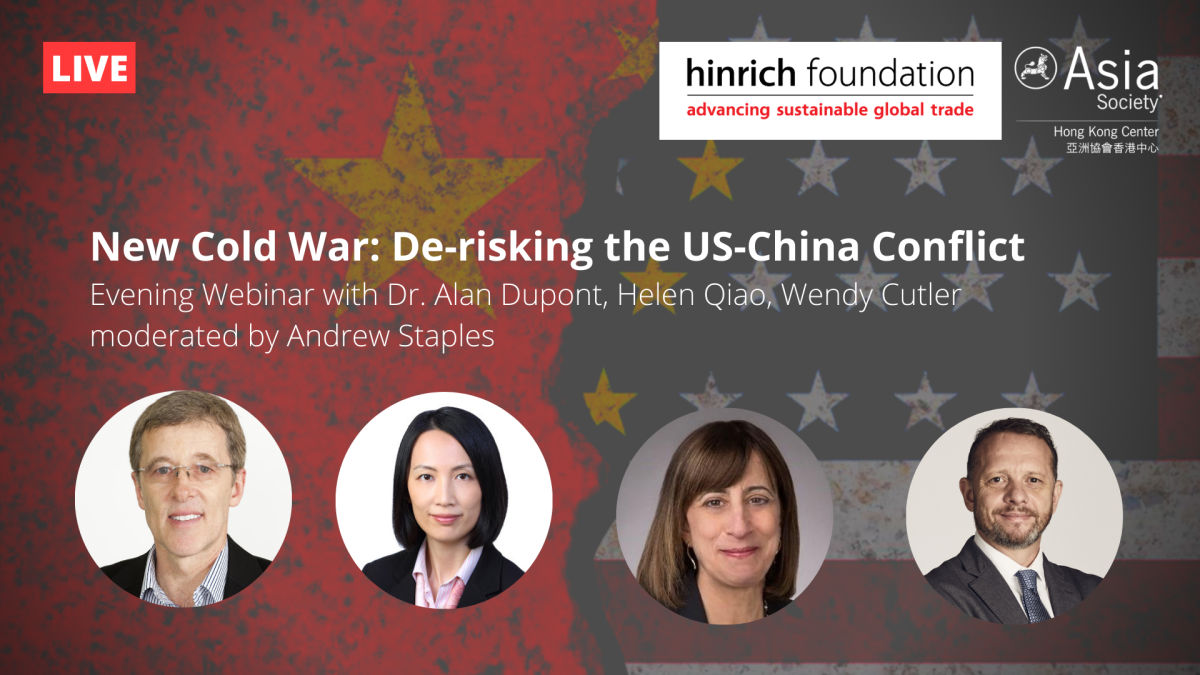 Tune in Wednesday, September 16 at 8:00 p.m. Hong Kong Time, for a free webinar of this event.

Relations between China and the U.S. have deteriorated to such an extent that the situation has been described as a new Cold War. Tensions between the two states over trade, technology and geopolitical intent have been exacerbated by the coronavirus pandemic, fuelling protectionist and nationalist sentiment. A key concern is that this new Cold War turns into a hot war. How then to de-risk the situation? What steps would lead to a de-escalation of tensions and confidence building measures? Join us as we invite our distinguished experts to explore this theme and share their analysis of how to de-risk the U.S.-China conflict. Join Asia Society Hong Kong Center and Hinrich Foundation’s online webcast as Alan Dupont, CEO of Cognoscenti Group, Hinrich Foundation Fellow; Helen Qiao, Chief Economist, China, Bank of America Merrill Lynch; and Wendy Cutler, Vice President and Managing Director of Asia Society Policy; Institute join moderator Andrew Staples, Director of Research and Outreach, Hinrich Foundation.

Wendy Cutler joined the Asia Society Policy Institute (ASPI) as vice president in November 2015. She also serves as the managing director of the Washington D.C. Office. In these roles, she focuses on building ASPI’s presence in Washington —strengthening its outreach as a think/do tank —and on leading initiatives that address challenges related to trade and investment, as well as women’s empowerment in Asia. She joined ASPI following an illustrious career of nearly three decades as a diplomat and negotiator in the Office of the U.S. Trade Representative (USTR). Most recently she served as Acting Deputy U.S. Trade Representative, working on a range of U.S. trade negotiations and initiatives in the Asia-Pacific region. In that capacity she was responsible for the Trans-Pacific Partnership (TPP) agreement, including the bilateral negotiations with Japan. She also was the chief negotiator to the U.S.-Korea (Korus) Free Trade Agreement. Cutler received her master’s degree from Georgetown University’s School of Foreign Service and her bachelor’s degree from the George Washington University.

Dr. Alan Dupont is one of Australia's best-known strategists, Asianists and thought leaders on geopolitical risk, foreign policy, defense and national security. Dr. Dupont AO is CEO of the geopolitical risk consultancy the Cognoscenti Group. He has received commendations for his work from the governments of Japan and East Timor and was named by the Australian Financial Review as one of Australia’s top strategists. He was appointed as an Officer in the Order of Australia for “distinguished service to the international community through security analysis and strategic policy development”, the inaugural holder of the Michael Hintze Chair in International Security at the University of Sydney, CEO of the US Studies Centre and, most recently, Professor of International Security at the University of NSW. He is Contributing National Security Editor for The Australian newspaper and frequently comments on defense and security issues for the media including the ABC, SBS, Sky, CNN, CNBC Asia, the BBC, Voice of America and Reuters. Alan holds a PhD in international relations from the Australian National University and is a graduate of the Royal Military College Duntroon and the US Foreign Service Institute.

Helen Qiao is a managing director and chief economist for Greater China and head of Asia Economics Research, based in Hong Kong. Prior to that, Qiao spent more than six years at Goldman Sachs as senior China economist and four years at Morgan Stanley as chief Greater China economist. Previously, she worked at the World Bank Group (International Bank for Reconstruction and Development) in Washington DC and Lehman Brothers in Tokyo. Qiao has written a wide range of thematic research papers on China. Her work has been published in media and in academic journals, such as The Journal of Policy Modeling. Her team has been ranked top-three in the Institutional Investor All Asia research team surveys in 2013-18 consecutively and No. 1 in Asia economic research in the Institutional Investor Global Fixed Income survey in 2019. Qiao holds a BA degree in international trade from the Renmin University of China, and master’s degree and a PhD in economics from Stanford University. For more information about any awards cited, visit https://rsch.baml.com/awards.

Andrew (Andy) Staples is the Director of Research and Outreach at the Hinrich Foundation. He brings over 20 years of experience in international trade, business and investment research in Asia, with a focus on Japan, Southeast Asia and the Asia Pacific. Prior to joining the Hinrich Foundation, Dr. Staples was the global Editorial Director of The Economist Corporate Network (ECN), the Economist Intelligence Unit’s briefing and advisory service. He was a frequent commentator on economic, trade and investment issues for media and C-suite forums. Before joining The Economist Group, Dr. Staples pursued an academic career holding both tenured and adjunct posts at leading universities and business schools in Japan and the U.K. Dr. Staples has a PhD in International Political Economy and an MSc in East Asian Business, both from the University of Sheffield, U.K. He was a Ministry of Education research scholar at Hitotsubashi University in Tokyo (2001-2003). Dr. Staples has published extensively on Asian trade, FDI and integration. His major publications include Responses to Regionalism in East Asia: Japanese Production Networks in the Automotive Sector published as part of the Palgrave Macmillan Asian Business Series, chapters in edited volumes including Asian Inward and Outward FDI: New Challenges in the Global Economy and the popular textbook, Asian Business and Management: Theory practice and perspectives, now in its third edition.