Mentorship Hacks: The Do’s and Don’ts of Mentorship with Startup Founders 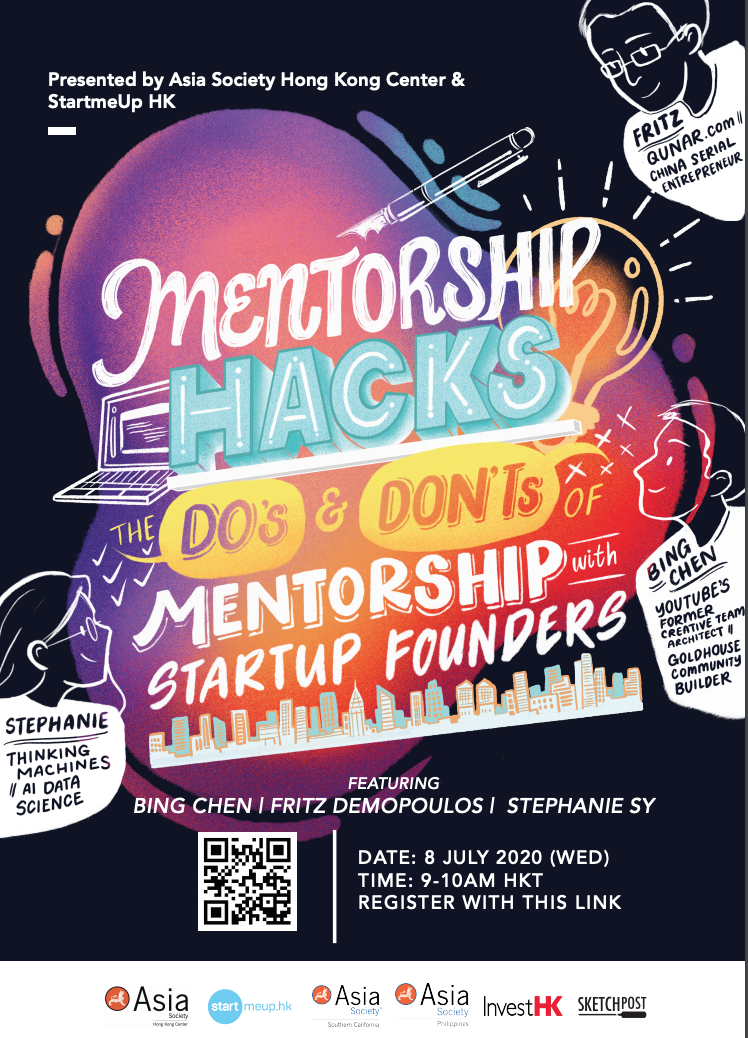 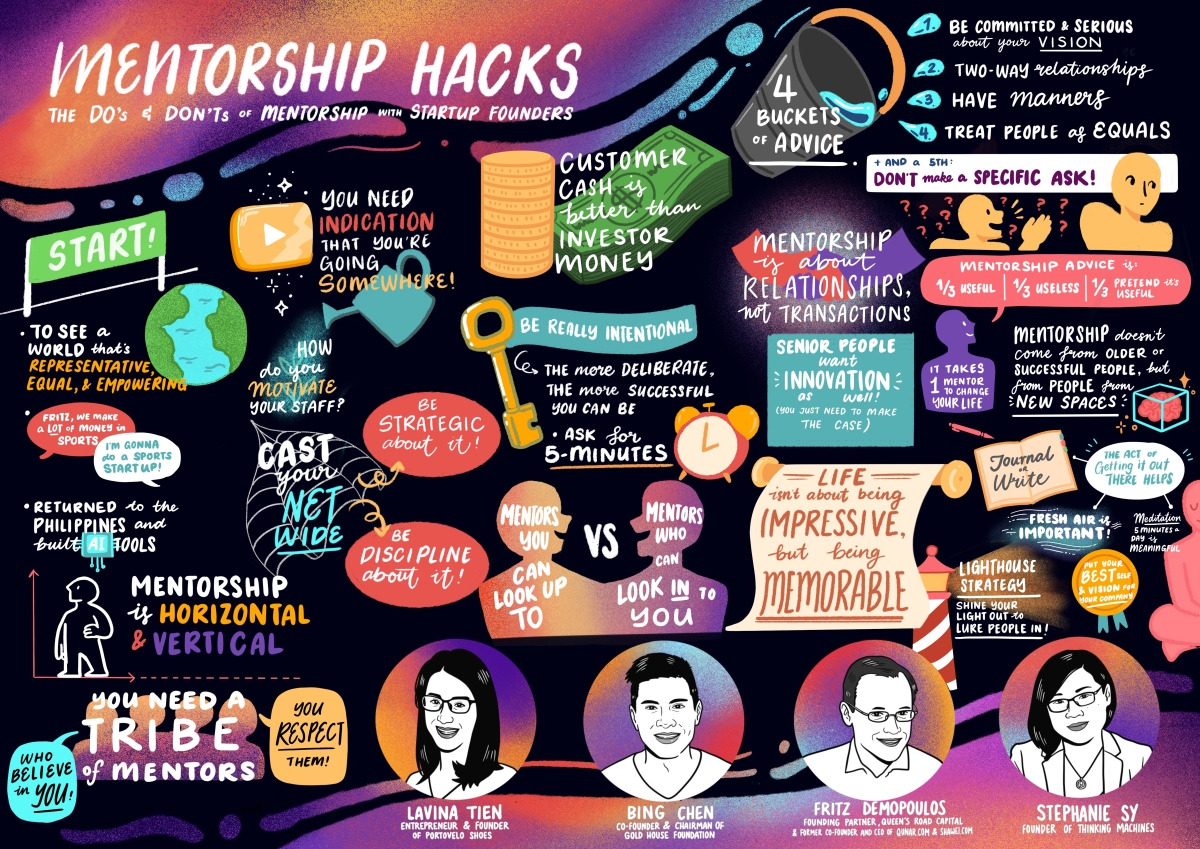 Start-up founders are leading the charge to create an atmosphere of greater collaboration in the midst of unprecedented disruption.  In response to Covid-19, start-up founders are pushing the limits of innovation as society shifts at unprecedented speed to adapt to a new reality.  In the midst of these challenges, mentorship engagement is critical in driving innovation forward. Start-up mentors enable founders to navigate blind spots, leverage the knowledge of experienced veterans, and optimize their start-up’s success prospects.  According to a study by MicroMentor, mentored founders increased their start-up revenue by 83% compared to 16% with non-mentored entrepreneurs. While Hong Kong has world-class research institutes and an increasing number of co-working space and start-up programs, only 15 percent of entrepreneur respondents make use of official R&D support, and 10 percent use mentoring.  What are the do’s and don’ts of mentorship? What makes an ideal mentorship relationship in the start-up stage?  And how does virtual mentor engagement in a Covid-19 context work best? Come hear start-up founders give their hacks about how mentorship can impact your start-up story.

Bing Chen is an entrepreneur, creator, and an equalization builder. He is Chairman and Co-founder of Gold House, the largest collective of pioneering leaders dedicated to forging stronger bonds that enhance Asian representation and success. He is also General Partner and Co-founder of AUM Group, a multicultural film fund; and serves as a Board Director and Advisor to several leading digital media companies including Google's Global Marketing Board, Snap's Yellow Incubator, Omnicom’s Sparks & Honey, Baobab Studios, Oura Health, and more. Previously, he was YouTube's Global Head of Creator Development and Management, where he was one of the original and principal architects of the multi-billion dollar influencer ecosystem that supports 500 million creators worldwide. He is a Forbes 30 Under 30 honoree; a Hollywood Reporter Next Gen Leader; a Hollywood Reporter Most Influential Agent of Change; ADCOLOR Catalyst Award Honoree; Asia Society Asia 21 Young Leader; Magic Johnson's 32 Under 32 Leader; and Asian Chamber of Commerce Entrepreneur of the Year. Bing is a third culture kid across North America and Asia, finally graduating from the University of Pennsylvania. He was born in Knoxville, Tennessee, which becomes obvious at $11.99 buffets.

Fritz Demopoulos has been involved in the Chinese media and internet industries for a number of years. He co-founded Qunar, one of China's largest travel platforms.  Fritz also co-founded Shawei, one of China's largest digital sports media companies.  He is the producer and founder of Melon, Asia's leading science fiction conference.  Previously, Fritz held senior executive positions at Netease and The News Corporation.  He currently coordinates his entrepreneurial business activities through Hong Kong-based Queen's Road Capital. He has invested in a number of startups and works closely with their founders.  Fritz is an active supporter and Global Trustee of the Asia Society.  He is also a Trustee of the SETI Institute and is on the Board of Advisors of UCLA's School of Earth, Planetary and Space Sciences. Fritz is a supporter of the Arsenal Gunners of the English Premier League and the UCLA Bruins. He is a long-term resident of Hong Kong with his lovely wife and two amazing daughters.

Stephanie Sy is the founder and CEO of Thinking Machines. She founded the company in 2015, with the mission of building AI and data systems to help organizations make better decisions. Since its founding, Thinking Machines has grown into a global data science startup with a client list ranging from the biggest corporations in the region to global nonprofits and award-winning media organizations. Sy, as a Gen.T Influencer, has been recognized for her work by the Forbes Asia 30 Under 30 list for enterprise technology, TOWNS Philippines, and Asia 21 Young Leaders. Stephanie graduated from Stanford University in 2011, and got her start as an early employee at Wildfire Interactive, a Silicon Valley startup which was acquired by Google in 2013. In her roles at Wildfire and at Google, she built analytics platforms on some of the largest datasets in the world. Sy continues to advocate for STEM and data science in the country by promoting projects geared towards data science education at the Philippine Department of Science and Technology’s PCIEERD group.

Born and raised in Hong Kong, Lavina Tien has worn multiple hats as founder, entrepreneur and manager. She has over 10 years' experience in the technology space specializing in Growth and Operations, helping launch Asian operations for 3 global tech companies (Google, Airbnb, Student.com). She was most recently General Manager for Entrepreneur First (EF) in Hong Kong a global talent investor that brings together extraordinary founders to build deep-tech startups from scratch. During her tenure at EF, 12 local deep-tech startups were built and funded in 12 months. An entrepreneur herself, Lavina founded her own startup Portovelo Shoes, a social enterprise that aimed to fuel conscious consumption in fashion. Lavina is a graduate of Stanford University and Harvard Business School.

Sketchpost is a group of graphic recording artists, aiming to communicate your message in a vibrant way that sticks. In a time of mass information, we believe that utilising creativity and visuals relevant to your key message makes all the difference in leaving an everlasting impression, relevant to your community.

What is Asia 21 Leaders?
More than a decade ago, Asia Society had a dream: To build a network of young leaders (under the age of 40) across the Asia-Pacific as a way to promote mutual understanding and effective collaboration among the next generation’s most important and influential leaders. A decade later, we have built a movement of nearly 1,000 powerful alumni from more than 40 countries and regions. Today, the Asia 21 Young Leaders Initiative stands as the Asia-Pacific’s foremost young leaders network.