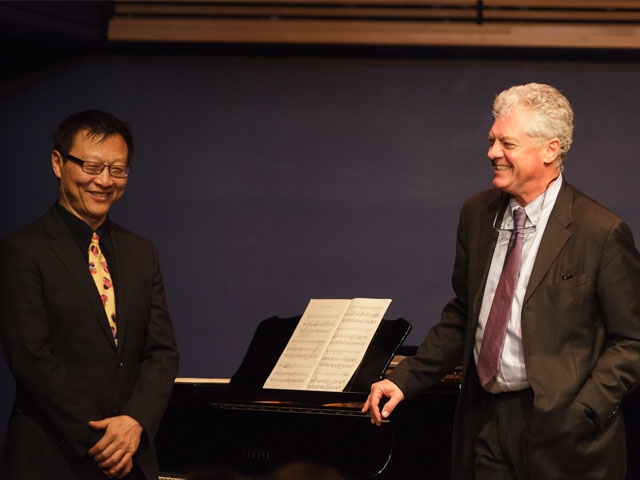 NYFOS Associate Artistic Director Michael Barrett started NYFOS in 1988 with his friend and colleague Steven Blier. In 1992, he co-founded the Moab Music Festival with his wife, violist Leslie Tomkins. From 1994 to 1997, he was the Director of the Tisch Center for the Arts at the 92nd Street Y in New York, and from 2003 to 2012, he was Chief Executive and General Director of the Caramoor Center for Music and the Arts in Katonah, NY. He has distinguished himself as a conductor with major orchestras here and abroad in the symphonic, operatic, and dance repertoire. A protégé of Leonard Bernstein, he began his long association with the renowned conductor and composer as a student in 1982. He served as Maestro Bernstein's assistant conductor from 1985–1990. He currently serves as music advisor to the Leonard Bernstein Estate.

Judith Weir (b. 1954 to Scottish parents in Cambridge, England) studied composition with John Tavener, Robin Holloway and Gunther Schuller. On leaving Cambridge University in 1976 she taught in England and Scotland, and in the mid-1990s became Associate Composer with the City of Birmingham Symphony Orchestra, and Artistic Director of Spitalfields Festival. She was a Visiting Professor at Princeton (2001) Harvard (2004) and Cardiff (2006-13) and in 2014 was appointed Master of the Queen’s Music. In 2015 she became Associate Composer to the BBC Singers. She is the composer of several operas (written for Kent Opera, Scottish Opera, ENO and Bregenz) which have been widely performed. She has written orchestral music for the BBC Symphony, Boston Symphony and Minnesota Orchestras. Much of her music has been recorded, and is available on the NMC, Delphian and Signum labels.

Tenor Jonathan Blalock recently triumphed as Prince Claus in the world premiere of Mark Adamo’s Becoming Santa Claus at The Dallas Opera. His critically acclaimed performance was broadcast to Lincoln Center. Engagements for the 2016-17 season include Don Ramiro (La Cenerentola) with Syracuse Opera, Nanki-Poo with Performance Santa Fe, and Podesta in Mozart’s La Finta Giardiniera with both OnSite Opera and Atlanta Opera. Highly acclaimed for his work in 20th and 21st Century Opera, Jonathan has appeared in a number of world premieres, including Huang Ruo's An American Soldier with Washington National Opera, and The Secret Agent with the Center for Contemporary Opera in NYC; and Paul's Case with Urban Arias, which Alex Ross in The New Yorker declared it as one of the top ten musical events of 2014.

Baritone Tobias Greenhalgh is a versatile singer on the rise, whom Opera News recently claimed was "so clearly headed for success.” He returns the Opera Theatre of Saint Louis in the 2016-17 season as Tom Joad in Gordon’s The Grapes of Wrath. He also sings his first Belcore in L’elisir d’amore with the Orlando Philharmonic, makes this debut at the Staatstheater am Gärtnerplatz with a quartet of roles including the Cold Genius in King Arthur, and reprises Leo Stein and Man Ray in Gordon’s 27 with MasterVoices at the New York City Center. Additionally, he’ll present a recital at the Theatro Sao Pedro in Sao Paolo, Brazil, and joins the Brooklyn Art Song Society for an all-German program.

Coloratura soprano Amy Owens is establishing herself as a versatile performer with comedic flair, a strong aptitude for new music, and a soaring high range. During her two-year residency with Utah Opera, Ms. Owens was praised in Opera News for her “vivacious enthusiasm” and “engaging, bell-like soprano,” gaining particular notice for her performances as Blondchen in Die Entführung aus dem Serail and Papagena in Die Zauberflöte. She recently made her New Mexico Philharmonic debut in Carmina burana and her Reno Philharmonic debut in Christopher Theofanidis's Grammy-nominated choral and orchestral work The Here and Now. She was also seen in workshop performances of Bright Sheng’s new opera Dream of the Red Chamber in New York City and San Francisco with the Shenzhen Symphony Orchestra.

In the 2014-15 season, Mezzo-soprano Katherine Pracht made a role debut as Sharon Falconer in Elmer Gantry with Florentine Opera; another role debut as Ariel in the World Premiere of Joseph Summer’s The Tempest for The Shakespeare Concerts in Boston; followed by covering the role of Baroness “Nica” in Daniel Schnyder’s Charlie Parker’s YARDBIRD commissioned for Opera Philadelphia; and a role debut of Flora Bervoix in Opera Philadelphia’s La Traviata. Upcoming performances include Mezzo solos in Philip Glass' Symphonie No. 5 with the Washington Chorus at Kennedy Center Concert Hall; and the United States premiere of Richard Wernick's ...and a Time for Peace with the American Symphony Orchestra at Carnegie Hall. Ms. Pracht has been a Metropolitan Opera Competition regional finalist in San Antonio, Memphis, and twice in Minneapolis, where, in 2006, she won the Outstanding Mezzo Award.

Isaac Droscha is an operatic Bass-Baritone who has performed numerous roles with various regional companies in the United States. He has most recently performed as Escamillio in Musica Viva’s production of The Story of Carmen in Hong Kong and as Leporello in a production of Don Giovanni at the Estates Theater in Prague. He is also a prolific concert performer of oratorio and art song and performs recitals regularly in the United States, Russia, and Hong Kong, and is a frequent collaborator with Hong Kong Musica Viva. Isaac is currently a lecturer in the Humanities division of the Hong Kong University of Science and Technology.

Amy Sze received her bachelor's degree from The Hong Kong Academy for Performing Arts with first class honors, and holds a Doctor of Musical Arts degree in Piano Performance and Literature from the Eastman School of Music. Winner of the Eastman Concerto Competition and finalist of the MTNA Steinway Competition, Sze has performed as a soloist with many orchestras including Texas Fort Worth Chamber Orchestra, Eastman Symphony Orchestra, Hong Kong Sinfonietta and Hong Kong Philharmonic Orchestra. She appears frequently on RTHK Radio 4 in recitals and has been featured in such festivals as Le French May and ISCM World Music Days. Amy Sze is currently on the faculty of The Hong Kong Academy for Performing Arts and the Baptist University of Hong Kong.

Described as “intricate” and “captivating,” the music of Juhi Bansal takes its inspiration from extramusical origins: photography and images from nature, poetry, or prose. As an Indian composer brought up in Hong Kong, her writing draws subtly on those traditions, entwining them closely and intricately with the gestures of classical music. Her works have received numerous national awards, including the Five Colleges New Music Festival Competition, ASCAP Lotte Lehman Foundation Art song Competition, Boston Metro Opera International Composers Competition, and multiple ASCAP Morton Gould Young Composer awards. Recent commissions include Begin, for the LA Philharmonic Association and 21C Liederabend; Where Shadow Chases Light, commissioned by the Oakland East Bay Symphony; and Land of Waking Dreams, commissioned by Piano Spheres.

Denise Mei Yan Hofmann was born in Hong Kong. Denise’s music has been played at the National Opera Center, DiMenna Center for Classical Music, Spectrum and Mannes College of Music in NYC; the Yong Siew Toh Conservatory in Singapore; HellHOT!, a Hong Kong New Music Festival; the International Dance Festival in Bangkok, Thailand. She has written incidental music for three theatre productions including NYC production Harriman-Baines at Theater for the New City. Denise was commissioned by the Hong Kong Composer’s Guild to compose a trio for SOUND-IMAGination: Hong Kong Postcards in 2014. In 2016, Denise was awarded residency at Brush Creek Foundation for the Arts and the Mannes College Dean’s Award.

Galison Lau is one of the most active composers in his generation in Hong Kong. Galison has been commissioned by Hong Kong Arts Festival 2014; Spotlight On Young Musicians Concert Series 1 in June 2011; Musicarama 2010, and 2012 by Hong Kong Composers’ Guild. In 2009, Scents, for string quartet, was chosen as first prize of Harry Archer Memorial Scholarship. His music has been performed or read by Munich Chamber Orchestra; Parker Quartet; MIVOS Quartet; RTHK Quartet; Varshavsky Shapira Piano Duo; and the Hong Kong New Music Ensemble.

Daniel Sabzghabaei is an internationally performed and award-winning composer whose works have been presented by Voices of Change, the Kharkov Academic Youth Orchestra, the Ansan City Choir, Pittsburgh-based OvreArts, and the ICon Arts Percussion Group. Daniel has been increasingly interested in his Persian heritage, seriously studying Persian art, music, and poetry. He is currently a graduate student at The Peabody Conservatory of The Johns Hopkins University studying with Pulitzer Prize-winning composer Kevin Puts. Recent and upcoming engagements include: the premier of Delbaré by Minnesota-based choral ensemble Magpies and Ravens, an internship at the 2016 Ojai Summer Music Festival, and performances at the Oregon Bach Festival Composers Symposium with James MacMillan.