The Gifts of Reading | Asia Society Skip to main content

The Gifts of Reading 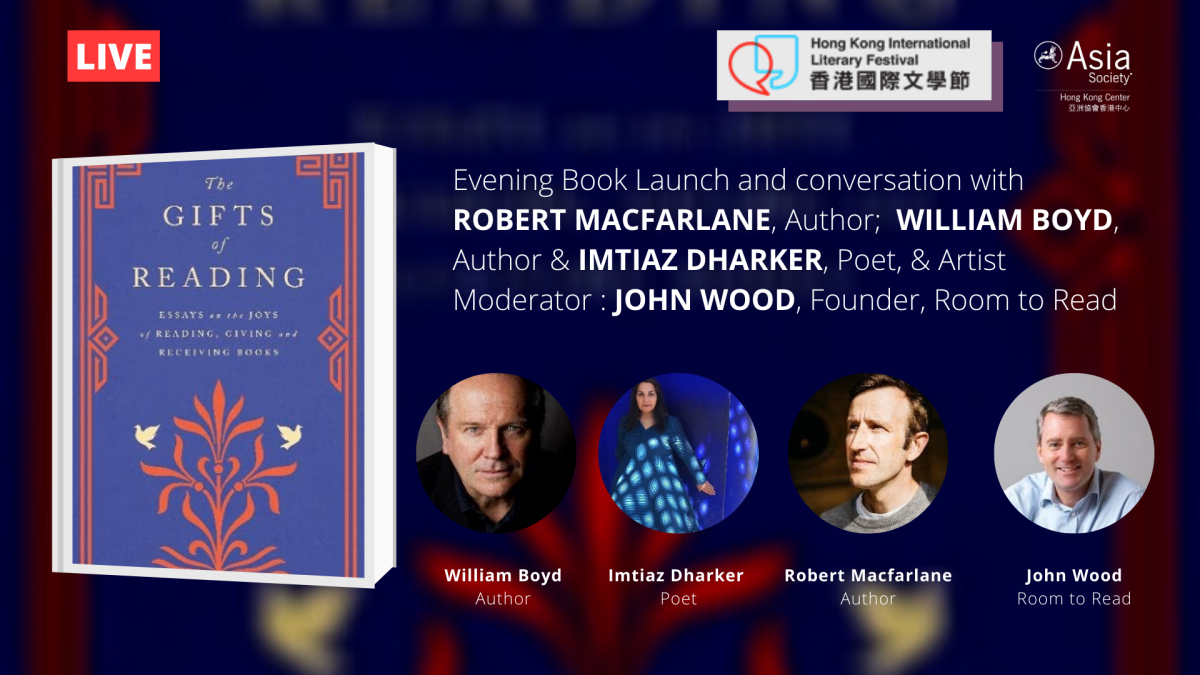 Published to coincide with the 20th anniversary of global literacy non-profit, Room to Read, The Gifts of Reading is an anthology of essays by some of the world’s most beloved novelists, non-fiction writers, essayists and poets.

William Boyd was born in 1952 in Accra, Ghana, and grew up there and in Nigeria. He is the author of sixteen highly acclaimed bestselling novels and five collections of stories, the most recent novel being Trio, released in October. He is married and divides his time between London and south-west France.

Imtiaz Dharker is a poet, artist and video film-maker, awarded the Queen’s Gold Medal for Poetry in 2014. Her six collections, all published by Bloodaxe Books, include Over the Moon and the latest, Luck is the Hook. Her poems have featured widely on BBC radio, television, the London Underground and Mumbai buses. She has had eleven solo exhibitions of drawings and also scripts and directs video films, many of them for non-government organizations working in the area of shelter, education and health for women and children in India.

Robert Macfarlane’s prize-winning and bestselling books about landscape, nature, memory and travel include Mountains of the Mind: A History of a Fascination, The Wild Places, The Old Ways, Holloway (with Stanley Donwood and Dan Richards), Landmarks and – most recently – Underland: A Deep Time Journey. His work has been translated into many languages and widely adapted for screen, stage and musical performance. Copies of his collaboration with artist and author Jackie Morris, The Lost Words: A Spell Book, are used in thousands of schools across Britain. The Lost Spells is released in October.

Jennie Orchard has been involved with the world of writers, books and publishing for 40 years, initially in London, later in Australia and Asia. Since 2002 she has been actively engaged in the non-profit sector, with a small portfolio of commitments but a particular focus on Room to Read. 2008 – 2012 she led the team which established Room to Read’s fundraising presence in Australia.

Jancis Robinson is one of the world’s top international wine authorities – and she loves and lives for wine in all its glorious diversity. She writes daily for JancisRobinson.com and weekly for the Financial Times. She is founder-editor of The Oxford Companion to Wine, co-author with Hugh Johnson of The World Atlas of Wine and co-author of Wine Grapes, each of these books recognized as a standard reference worldwide. Jancis has been a committed and generous Room to Read ambassador for almost two decades, appearing at gala wine events all over the world. Wine has played a significant part in generating many millions.

John Wood is the Founder of Room to Read, one of the fastest-growing social enterprises in world history that has brought the lifelong gift of education to nearly twenty million children in sixteen countries across the developing world. John has published five books, including the bestselling Leaving Microsoft to Change the World, which was chosen by Amazon as one of the Top Ten Business Books of 2006, and Purpose, Incorporated. Goldman Sachs named him one of the World’s 100 Most Intriguing Entrepreneurs and he was awarded Microsoft’s Alumnus of the Year by Bill and Melinda Gates. (Moderator)