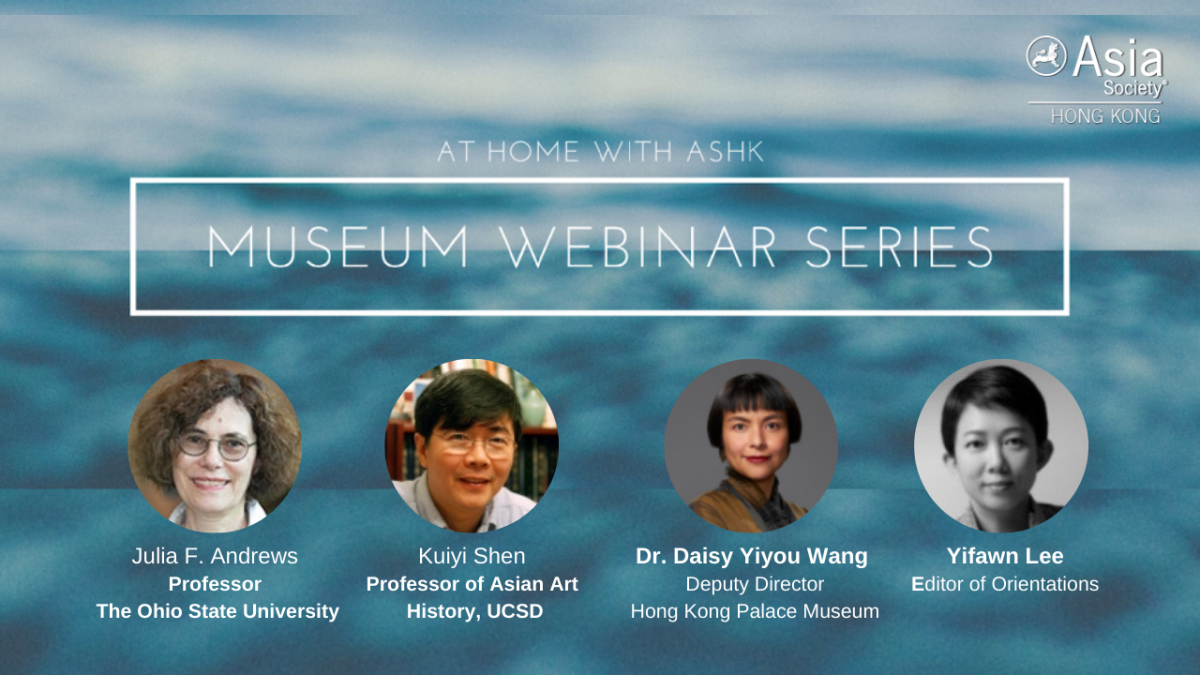 Art History is an expansive topic. Narrow that down to Asian Art history and you’ve still barely made a dent in the enormous library of artists, art movements and artistic styles that have come into being in the past 100 years, let alone the last five centuries. So in order to take this information and make it palatable, curators and professors alike will construct an imagined past that fits into contemporary society and allows this history to become more accessible. In this 6th episode of the Museum Webinar Series, our three distinguished speakers, Julia F. Andrews, Kuiyi Shen and Dr. Daisy Yiyou Wang will share their way of exploring the inherited tradition on Chinese modern art and how they make these relevant to the present with the imagination of the past.

Julia F. Andrews is a distinguished university professor in the Department of History of Art at The Ohio State University and the recent recipient of a Fulbright Fellowship. Her 1994 publication, Painters and Politics in the People's Republic of China,1949-1979 won the Joseph Levenson Prize of the Association for Asian Studies as the best book of the year on modern China. Her recent projects include Blooming in the Shadows: Unofficial Chinese Art, 1974-1985 (China Institute, 2011, New York), Light Before Dawn (Asia Society, Hong Kong Center, 2013), and Art of Modern China (with Kuiyi Shen, University of California Press, 2012), which was awarded the 2013 Humanities Book Prize of the International Convention of Asia Scholars. She was a 2016 Guggenheim Fellow.

Dr. Daisy Yiyou Wang is the Deputy Director, Curatorial and Programming Hong Kong Palace Museum. She is responsible for the museum’s exhibition, research, collection, publication, learning and public engagement programmes. She has served as the Robert N. Shapiro Curator of Chinese and East Asian Art at the Peabody Essex Museum and the Chinese Art Specialist at the Smithsonian’s Freer|Sackler. With Jan Stuart, Wang co-curated the groundbreaking exhibition ‘Empresses of China’s Forbidden City’ and co-edited the publication, which was merited with the Smithsonian Secretary’s Research Prize in 2019. This exhibition was named one of ‘the Top 20 United States Art Exhibitions’ in 2019 by the Hyperallergic. A specialist of the history of collecting, lacquer and Qing imperial portraiture, Dr. Wang has published internationally. Dr. Wang is a recipient of a Getty Museum Leadership Fellowship, a Smithsonian Post- Doctoral Fellowship and a National Endowment for the Humanities grant.

Yifawn Lee is the publisher and editor of Orientations, a scholarly magazine for collectors and connoisseurs of East and Southeast Asia, the Himalayas and South Asia founded in 1969. After finishing her studies, she worked in finance and later joined Orientations in 2008. In 2014, she founded Asian Art Hong Kong as a platform to provide art-related lectures and events. In 2018, she helped organize ‘The Blue Road: Mastercrafts from Persia’ at Liang Yi Museum and ‘From Two Arises Three: The Collaborative Works of Arnold Chang and Michael Cherney’ at The University Museum and Art Gallery of the University of Hong Kong. She currently sits on the advisory board of Liang Yi Museum and on the executive committee of the Friends of Hong Kong Museum of Art.

Online
Mon 02 Nov 2020
9 - 10 a.m.
Hong Kong Time
Calculate your local time »
20201102T090000 20201102T100000 Asia/Hong_Kong Asia Society: Distilling Asian Art History Art History is an expansive topic. Narrow that down to Asian Art history and you’ve still barely made a dent in the enormous library of artists, art movements and artistic styles that have come into being in the past 100 years