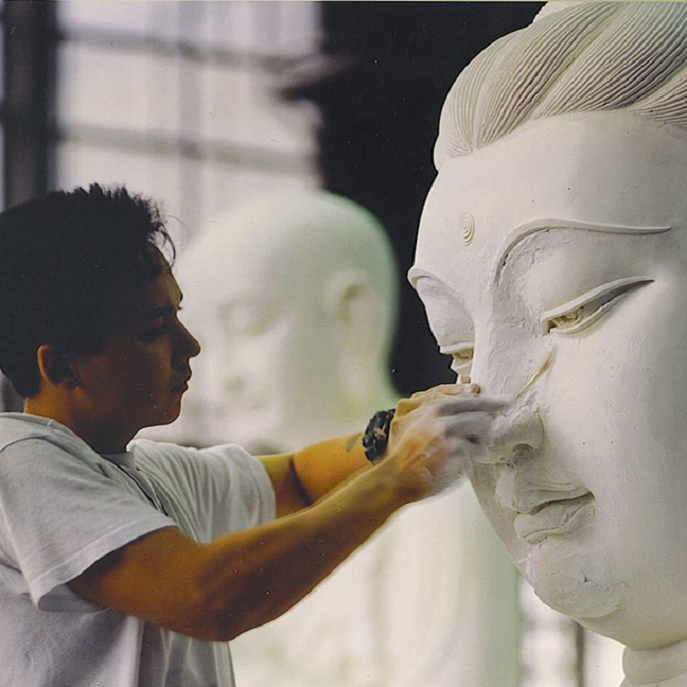 Derek Bailey, a Buddhist sculptor who walked a fine line between tradition and rebellion, described himself as a Hong Kong artist for good reason: most of his major works were created for some of the city’s most important Buddhist sites. He was involved in the final phase of the Tian Tan Buddha’s construction on Lantau Island, one of the largest outdoor-seated bronze Buddha in the world, for which Bailey created the 88 wood burned panels that are on permanent exhibition around the central interior hall upon which the Buddha is seated. Bailey also designed and constructed the statues that populate the nunnery in Diamond Hill and also designed the prototype for the 76-metre bronze statue of Kwan Yin that crowns the Tsz Shan Monastery complex in Tai Po — one of the tallest sculptures of its kind.

Beyond Hong Kong, Bailey also completed the 1000-armed Kwan Yin at the Foo Hai Ch’an Monastery in Singapore. Bailey describes this astonishing bronze sculpture, which was created using a traditional casting process, as his most complex undertaking.

During this evening presentation, a history of the late Derek Bailey’s artistic and creative practice will be introduced by his sister Stephanie Bailey.

Stephanie Bailey is editor-in-chief of Ocula Magazine, a contributing editor to ART PAPERS and LEAP, and the current curator of Conversations at Art Basel Hong Kong. A member of the Naked Punch editorial committee, she also writes for Artforum International, Yishu Journal of Contemporary Chinese Art, and D’ivan, A Journal of Accounts. Between 2012 and 2017, she was managing editor and senior editor of Ibraaz.