Dana is also a prolific composer and arranger, having recently written and premiered Bound(less), a new work commissioned by the vertical dance company Project Bandaloop and the Orange County Performing Arts Center, as well as an evening length work, Life After Dark, commissioned by the Apollo Theater in New York City. He was a featured guest music director and performer in Fela! on Broadway in 2010 and is the first ever Composer-In-Residence for The Museum of Chinese in America in New York City. In November, Dana will premiere a new work entitled The Sounds of Folk Tales in collaboration with Dave Liang of Shanghai Restoration Project at the Hong Kong New Vision Arts Festival. Dana grew up in San Francisco and studied classical cello and jazz trombone on double scholarships at Manhattan School of Music. He gives clinics and workshops around the globe as an official performing artist and clinician for YAMAHA and D'Addario Bowed Strings. 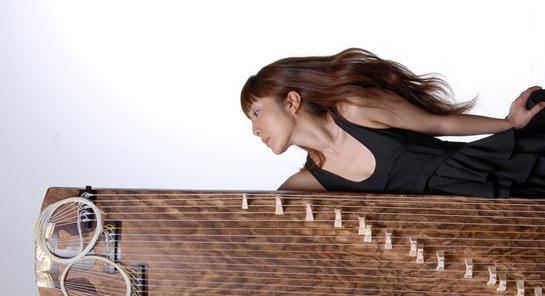 Yumi Kurosawa (Koto/Composer/Computer Sound) was born and raised in Japan. She began studying koto when she was three. Yumi received first prize at National Competition for students in 1989 and 1992 and Scholarship from The Agency for Cultural Affairs of Japan in 1998. Yumi played at the Prague Cello Ensemble Concert at Suntory Hall, Tokyo in 1996. In2002, she moved to New York, and held a concert at Weill Recital Hall at Carnegie. Continuing to play in Japan, she premiered Koto Concerto Genji (composed by Daron Hagen) as a soloist with the Orchestra of the Swan in the UK in 2011.Her first original CD, Beginning of a Journey, featuring her own compositions, was released in 2009. Yumi studied computer music at Keio University, and has received great concert reviews in New York Times andThe Washington Post.