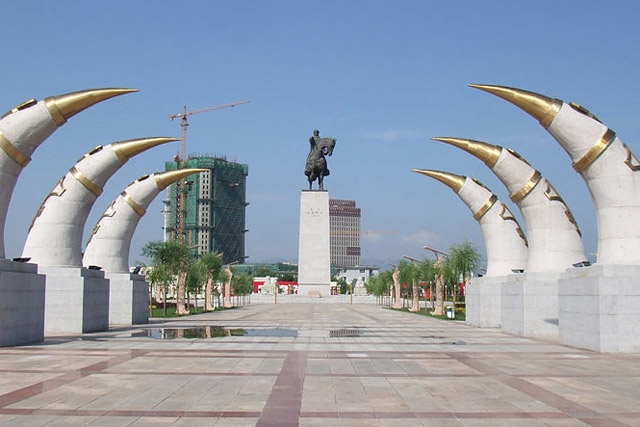 Genghis Khan moved his troops into the quasi-Chinese Chin-ruled north China in 1211, and in 1215 they destroyed the capital city. Hisson Ogodei conquered all of North China by 1234 and ruled it from 1229 to 1241. Genghis Khan's grandson, Kublai Khan, defeated the Chinese Southern Song in 1279, and for the first time all of China was under foreign rule.

In 1271 Kublai Khan named his dynasty Yuan which means "origin of the universe." The Yuan dynasty in China lasted from 1279 to 1368. Kublai Khan followed a tentative policy of Sinicization, that is, he adapted to the Chinese way of governing and when you look at his portrait, he looks very much like other Chinese rulers. On the other hand, although he used some Chinese in low positions in the government, he abolished the civil service exams, preferred to use Chinese in his bureaucracy and established separate rules for the Mongols and for the Chinese. His capital, present-day Beijing, became a cosmopolitan and wealthy city.

Kublai Khan made a census of the population, dividing the people intofour categories: Mongols; Miscellaneous aliens (which included West Asian Muslims who performed important services for the Mongols); North Chinese called Han people, those who had been under the Chin state and their descendants, including Chinese, Jurchen, Khitans and Loreans; and finally Southern Chinese, subjects of the Southern Sung, whom the Mongols considered the least trustworthy. The Mongols could not have ruled China without the help of some of the Chinese elite and yet they were reluctant to use the Chinese, particular the Southern Song, in their government. Although Genghis Khan used some Chinese in lower positions in his government, he abolished the civil service exams, kept separate laws for Mongols and for the Chinese, and preferred to employ foreigners rather than Chinese in his bureaucracy as he thought they would be more trustworthy than the Chinese.

Kublai Khan wanted to support agriculture and he created an Office for Stimulation of Agriculture. Although many of his people wanted to establish the herding way of life inside the wall, in 1262 he passed an edict prohibiting the nomads' animals from roaming on farm land. He filled grain storage areas in case of future famines, especially in the north where lands had been damaged by constant fighting. The capital had 58 granaries which stored 145,000 shih (one shih = 133 lbs). Marco Polo said he fed 30,000 poor people every day in the capital. He organized the farmers into groups called she. Each she was composed of 50 families. They were encourage to do self-help projects like planting trees, working on irrigation and flood control, stocking rivers andlakes with fish, and promoting silk production. They were to monitortheir own members and reward those who worked well and punish those whowere lazy. The she also helped the censor watch over the people. It promoted education in better agricultural techniques and basicliteracy.

Kublai Khan organized a fixed, regular tax system. The people did no tpay their taxes to the local collectors but made just one payment to the central government. The government then paid the nobles. He demanded a great deal of corvee, especially to work on the extensions of the Grand Canal, to link the Yangtze River with his capital in order to get enough grain to the capital, on the postal system, and on construction of palaces and temples. He not only demanded people provide labor but also horses and supplies. At the same time he issued edicts demanding overseers not to be oppressive. He did not use corvee to get farmers off their land so it could become grazing land.

Both overland and maritime trade flourished. The Mongols welcomed foreigners who included Russians, Arabs, Jews, Genoese and Venetians. Marco Polo was only one of many traders to receive a warm welcome and to work for the Khan. Mongols themselves were not involved in the caravan trade; they encouraged others. Kublai Khan used caravan merchants to gather intelligence, and he protected and encouraged them. Merchants felt secure and they had relatively high status in Yuan China. Kublai Khan was the first to put in country-wide use of paper currency. Merchants had to convert foreign metals into paper money when they crossed into China. Artisans got grants of food and did not have to do corvee. Marco Polo was very impressed with trade on the Yangtze. The Mongols used the Grand Canal to transport grain to the capital.

Kublai Khan improved the communication system within his empire. At first its main use was for official news, but merchants used the system as well. By the end of Kublai Khan's reign, there were 1,400 postal stations, which used 50,000 horses, 8,400 oxen, 6,700 mules, 4,000 carts, 6,000 boats, 200 dogs and 1,150 sheep. Rest stops had hostels with kitchens, main halls, area for animals and to store grain. Rider-messengers could cover 250 miles a day.

In spite of his policies of toleration and his use of Chinese in the government, Kublai Khan and the Mongols did not want to become Chinese. As much as possible, they kept separate from the Chinese they ruled. They clung to their own values an way of life, celebrating their traditional festivals and enjoying their feasts. The women did not adapt the Chinese custom of foot binding which was just becoming a sign of high status among upper class Chinese. They continued to dress in their own clothing.

Where to put the capital was a major decision for Kublai Khan. Genghis Khan had not been interested in the sedentary way of life. For him, the empire was the saddle of his horse so he avoided what was left of the Chin capital city Chengdu (Beijing). Kublai Khan ended up building two capitals: "Upper Capital", 125 miles from Beijing, called Shangdu, and the "Great Capital", Dadu, slightly northeast of the Chin capital. (This was Coleridge's Xanadu). So as not to lose their nomadic ways, the Mongols kept a large are of steppe grass at the summer palace near the Central Capital. Shangdu, the Upper Capital, with a population was between 100,000 and 200,000, looked like a Chinese capital except for the large hunting preserve and garden it had. As time passed, Shangdu became the retreat where, because of its large hunting area, the Mongols felt closer to their nomadic values. It was a welcomed relief for Kublai Khan who never lost his fascination with the hunt.

By 1279, the high Point of Kublai Khan's rule, he had established himself as an intellectual as well as a warrior. He enjoyed the company of scholars and intellectuals, men of wit. With them he worked out a new script. In his court there was much drama, and Buddhism and Taoism (less anti-foreign than Confucianism) thrived. He saw wisdom in taxing people rather then killing them. He knew the importance of fair laws rather than trying to bribe people, because he realized that there is only enough money to satisfy a few, even with the few, there is no end to their greed, so it is better to have justice. He was tolerant of various religious groups. In order to impress on his fellow Mongols that he was indeed ruler of the world, he encouraged diplomats and traders like Marco Polo from the Far West to kowtow in his presence!

But after 1279, Kublai Khan's rule began to weaken, and his loss of power fits the familiar pattern of the disintegration of an empire. For one thing, in part to demonstrate that he really did rule the world, he launched two very costly and unsuccessful attacks on Japan. He had hoped a victory against Japan would bolster his image as a successful world conqueror, not a Chinese bureaucrat, and give him legitimacy as the Great Khan. The 25,000 men he sent against Japan in 1274 were defeated, in large part, by a typhoon. He tried again in 1281, this time sending 140,000 men, supported by additional Korean troops. As far as the Japanese were concerned, their gods protected them again by sending another divine wind, Kami kazi, which again destroyed the Mongol fleet. The l281 defeat broke his image of invincibility, andwhen he tried to re-establish it by campaigns into Southeast Asia, he failed there as well.

The Japanese offensive proved very costly financially and to pay for it, he over-taxed the people, one of the most critical reasons for a government's demise. The peasants suffered under the burden of increased taxes. There was widespread inflation because the government also printed a great deal of paper money. To offset the inflation, Kublai Khan ordered the currency devaluated 5 to 1. Supporting his northern capital required extending the Grand Canal, and the people resented the corvee demanded of them to build the 135 mile extension, completed in 1289.

Economic problems made Kublai Khan less tolerant. He became increasingly distrustful of the merchants, many of whom were Muslim, and in the late 1270's he began to issue anti-Muslim legislation such as forbidding circumcision or slaughtering animals in the Muslimfashion. This persecution continued until l287. At the same time, he was increasingly supportive of Buddhists which led some of the Buddhist priests to take advantage of their positions.

Although Kublai Khan tried to rule as a sage emperor, the Mongols did not adjust to Chinese ways. Ideologically and culturally the Mongols resisted assimilation and legally tried to stay isolated from the Chinese. They thought Confucianism was anti-foreign, too dense had too many social restrictions. The Chinese intellectuals turned away from Buddhism although many Mongols liked it, so Buddhism did not bring them closer to the Chinese, either. Towards the end, Kublai Klan reinstituted the exam and let Chinese serve in lower level government position, perhaps to try and make the people happier, but the Mongols were always foreigners in Chinese eyes.

The Mongol rule became increasingly less stable after 1294 when Kublai Khan died and succession became a problem. In the period between 1308-1333 there were eight emperors; two were assassinated and all died young. Without an accepted rule of succession, the death of an emperor caused violent conflict among the different would-be rulers. At the very time when the empire needed strong central control to stay in power, the Mongols wasted their efforts battling over succession. Another familiar reason for the demise of an empire was the rise of local landlords. When the military leaders no longer had a central figure to whom to give their loyalty, they used the troops to farm their land, not to fight, increasing their own power and reducing the morale of the troops. The end of the Yuan rule in China came "by expulsion and not by absorption." For the Chinese, the most important factor was peasant unrest caused by the over-taxation, corvee, unsuccessful military campaigns and insecurity. The Chinese always resented the foreigners and in the end revolted and drove them out. A Chinese orphan Hongwu, a peasant soldier who gave up banditry to become a Buddhist monk, led the revolt and founded the Ming dynasty in 1368.