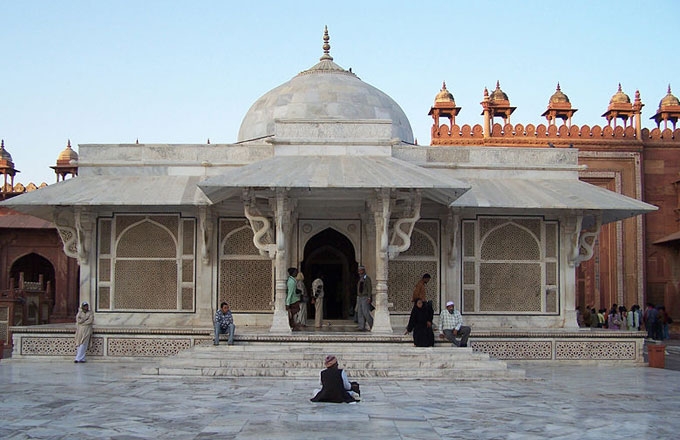 The religious beliefs of people along the Silk Road at the beginning of the 1st century BCE were very different from what they would later become. When China defeated the nomadic Xiongnu confederation and pushed Chinese military control northwest as far as the Tarim Basin (in the 2nd century BCE), Buddhism was known in Central Asia but was not yet widespread in China nor had it reached elsewhere in East Asia. Christianity was still more than a century in the future. Daoism, in the strict sense of that term, connoting an organized religion with an ordained clergy and an established body of doctrine, would not appear in China for another three centuries. Islam would be more than seven centuries in the future.

The peoples of the Silk Road in its early decades followed many different religions. In the Middle East, many people worshiped the gods and goddesses of the Greco-Roman pagan pantheon. Others were followers of the old religion of Egypt, especially the cult of Isis and Osiris. Jewish merchants and other settlers had spread beyond the borders of the ancient kingdoms of Israel and Judea and had established their own places of worship in towns and cities throughout the region. Elsewhere in the Middle East, and especially in Persia and Central Asia, many people were adherents of Zoroastrianism, a religion founded by the Persian sage Zoroaster in the 6th century BCE. It posited a struggle between good and evil, light and darkness; its use of fire as the symbol of the purifying power of good was probably borrowed from the Brahmanic religion of ancient India. The Greek colonies of Central Asia that had been left behind after the collapse of the empire of Alexander the Great had, by the 1st century BCE, largely converted from Greco-Roman paganism to Buddhism, a religion that would soon use the Silk Road to spread far and wide. In India, on side routes of the Silk Road that crossed the passes to the Indus Valley and beyond, the older religion of Brahmanism had given way to Hinduism and Buddhism; the former never spread far beyond India and Southeast Asia, while the latter eventually became worldwide in extent.

Coming at last to China on our west-to-east survey of the ancient faith of the Silk Road, we find that rulers worshipped their own ancestors in great ancestral temples; they were joined by commoners in also worshiping deities of the earth, the four directions, mountains and rivers, and many others. There was, as yet, in China no official state cult of Confucius, no Buddhism, and no organized religious Daoism. The beliefs of Korea and Japan at that early period are largely lost in an unrecorded past, but they appear to have been ancestral to the later Japanese religion of Shinto, a polytheistic belief system that emphasizes worship of local gods and goddesses, the importance of ritual purity, and rule by a king of divine descent.

That the religious beliefs of the peoples of the Silk Road change radically from what they had been when trans-Eurasian trade began to take place on a regular basis was largely due to the effects of travel and trade on the Silk Road itself. Over the centuries for two thousand years the Silk Road was a network of roads for the travel and dissemination of religious beliefs across Eurasia. Religious belief is often one of the most important and deeply held aspects of personal identity, and people are reluctant to go where they cannot practice their own faith. Traders who used the Silk Road regularly therefore built shrines and temples of their own faiths wherever they went, in order to maintain their own beliefs and practices of worship while they were far from home. Missionaries of many faiths accompanied caravans on the Silk Road, consciously trying to expand the reach of their own religious persuasion and make converts to their faith.

The dynamics of the spread of beliefs along the Silk Road involves a crucial, though little-remarked, difference between two fundamental types of religions. Generally speaking, religions are either proselytizing or non-proselytizing. That is, they either actively seek to recruit new members to the faith from outside the current membership group, or they do not. In the former case, ethnicity, language, color, and other physical and cultural differences are taken to be of relatively small importance compared with the common humanity of all believers, and the availability of the faith (and its particular canons of belief, forms of worship, and promises of salvation) to all humans everywhere. In the latter case, that is, of non-proselytizing religions, membership in a religion often coincides with membership in an ethnic group, so that religious participation is a birth right and not a matter of conversion; conversion often occurs only when a person marries into the faith, and in extreme cases conversion is rejected as an impossibility. Examples of proselytizing faiths are Zoroastrianism, Manichaeism, Buddhism, Christianity, and Islam; non-proselytizing faiths include Hinduism, Judaism, and Shinto. All of these were religions of the Silk Road; some spread along the trade routes to extend their spheres of faith enormously, while others did not travel from their native lands, or did so only to form enclaves of the faithful in foreign lands.

Buddhism was the first of the great missionary faiths to take advantage of the mobility provided by the Silk Road to extend its reach far beyond its native ground. From its origins in north eastern India, Buddhism had already spread into the lands that are now Pakistan and Afghanistan by the 1st century BCE. Buddhist merchants from those areas built temples and shrines along the Silk Road everywhere they went; the priests and monks who staffed those religious establishments preached to local populations and passing travelers, spreading the faith rapidly. Buddhism’s essential message—that earthly life is impermanent and full of suffering, but that the painful cycle of birth, death, and rebirth can be ended through Buddhist faith and practice—had wide appeal, and its universalism enabled it to cross boundaries of space, language, and ethnicity with ease.

The arrival of Buddhism in China was officially noted by the imperial court in the mid-1st century CE, and the faith spread in China thereafter, helped by both official and private support for the building of temples and monasteries. Buddhist missionaries from Central Asia began an active program of translating sacred texts into Chinese, and a number of Chinese priests and monks, over the centuries, traveled the Silk Road in search of doctrinal instruction in India. Buddhism spread from China to Korea and Japan by the 6th century CE; it retained a dominant position in China until the decline of the Tang dynasty in the 9th century. Thereafter Buddhism remained important in China, but more as a private than an officially sponsored religion.

Buddhism also interacted in China with religious Daoism, especially from the 3rd century CE. Religious Daoism, in the form of several competing sects, absorbed many of the local religious temples and doctrines of ancient China. It offered believers immortality or reincarnation in a celestial pantheon, and amassed a canon of sacred texts rivaling that of Buddhism. Daoism spread westward into CentralAsia along the Silk Road, providing, just as Buddhism had done, religious facilities for traveling believers; many of the important Buddhist temple complexes of Central Asia show Daoist influence or incorporate Daoist chapels. The Chinese Chan tradition of Buddhism (called “Zen” in Japanese) owes a great deal to Buddhist-Daoistsyncretism.

Meanwhile, in the western reaches of the Silk Road, important changes were also taking place. Christianity was transformed, in the century orso after 50 CE, from a local phenomenon in the region now comprising Israel and Palestine to a rapidly expanding, proselytizing religion through the efforts of the major Christian apostles. Christianity thrived especially at the expense of classical paganism; in Christianity’s original homeland, Judaism remained the dominant but non-proselytizing religion even as it also evolved new traditions of study and practice.

Christianity spread eastward as well as westward, in the process evolving various differences from place to place in doctrine and forms of worship. The Christianity of the Silk Road was primarily the form known as Nestorianism, after the teachings of Nestorius, a 5th-century patriarch of Constantinople who soon outraged the Roman and Byzantine worlds with his unorthodox doctrines, such as taking from the Virgin her title “Mother of God.” Nestorian Christianity spread to Persia, India, and China, bringing with it the Syriac language and script ( the basis of the writing systems of several Central Asian languages); a famous inscribed stela (standing stone tablet) in Xi’an, dated 781, commemorates the official arrival of Nestorian missionaries in China. By that time, Nestorian churches were to be found in cities all along the Silk Road, though there were undoubtedly many fewer Christians than Buddhists in Central Asia.

Another Middle Eastern faith that was important on the Silk Road for a time was Manichaeism, established by the Persian prophet Mani in the 3rd century CE. Mani arose from the Zoroastrian tradition, and consciously incorporated elements of Zoroastrianism, Christianity, Hinduism, Buddhism, and other faiths into his own doctrines; he saw himself as the successor to Zoroaster, the historic Buddha, Jesus, and other great ancient religious teachers. Manichaeism, like Zoroastrianism, emphasized the struggle between good and evil, light and darkness; it offered salvation to the Elect, those who were deeply immersed in the faith’s teachings. Manichaeism became an important rival of Christianity in the Middle East and Mediterranean North Africa, and was known all along the Silk Road (though with little or no impact on China and East Asia), but its influence began to wane by the end of the 6th century.

Silk Road faiths from the Middle East to the north western reaches of China were challenged and, in time, displaced by the spread of Islam, which is at present the faith of the majority of people in the countries spanned by the old Silk Road.

Muhammad, the Prophet of Islam, was born around 570 CE. At the age of40, according to Muslim tradition, he became the recipient of a series of revelations, recorded in the Quran, which is for Muslims a faithful recording of the entire revelation of God sent through Muhammad. The basic teachings of the Quran were belief in One God, unique and compassionate; the necessity of faith, compassion, and morality in human affairs; accountability of human actions; and the recognition that the same God had sent Prophets and Revelations to other societies, which Islam affirmed while regarding the Quran as the final message and Muhammad as the last of the divine messengers.

Although the initial spread of Muslim rule and authority to neighboring regions, which took place after the death of the Prophet in 632, was a result of conquest, the actual process of converting the peoples in these regions to Islam took a long time. It was effected primarily through the work of Muslim preachers, traders, and rulers. On the whole, the process of conversion to Islam, with a few exceptions, was a peaceful one. Most Muslims followed the Quranic injunction “There is no compulsion in religion” (Ch.2:256) and spread their faith more by example than by coercion.

In the Silk Road context, a good example of this process are the Sufis, devotees committed to spiritual life and unity among traditions, whose teachings of Islam exist in all the vernaculars and cultures of Silk Road peoples. The full diversity of Muslim traditions, schools of thought, and civilizing influences have flourished along the Silk Road. These include the development of philosophy and science; law and history; literature and the arts; and the expressions in music and dance of the devotional and creative spirit of Islam. That pluralism still denies the life of most Muslims living along the old Silk Road. At present, at least 560 million Muslims live in Asia, almost half of the total number of Muslims in the world.