An Introduction to the Great Indian Epic 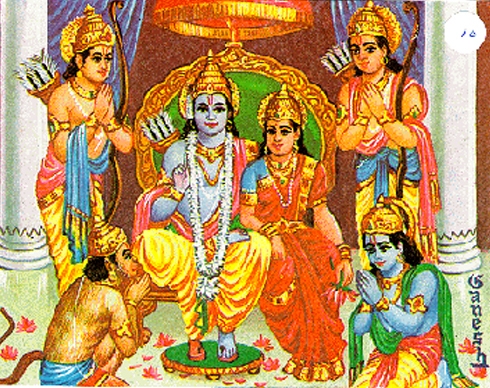 The Ramayana is an all-popular epic in South and Southeast Asia. It is the story of King Rama who must save his kidnapped wife, Sita. Along the way, it teaches Hindu life lessons. The Ramayana is told and retold orally, through literature (and comic books!), plays, movies and is reference in many other forms of popular culture today.

The Ramayana by the sage Valmiki is one of the great epics of the Sanskrit language, and is dated to approximately 200 B.C.E. There are many other versions of the epic in the many regional languages found in South Asia. Although the same core narrative is used (or referred to) in most of these versions, there are significant differences among them. This is particularly true regarding how the story ends; see below. The basic storyline is provided here, but teachers and students should expect to see great variation and greater detail with reference to each episode.

Rama was the eldest son of the great king Dasharatha. The gods had declared that he was born for the specific purpose of defeating the demon-king Ravana. He is considered to be the seventh incarnation of the great god, Vishnu.

Rama won the hand of his wife Sita in an archery contest, in which he was the only contender able to bend a bow that had once belonged to Shiva. Sita had been born of a furrow in the earth (this is what her name means). The two were extremely happy together, and returned to live in Rama's home, in Ayodhya.

Rama's stepmother, Kaikeyi, wanted to promote her son Bharata as heir to the throne of her husband, Dasharatha; Rama was eldest, and the honor rightly was due him. Kaikeyi called in several favors her husband had promised her, and forced Dasharatha, who could not go back on his promises to his wife—-to exile Rama for fourteen years. Rama's brother Lakshman and his wife insisted on accompanying him, and they left together. Dasharatha died of grief, and Bharata attempted to persuade his brother to return. Rama, also bound not to go back on his word, refused. Bharata pledged to rule in Rama's name until his return.

Rama, Sita, and Lakshman wandered in the forest until Rama was seen by an evil spirit, who fell in love with him. Rama rejected her and she attacked with her allies, only to meet defeat at the hands of Lakshman and Rama. She appealed to her brother Ravana, the strongest and most dangerous demon on earth at that time, for help. Ravana decided to kidnap Sita, the wife of Rama.

One of Ravana's demon followers assumed the form of a splendid deer, who aroused the interest of Sita. She asked Rama to retrieve the deer. Lakshman drew a line or circle around Sita to protect her magically, and went to aid his brother. While he and his brother were thus engaged, Ravana came to Sita in the guise of a holy man. Tricking her in this way to cross the protective line, he kidnapped her and took her to his palace on the island of Lanka.

Upon returning and finding Sita gone, Rama despaired. Accompanied by his brother, he went in search of her. On the way the two killed a demon whose liberated spirit told them to seek the help of Sugriva, the monkey-king. The brothers sought out the king, and helped him to regain control of his kingdom, which had been usurped by his half-brother. In gratitude, Sugriva dedicated his armies and his finest general—Hanuman, the son of the wind—to the quest to retrieve Sita. Hanuman discovered Sita's location and visited her there, reassuring her that Rama would save her. He suggested that a huge bridge to the island be constructed to allow the siege of Lanka. After great battles and acts of heroism, the siege was completed and Ravana defeated. Sita was rescued.

Many versions of the Ramayana end thus with return of Sita and Rama to their kingdom after fourteen years of exile, and the commencement of Ram Rajya, the glorious time of the rule of Ram. Other versions, such as that by Valmiki, end with the questioning of Sita's loyalty during the time of her kidnapping, when she spent so much time in another man's home. In such versions, Sita returned to her husband only to be put to a fire test to prove her loyalty. She passed this test, only to be questioned again later. She was then banished with her two unborn twin sons. Later asked to return to the kingdom, she did so only to stand before the assembly, calling on the earth (from which she was born) to take her back again if she had remained pure. The story ends with her absorption into her mother, the earth, and her ultimate vindication.