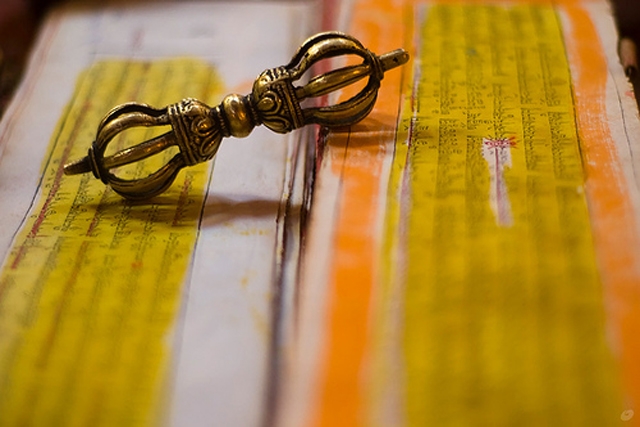 This reading features thematic comparisons among texts of the great world religions: Hinduism, Buddhism, Confuciansm, Christianity, Daoism, Islam, Judaism and Shinto. The purpose is not to compare religions, but to give readers some context for understanding why such diverse religious and philosophical beliefs have have existed side by side, particularly along the Silk Roads.

The Silk Roads encompassed a diversity of cultures embracing numerous religions and world views from a vast region stretching from Venice, Italy, to Heian (present day Kyoto), Japan. Between these two geographic end points, belief systems that are represented include Buddhism, Confuciansm, Christianity, Daoism, Hinduism, Islam, Judaism and Shinto. During the height of Silk Roads trading in the 8th century, Buddhism, Islam, and Nestorian Christianity were the dominant religions. Using quotes from translation of religious texts help shed light on the similarities and differences among belief systesm and remind us of how cultural interchange are represented in the ancient and contemporary world.

On Prayer and Worship

Sitting cross-legged,
They should wish that all beings
Have firm and strong roots of goodness
And attain the state of immovability.

Cultivating concentration,
They should wish that all beings
Conquer their minds by concentration
Ultimately, with no reminder.

When practicing contemplation,
They should wish that all beings
See truth as it is
And be forever free of oppression and contention.
—Buddhism. Garland Sutra, 11

Lord of Creation! No one other than Thee pervades all these that have come into being. May that be ours for which our prayers rise, may we be masters of many treasures!
—Hinduism. Rig Veda, 10.121.10

Establish regular prayers at the two ends of the day and at the approaches of the night: for those things that are good remove those that are evil. This is a word of remembrance to those who remember.
—Islam. Qur’an, 11.114

Rabbi Yohanan said, “‘Would that man could pray all day, for a prayer never loses its value.”’
—Judaism. Jerusalem Talmud, Berakot, 1.1

If the poorest of mankind come here once for worship, I will surely grant their hearts’ desire.
—Shinto. Oracle of Itsukushima

On Good and Evil

The five sources of happiness; the first is long life; the second, riches; the third, soundness of body and serenity of mind; the fourth, love of virtue; the fifth is an end crowning the life. Of the six extreme evils, the first is misfortune shortening the life; the second,sickness; the third, distress of mind; the fourth, poverty; the fifth, wickedness; the sixth, weakness.
—Confucianism. Book of History, 5.4.9

That again which is virtue may, according to time and place, be sin.Thus appropriation of what belongs to others, untruth, and injury and killing, may, under special circumstances, become virtue.

Acts that are apparently evil, when undertaken from considerations connected with the gods, the scriptures, life itself, and the means by which life is sustained, produce consequences that are good.
—Hinduism. Mahabharata, Shanti Parva, 37.11,14

Evil and good are not equal, even though the abundance of evil may amaze you; so heed God, you men of wits, so that you may prosper!
—Islam. Qur’an, 5.100

Woe to those who call evil good and good evil, who put darkness forlight and light for darkness, who put bitter for sweet and sweet for bitter.
—Judaism and Christianity. Isaiah, 5.20

On The Golden Rule of Reciprocity

Whatever you wish that men would do to you, do so to them.
—Christianity. Matthew, 7.12

Try your best to treat others as you would wish to be treated yourself, and you will find that this is the shortest way to benevolence.
—Confucianism. Mencius, VII A 4

One should not behave towards others in a way which is disagreeable to oneself. This is the essence of morality. All other activities are due to selfish desire.
—Hinduism. Mahabharata, Anusasana Parva, 113.8

You shall love your neighbor as yourself.
—Judaism and Christianity. Leviticus, 19.18

On Blessings and Love

The Great Compassionate Heart is the essence of Buddhahood.
—Buddhism. Gandavyuha Sutra

Abundant is the year, with much millet and much rice;
And we have our high granaries,
With myriads and hundreds of thousand, and millions (of measure in them); For spirits and sweet spirits,
To present our ancestors, male and female,
And to supply all our ceremonies.
The blessings sent down on us are of every kind.
—Confucianism. Book of Songs, Ode 279

To love is to know Me,
My innermost nature, the truth that I am.
—Hinduism. Bhagavad Gita, 18.55

God is All-gentle to His servants, providing for whomsoever He will.
—Islam. Qur’an, 42.19

As a mother with her own life guards the life of her own child, let all-embracing thoughts for all that lives be thine.
—Buddhism. huddaka Patha, Metta Sutta

Let no one seek his own good, but the good of his neighbor.
—Christianity. 1 Corinthians, 10.24

What sort of religion can it be without compassion? You need to show compassion to all living beings. Compassion is the root of all religious faiths.
—Hinduism. Basavanna, Vacana 247

Those who act kindly in this world will have kindness.
—Islam. Qur’an, 39.10

All men are responsible for one another.
—Judaism. Talmud, Sanhedrin, 27b

Those who do not abandon mercy will not be abandoned by me.
—Shinto. Oracle of Itsukushima

The Dao gave them birth; The power of the Dao reared them, Shaped them according to their kinds, Perfected them, giving to each its strength.
—Daoism. Daode jing, 51

Nothing whatsoever exists without me or beyond me. The atoms of the universe may be counted, but not so my manifestations; for eternally I create innumerable worlds.
—Hinduism. Srimad Bhagavatam, 11.10

God it is who created the heavens and the earth, and that which is between them, in six days. Then He mounted the throne.
—Islam. Qur’an, 32.4

In the beginning God created the heavens and the earth.
—Judaism and Christianity. Genesis, 1.1

The mind which gives life to all the people in the world: Such is the very mind which nourishes me!
—Shinto. Moritake Arakida, One Hundred Poems about the World

Relatives and friends and well-wishers rejoice at the arrival of a man who had been long absent and has returned home safely from afar. Likewise, meritorious deeds will receive the good person upon his arrival in the next world, as relatives welcome a dear one on his return.
—Buddhism. Dhammapada, 219–20

Now my breath and spirit goes to the Immortal, and this body ends in ashes; OM O Mind! Remember. Remember the deeds. Remember the actions.
—Hinduism. Isha Upanishad, 17

And among His signs is this: you see the earth barren and desolate, but when He sends down rain to it is stirred to life and yields increase. Truly, He who gives life to the dead earth can surely give life to men who are dead. For He has power over all things.
—Islam. Qur’an, 41.39

The dust returns to the earth as it was, and the spirit to God who gave it.
—Judaism and Christianity. Ecclesiastes, 12.7