Australia and Japan: Stepping Up the Strategic Partnership 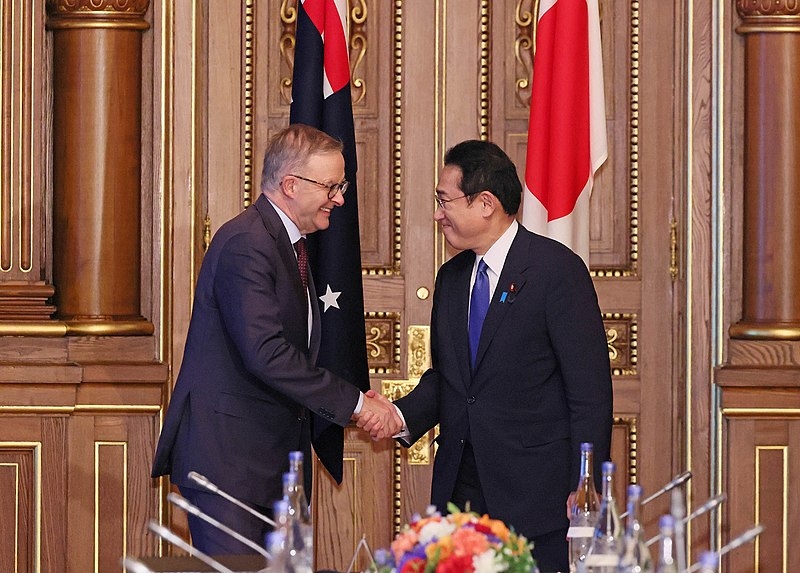 What are the next steps for the Australia-Japan strategic partnership? How can Australia and Japan play a leadership role in an increasingly contested Indo-Pacific?

Japan has been characterised as one of Australia’s closest regional partners. In recent years, both nations have taken unprecedented steps to overhaul their strategic posture –including record increases in defence spending. Yet despite such advances, an increasingly volatile Indo-Pacific will require deeper bilateral collaboration to respond to the pressing security challenges of our time.

Australia-Japan: Stepping up a Special Strategic Relationship in Asia is supported by the Commonwealth through the Australia-Japan Foundation, which is part of the Department of Foreign Affairs and Trade.

Dr Thomas S. Wilkins a Senior Fellow at the Australian Strategic Policy Institute affiliated with the Washington DC Office.He currently directs the Master of International Relations and Master of International Security degree programs at the Department of Government and International Relations (GIR) at the University of Sydney. There he lectures in subjects such as Australian Foreign & Security Policy, Strategy and Security in the Asia-Pacific and Alliances & Coalition Warfare.

His academic research focuses on strategic affairs in the Indo-Pacific, especially Australia-Japan bilateralism, and the US-alliance network. His work has been published in journals such as Asia Policy, Security Challenges, and Asian Security, with his latest monograph Security in Asia-Pacific: The Dynamics of Alignment, appearing with Lynne Rienner Press (2019).

From 2018-2022 Dr Wilkins was a Senior Fellow at the Japan Institute of International Affairs (JIIA) thinktank in Tokyo. He worked to produce a portfolio of Policy Briefs addressing security and historical issues for the Japan Information Centre (JIC) and has also authored reports for the MacDonald Laurier Institute (MLI) and Centre for Security, Diplomacy and Strategy (Brussels), as well as serving as a Regular Contributor to the Sasakawa Peace Foundation’s International Information Network Analysis.

Dr Wilkins holds a Ph.D in International Security from the University of Birmingham. He also Holds an M.Phil in Asian Studies from the University of Sydney, and a Master of International Relations and Bachelors in History from Birmingham. He spent a further two years in the US as a Post-Doctoral Fellow at the University of San Francisco Center for Asia-Pacific Studies, and as POSCO Fellow at the East West Center, Honolulu. He has since been awarded fellowships from the Japan Foundation and Japan Society for the Promotion of Sciences to conduct research in Tokyo, and has taught at Tokyo, Keio and Meiji Universities as a Visiting Professor. He was formerly on the Editorial Team of the journals Pacific Affairs and Japanese Studies.

Hayley Channer is the Director of the Economic Security Program with the United States Studies Centre at the University of Sydney. Hayley has led a diverse background having worked as an Australian Government official, Ministerial adviser, think tank analyst, and represented global non-profit organisations.

Immediately prior to her current role, Hayley was a Senior Policy Fellow with the Perth USAsia Centre. In this position she published analysis on China’s Belt and Road Initiative, infrastructure and investment in the Indo-Pacific, and multilateral economic frameworks. She also provided policy guidance to senior Australian and US government officials on how to better engage the private sector.

In an earlier role, Hayley was an Assistant Director within the Strategy, Policy and Industry Group at the Australian Department of Defence. With Defence, she produced and implemented international policy and advised senior military personnel, including on exercise. For Exercise Talisman Sabre 2017, Hayley was selected as the Australian Policy Adviser to the Commander, US Third Fleet in San Diego and worked under simulated wartime conditions.

Frequently quoted in the Australian and international media, Hayley’s work has been published in Foreign Policy, the Australian Financial Review, the Sydney Morning Herald, The Diplomat Magazine, The Hill, and the Washington Examiner. She has given live television and radio interviews and presented around the world to large audiences. Hayley has a Master of International Relations from the University of Queensland and Certificate in Public Policy from the London School of Economics.

Ryosuke Hanada is researcher at the Macquarie University, working on Japan's foreign policy and its mechanisms. Ryosuke Hanada was an Indo-Pacific Fellow at the Perth USAsia Centre. He has also been a Research Fellow at the Japan Institute of International Affairs until March 2020, researching Japan’s foreign policy in the Indo-Pacific region and secretariat of the Council of Security Cooperation in the Asia Pacific (CSCAP) Japan. Mr Hanada has been part of various fellowship programs, including Japan-US Partnership Program of the Research Institute of Peace and Security (RIPS), Young Strategist Forum of the German Marshall Fund (GMF) and Strategic Japan Program of the Center for Strategic and International Studies (CSIS).

He acquired Bachelor in Law, Waseda University, Tokyo and Master of Arts in International Politics, the University of Warwick, the United Kingdom.