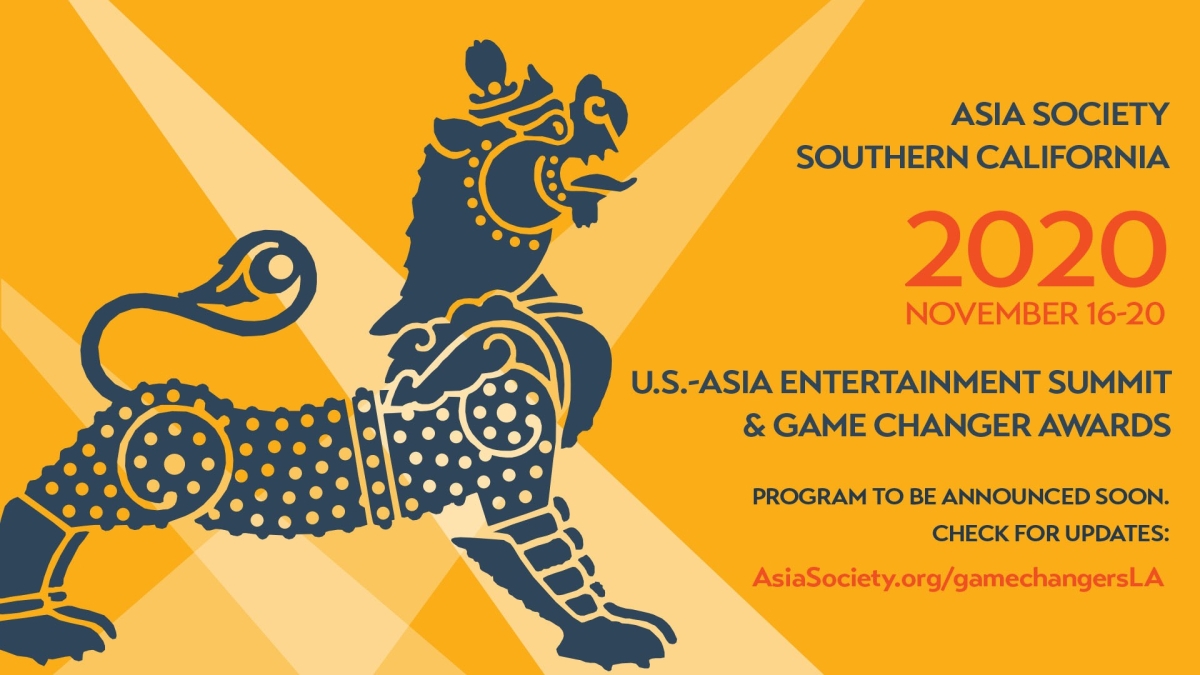 We are pleased to announce our first Entertainment Game Changer, Lang Lang, who will perform during the Summit. He will be featured alongside fireside chats and panel discussions which will analyze the trends and forces transforming entertainment throughout Asia. Sessions will look at digital streaming, animation, esports, and regional markets from India to Indonesia. Closer to home, we’ll continue to track the inroads Asian Americans are making in Hollywood.

Join Asia Society Southern California for a discussion on Asian representation in animation with Netflix Producer Peilin Chou and actor Cathy Ang. Released on October 23, 2020, Netflix's Over the Moon is the first animated film backed by a major Hollywood studio to feature an entirely Asian cast. In addition to Ang, the film stars Sandra Oh, Ken Jeong, Phillipa Soo, Margaret Cho, and John Cho, among others. Directed by Oscar®-Winning Filmmaker & Animator, Glen Keane, and produced by Gennie Rim and Peilin Chou, the film represents the growing influence of Asian American storytelling in Hollywood. The panelists will explore the significance of the film in advancing diversity in Hollywood and the resonance for a global audience of a musical adventure blending Chinese mythology and childhood fantasy. This session will be moderated by Janet Yang, Over the Moon Executive Producer and Chair of the U.S.-Asia Entertainment Summit. She will also take a rare, behind-the-scenes look at how this most unlikely movie got made and rose to #1 on Netflix its opening weekend.

Cinemas to Smartphones: Streaming Wars and the Future of Bollywood and Indian Content

Join director Shekhar Kapur, studio executive Sameer Nair and entertainment lawyer Gowree Gokhale for a lively discussion on the current state of India’s entertainment industry with a particular focus on television and film. The panelists will discuss their views on the streaming wars taking place by dozens of companies, both international and domestic, vying for dominance in this strategic country. The discussion will consider the growth trajectories of the Indian market and the role of original content. The panel will also evaluate the prospects for increased exports of Indian content worldwide beyond the traditional diaspora audiences. Additionally, the panelists will share their perspectives on the implications of the global pandemic on Bollywood and regional language film industries as production resumes and theatres cautiously reopen. This program will be moderated by industry expert Rick Ambros.

Exploring the Differences Between How the East and West Approach Esports

Join Asia Society Southern California for a discussion on how the world of esports is developing in Asia and the United States with experts on both sides of the Pacific. Talon Esports CEO Xiao Yi Zhang, TSM Head of Operations Walter Wang Jr., and Esports Media Analyst John Oliverius will do a deep dive into the trends shaping the esports industry. They will discuss the 2020 League of Legends World Championship, streaming, brands, and monetization. Lastly, they will explore the collegiate space in the United States and the implications for growing the pipeline of talent. Miles Yim, Communication Strategist at The Story Mob, will moderate.

The Rise of Indonesia's Entertainment Industry

Join Asia Society Southern California with studio executive Wicky V. Olindo, director Angga Dwimas Sasongko and actor Raline Shah for a discussion on the growth of the entertainment industry in Southeast Asia in general and the Indonesian market specifically. They will share their perspectives on how the increased attention from international streaming giants and studios, as well as the growth of the domestic box office, will impact the local creative industry. Furthermore, they will discuss the cross-cultural influences are shaping local content across the region. This program will be moderated by award-winning film producer, Shanty Harmayn.

Join Asia Society Southern California for three fireside chats with three leading Chinese and U.S. entertainment executives as they share their insights into the current state of the China and U.S. media industries. Long-time U.S.-China entertainment industry veteran Ellen Eliasoph will speak with Manatt Partner and Entertainment Group Leader Lindsay Conner to give insights into the past 25 years of the U.S.-China entertainment industry as well as what the future may hold. Beijing Culture's President of Motion Pictures Entertainment Miao Zhang and Variety’s Asia Editor Patrick Frater take a deep dive into the shifts occurring within China’s entertainment industry including film and TV production, development, and streaming. They’ll evaluate the long-term effects of the pandemic on the industry and the significance of China possessing the world’s largest functioning box office market. Skydance Media President and CEO Jesse Sisgold and Paul Hastings Partner and Asia and Europe Media & Entertainment Chair Stephen Saltzman will consider the role of strategic partnerships in cross-border media investments, including Skydance’s partnership with Tencent. The session will conclude with remarks and a performance by 2020 Entertainment Game Changer and world-renowned pianist Lang Lang!

Join Asia Society Southern California for a discussion on Hollywood's New Anime Gold Rush with John Ledford, founder and CEO of Sentai Filmworks, Maki Terashima-Furuta, the president of Production I.G, USA and Jason DeMarco, Senior Vice President/Creative Director, Adult Swim/Cartoon Network On-Air. This session will be moderated by author Roland Kelts, the Tokyo-based journalist and scholar known for his bestselling book, “Japanamerica: How Japanese Pop Culture has Invaded the US.”

Japanese anime is the only non-English-language global IP that has produced several of the world’s top-grossing franchises and a long list of Hollywood adaptations. Anime is now transforming and being transformed by the worldwide growth of streaming media, which has seen massive expansion during the pandemic. In Japan, the recent record-breaking smash-hit anime movie, “Demon Slayer: Mugen Train,” has shaken the global box office, earning $200M domestically in just 24 days. In Hollywood, the Academy Museum of Motion Pictures will open with its first exhibition dedicated to a Japanese artist: maestro Hayao Miyazaki.

What is so special about anime? The panel will discuss the value and charm of anime not only as a form of entertainment, but also as a form of culture that appeals to both adults and children in Japan, Hollywood and the world.