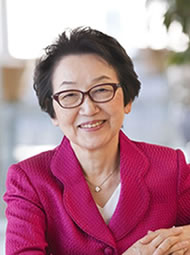 Yoriko Kawaguchi was a Member of the House of Councilors for the Liberal Democratic Party from 2005 to 2013. She was Special Adviser to the Prime Minister of Japan on foreign affairs from 2004 to 2005, Minister for Foreign Affairs from 2002 to 2004, and Minister of the Environment from 2000 to 2002. She also served as Co-chair of the International Commission on Nuclear Non-Proliferation and Disarmament from 2008 to 2010.

Ms. Kawaguchi holds a professorship at the Meiji Institute for Global Affairs. She is a member of the Asia Pacific Leadership Network, Executive Advisor to the Sasakwa Peace Foundation and Distinguished Fellow at the Tokyo Foundation. She is a member of the Board of Trustees of the International Crisis Group, the Toshiba International Foundation, and the United States-Japan Foudnation. She also serves as Outside Director to the Toyota Tsusho Corporation and the Japan Peteroleum Exploration Co., Ltd.

Prior to this, Ms. Kawaguchi was a Managing Director of Suntory Ltd., Director General of Global Environmental Affairs at the Ministry of International Trade and Industry, and Minister at the Embassy of Japan to the United States. She holds an M.Phil in Economics from Yale University and a BA in International Relations from the University of Tokyo. .