Article for The Diplomat 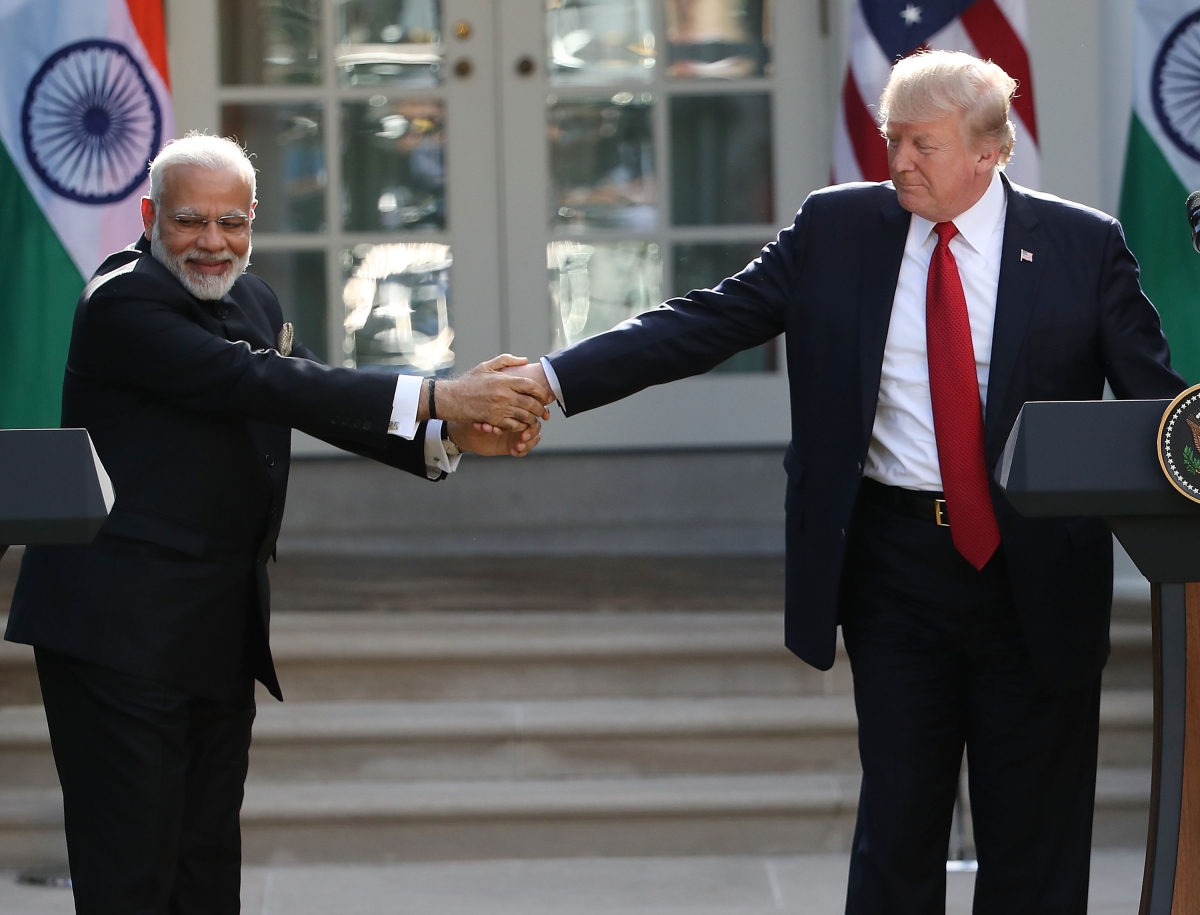 This article was originally published by The Diplomat.

Visiting India next week for the first time since coming to office, U.S. President Donald Trump will be welcomed with a high degree of pomp and circumstance. On February 24 and 25, Trump will be greeted by Indian Prime Minister Narendra Modi in Ahmadabad, visit the Taj Mahal in Agra, participate in bilateral meetings and banquets in Delhi, and even attend a “Namaste Trump” rally in a stadium that evokes the boisterous “Howdy Modi” rally in Texas last September.

Trump’s first official visit to India is important because it underlines the significance of the bilateral relationship and adds momentum to joint initiatives. Unfortunately, the lack of substantive agreements sealed ahead of the visit highlights how stalled the U.S.-India “strategic partnership” has become. After sustained progress under Bush-Singh, Obama-Singh, and Obama-Modi administrations, the Trump-Modi era has seen this overall relationship plateau, even as defense ties have strengthened.

The only noteworthy agreement that was expected during the visit has now been put on ice. Last week, U.S. Trade Representative Robert Lighthizer canceled his trip to India to finalize the details of a modest bilateral trade deal that has eluded the two governments for over a year now. Earlier this week, Lighthizer reportedly informed his Indian counterparts that negotiations might need to be completed after the U.S. elections in November. And Trump confirmed that a trade deal is unlikely to be finalized while he is in India.

This resembles a similar episode last September, when no deal emerged despite serious efforts leading up to and during Modi’s visit to the United States for the United Nations General Assembly. Given previous failures, Alice Wells, the Trump Administration’s most senior South Asia diplomat, had warned that “it would be a big setback” if a limited trade deal did not materialize during Trump’s visit. That is now a reality.

This was a completely avoidable problem of Trump’s own making. The elusive deal is meant to address trade tensions that arose after the Trump administration imposed broad tariffs on steel and aluminum in March 2018 and then ended India’s status under the Generalized System of Preferences (GSP) system last year (provocatively, right after Modi’s reelection). India had been the biggest beneficiary of the program, with $5.7 billion of its exports to the United States in 2017 given “duty-free status.” India responded to that second unilateral action with retaliatory tariffs on 28 U.S. goods, leading to the current impasse.

According to Kashish Parpiani of the Observer Research Foundation, trade negotiations over the past year have revolved around India seeking reentry to the GSP program, while U.S. negotiators have asked India to relent on data localization, price caps on U.S. pharmaceutical imports, and market access for U.S. agricultural products, especially dairy. Unfortunately, the two sides did not narrow their differences enough to secure a deal at this stage.

This is problematic because it allows what is ultimately a trivial trade dispute to continue to distract the two countries from a far more ambitious cooperative agenda. Parpiani points out that “American exports to India have increased in the Modi-Trump era” and that the U.S. trade imbalance with India actually decreased from $31 billion in 2014 to $25 billion 2018. Given this positive trajectory, how small the imbalance with India is relative to the overall U.S. deficit, and that India is a key strategic partner, it is troubling how much diplomatic energy has been devoted to this issue to no avail.

With the exception of defense cooperation, the bilateral agenda has been hijacked by Trump’s single-minded obsession with the trade deficit and his administration’s inability to see the forest for the trees when it comes to balancing trade priorities with broader strategic ones. The impasse has dominated the bilateral relationship for the past two years taking oxygen away from more critical strategic imperatives, chief among them being developing a shared approach to deal with the rise of China.

With or without the trade deal, it is clear the U.S.-India relationship is currently punching below its weight. Myopic trade policies on both sides threaten to undermine the ambition and scope of the relationship in the medium and long term. Instead of planning for the future, both governments have taken steps that have impeded the grand partnership many envisioned in the past.

Washington has long sought to cultivate Delhi as a critical strategic partner in the Asia-Pacific, and in Modi it finally had an Indian leader that was receptive to its pitch. However, since Trump came to power, it has become harder for India to see the United States as a credible long-term partner. Delhi has watched as the Trump administration has insulted U.S. allies and lowered the U.S. military and diplomatic footprint in the region. After increasing its engagement in the Asia-Pacific through the Act East policy and signing a “Joint Strategic Vision for the Asia-Pacific and Indian Ocean Region” with the United States in 2015, Indian policymakers increasingly wonder whether they should continue to stick their necks out if they cannot count on the United States to be a reliable regional partner.

India’s economic policies have not helped matters either. While Modi is not obsessed with trade deficits, he shares Trumps’ suspicion of large trade deals. Both men view trade from a nationalist, India-First/America-First lens that is bad for their countries and the region. India’s decision to forsake the Regional Comprehensive Economic Partnership (RCEP) trade agreement in November, after seven years of negotiation, was a damning sign that it is not ready to open up its economy or support a regional free trade agenda. Abandoning RCEP was a wasted opportunity for India, one that would have boosted its economy and enhanced its ties to key Asia-Pacific nations.

To make matters worse, the two bedrocks of U.S.-India ties have both weakened over the past year.

First, Modi has taken a sledgehammer to the long-standing bond connecting the United States and India: their shared democratic values. While the Trump White House has essentially given India a pass on its security clampdown and revocation of special autonomy in Kashmir, the controversial Citizenship Amendment Act, and other Hindu nationalist policies, the past seven months have discolored perceptions of Modi and India among key U.S. stakeholders. While there remains bipartisan support for stronger ties with India, many in and out of government are “concerned” about what Modi’s right turn means for India’s democratic and human rights credentials as well as stability in South Asia.

Second, this is all happening as India’s economy, which has been the catalyst for the blossoming of U.S.-India ties since the turn of the century, is slowing down. After growing as fast as 8 percent in the previous decade, the International Monetary Fund estimated that India would grow at only 4.8 percent in 2019. This is an alarming rate for a country with India’s vast development needs, and one that is experiencing the worst unemployment crisis in decades. Instead of embracing free trade and market economics under these trying circumstances, the Indian government’s latest budget threw cold water on such hopes by once again eschewing tough reforms and raising tariffs on a number of additional items, including footwear, dairy, and appliances.

If the economic slowdown is prolonged and the Indian government continues to shrink civic openness and democratic freedoms, U.S. affinity for India could diminish in the short term, further dampening the bilateral mood.

The mere fact that Trump is finally going to India is a victory of sorts, and his trip will feature some welcome announcements. For instance, India has agreed to buy U.S. naval helicopters to the tune of $2.6 billion, in a sign that defense trade and cooperation remain robust. While these piecemeal victories may appeal to Trump’s transactional nature and political imperatives, they do little to propel the United States and India toward the lofty goals of previous governments – such as reaching $500 billion in bilateral trade – goals that seemed both laudable and attainable just a few years ago.

Anubhav Gupta is the associate director of the Asia Society Policy Institute in New York. The views here are his own. Follow him on Twitter at @AndyGupta21.