Political and Economic Trends in Asia 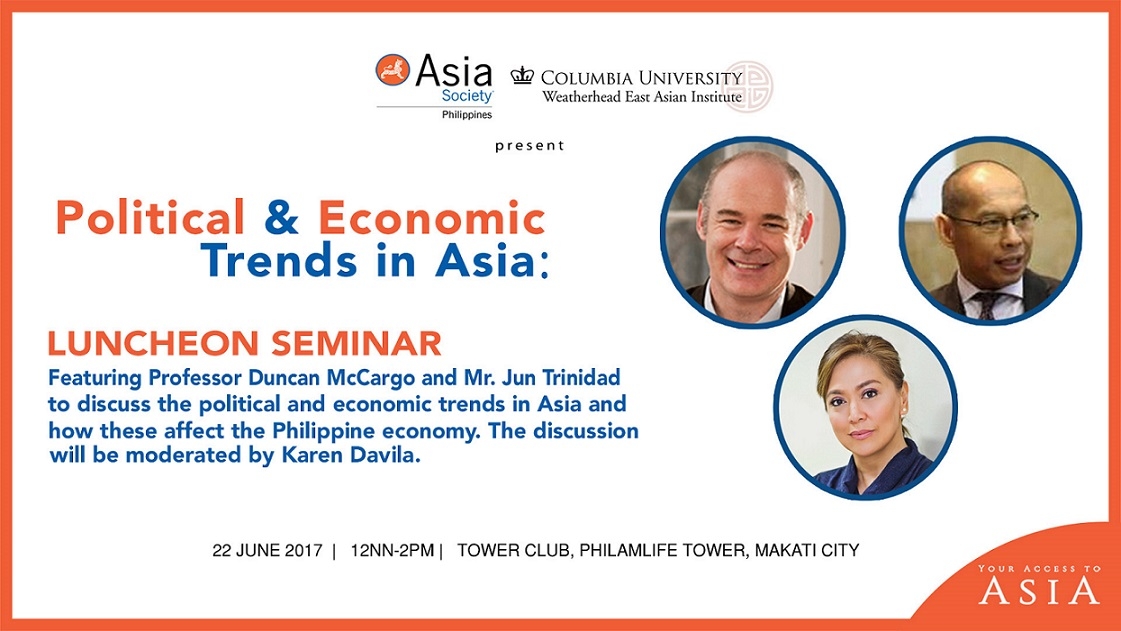 Asia Society Philippines will host a luncheon seminar, entitled “Political & Economic Trends in Asia”, that will be held on 22 June 2017, from 12nn to 2pm, at the Tower Club, Philamlife Tower, Makati City.

The luncheon will feature a presentation by visiting Professor of Political Science from Columbia’s Weatherhead East Asia Institute, Professor Duncan McCargo. Dr. McCargo will be joined by Economist, Mr. Jun Trinidad. The speakers will share their views on the recent political and economic trends in Asia and how these affect the dynamics of the Philippine economy.

Professor Duncan McCargo is prominent for his contributions on the current debates on the politics of Thailand, but he is centrally concerned with the nature of power. His fascination on the undercurrents of the Asian political system had led him to study questions relating to the use of media, sub-national conflicts, and the politics of justice, among other issues.

Mr. Jun Trinidad is a well-known scholar in the Economic sector. He earned his economics degree in the University of Santo Tomas, and further pursued his graduate studies in economics in Center for Research and Communications, now University of Asia and Pacific, and University of Manchester. Mr. Trinidad is an expert in macro analytics or forecasting where he focuses on understanding how these translated to market views on Philippine Peso and also on fixed income debt markets. His career started when he became a researcher in the Economic Forecasting Unit of CRC in the 70s. He is prominent for his position as Senior Economist of Citibank Philippines and Citibank Thailand, until recently, where he served for 17 years.