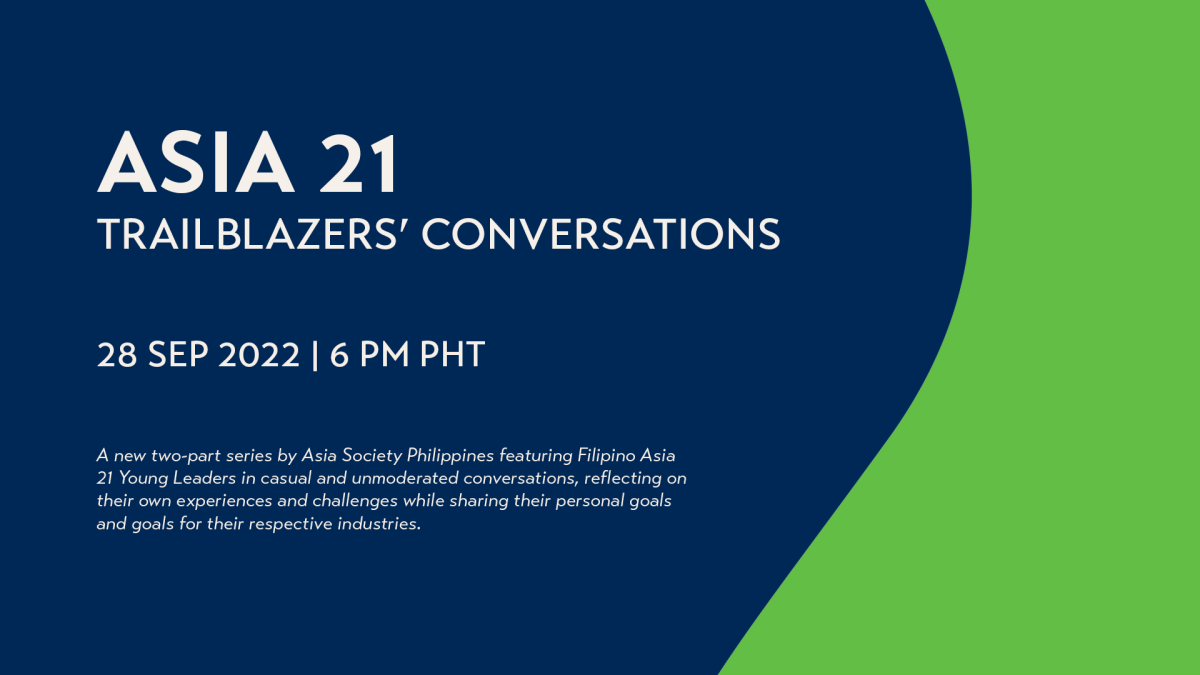 Asia 21 is the only network of young leaders focused on shaping a brighter future for the Asia-Pacific region. We [Asia Society] are laying the groundwork for a robust Asia-Pacific community capable of tackling the most vexing challenges facing the region – one leader, once connection, one project at a time.

This 2022, a new batch of Asia 21 Young Leaders joins the vibrant community and will meet at the Asia 21 Summit in Japan. As a prelude, Asia Society Philippines, gathers Asia 21 Philippine Fellows to introduce its newest addition to the growing network and get to know them through their advocacies.

Asia 21 Trailblazers’ Conversations is a two-part series with each episode featuring three Asia 21 Philippine Fellows in casual and unmoderated conversations— reflecting on their own experiences and challenges while sharing their personal goals and goals for their respective industries.

Join us with Asia 21 Philippine Fellows and trailblazers in data science and technology, Ibba Bernardo, Erika Legara, and Steph Sy.

Together, we look back on their journeys to being trailblazers, how far they’ve gotten with their fellow Asia 21 Leaders, and what their shared dreams are for the future. The catch-up conversation also provides insight into their role as leaders and how they continue to better lives through data science and technology.

Erika Fille Legara is a scientist, educator, and policy advisor. She has been recognized in the Philippines and abroad for her contributions to education innovation – particularly for “equipping Filipinos for a data-driven future” – since she took leadership in launching and designing the first data science graduate program in the Philippines.

Legara has also been leading the training of over 200 data science leaders with strong Asian anchoring at the Asian Institute of Management. As a scientist, she’s also been helping popularize STEM, inspiring youth to pursue careers in science, technology, engineering, and mathematics. She has also been working with the Philippine government in crafting a national artificial intelligence strategy aimed to uplift the Philippine economy and society.

In 2020, Legara received the National Academy of Science & Technology Outstanding Young Scientist award. In addition to her R&D work and consulting initiatives with enterprises, she has also authored over 20 peer-reviewed publications in the fields of complexity and artificial intelligence. Legara is a TOYM honoree – the most prestigious leadership award for Filipinos under 40. And in June 2019, she made it to Asia Tatler’s GenT list – the definitive list of young leaders shaping Asia’s future.

Stephanie Sy is a technology entrepreneur, and the founder, CEO, and Chief Data Scientist of Thinking Machines, a technology firm that helps organizations make better decisions by building artificial intelligence tools and data platforms. Working with various sectors, including the civic sector, government and academic institutions, the company has grown to become Manila’s best data science firm and a regional contender with core offices in Manila and Singapore. Prior to founding Thinking Machines, she worked at a startup until its $350 million exit via Google acquisition. Post-acquisition, she worked at Google.

She was featured on Forbes Asia’s 30 Under 30 list in 2018 for her work on enterprise technology and the Gen T 2019 list for technology innovation.

Ibrahim ‘Ibba’ Bernardo has been working with marginalized and underprivileged groups by giving them access to relevant technology. An IT entrepreneur since he was 22, he is the founder and CEO of Sari Software Solutions, a platform, systems, and mobile applications company that aims to leverage technology to empower the largest, underserved socio-economic sectors of society known as the base of the pyramid (BOP). His passion lies in bringing technology to the BOP with projects like the Solar Energy Foundation's Ride for Light which brought solar energy to far-flung off-grid areas, E-Dalaw which enabled virtual visit of inmates by their indigent families, and Buhayko.org for teaching blogging to underprivileged students living in slum areas.

Ibba also wears other hats as a technology and motorcycle journalist, entrepreneur, social media consultant, and IT lecturer. He represented the Philippines as an ASEAN Young Leader at the 2012 World Economic Forum in Bangkok. Sari, under Ibba won best in ICT at the 2015 Global Entrepreneur Summit/ Global Innovation through Science and Technology.