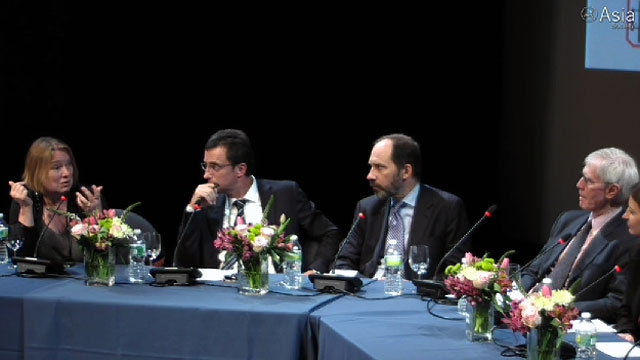 The event was notable not only for the journalists gathered and their collective experience in China, but also for its backward-looking focus. The Wall Street Journal's China department has been responsible for publishing some of the most exciting news to come out of China over the past few decades, most recently the Bo Xilai scandal.

After illustrating what life in China was like when they resided there, the panel discussed how China got where it is today, though none dared define contemporary China in simple terms. The change China has experienced did nothing less than astound these China watchers. They tried to illustrate the vast transformation China has undergone, and where it still desperately requires change.

Amanda Bennet visited the Special Economic Zone, Shenzhen, as it was being planned; upon seeing blueprints and “Jetsons-like” overpasses, her response was incredulity. Upon returning to China only six years later, her "jaw dropped" at the development. The economic growth that China's Communist Party had set its eyes upon was underway in some senses and achieved in others by the mid-'90s, but the panel was in a general agreement that economic growth and social liberalization hardly constitutes political progress.

Jeremy Page cautioned those tempted to conflate China's evolving civil society in the form of social media with real political progress. Indeed, though the Party has given more wiggle room for the Chinese citizenry to vent and discuss, they still have various mechanisms for rigid control, and show no signs of ceding any of that control.

Reflecting on a recent conference held in Singapore, Andy Browne shared his distaste for the propagandistic notion that the Chinese government lifted 250 million people out of poverty. “The other narrative is that after several decades of chronic economic mismanagement, murderous tyranny of the Great Leap Forward and the Cultural Revolution, the Chinese Communist Party finally stepped back far enough to allow 250 million Chinese people to lift themselves out of poverty.”

And as far as China has come in such little time, and though it has seen massive changes in its social and economic landscape, these China hands are wary of equating that with political change.