Co-Curator Walks Through 'Art of Reclusion' in 17th-Century China 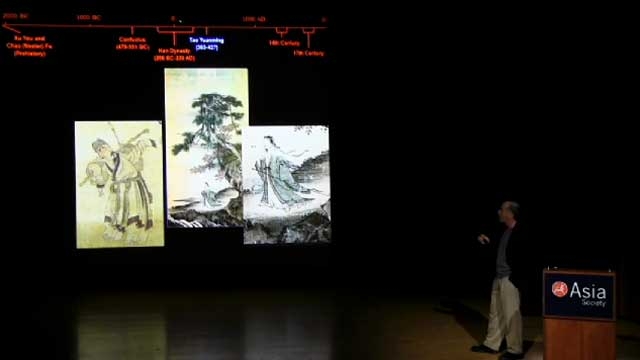 NEW YORK, March 14, 2013 — "If you're a recluse, there's no better place to live than New York," said Peter C. Sturman, professor of History of Art and Architecture at the University of California, Santa Barbara. His logic being that there are countless places to hide in such a busy city. A co-organizer of the exhibition The Artful Recluse: Painting, Poetry and Politics in 17th-Century China with Susan Tai, Sturman was beginning a talk to accompany and explain the selection of works in the exhibition on view at Asia Society Museum.

Displaying images of present-day New York City alongside images of present-day Santa Barbara, Sturman suggested that the dichotomy they represent between landscape and city seems to reflect the subject matter of many paintings from 17th-century China. This contrast, however, is a "red herring," detracting from the true and consistent theme of the recluse. Sturman's research focuses on this theme as it was explored by scholar-painters who lived during the end of the Ming dynasty and the early years of foreign conquest by the Manchu-ruled Qing dynasty. Akin to the Western perspective, the Chinese notion of a recluse consists of a man who escapes society to experience spirituality in nature. Unlike the West, Chinese society idealizes this conception and depicts recluses as "cultural heroes."

The general consensus among scholars is that the most prominent recluse in Chinese history is the renowned fourth-century poet Tao Yuanming, who renounced his government service by throwing his girdle in a tree, and that the theme of reclusion surfaced in China during the time of Confucius. According to Sturman, however, the theme of reclusion goes back even further, to 2000 BC, with the tale of Xu You and Chao (Nester) Fu. This tale, which involves Xu You cleaning his ear of the dirty political schemes he heard while working in government, informs the political dimension of reclusion, the Confucian model of the complicated relationship between emperors or kings and the virtuous countrymen they seek to serve them in their courts.

Tao Hongjing, for example, called himself a recluse but served the emperor at the same time. A scholar-painter who burned his scholar robes to announce his reclusion, only to become a great cultural figure who wrote books and even had an entourage, Chen Jiru is another prominent example of the flexible notion of reclusion in China. As scholar-painters, Chen Jiru and his close friend Dong Qichang explored reclusion in art, only one of the many different dimensions of reclusion, by collecting and creating a long lineage of paintings. Women artists like Xue Wu explored and artistically depicted reclusion in sex by painting sensual images of flowers.

Greater artistic realism illustrated the serious dimension of reclusion. In 1625, at the height of the purging of high officials in the Ming dynasty, Mi Wanzhong painted a large landscape complete with a tiny image of himself walking toward a thatched hut, which, Sturman proposed, represents refuge for a recluse. Xiang Shengmo, another major painter of the period, painted himself alongside a recluse in the Invitation to Reclusion of 1625-26. With the suicide of the emperor and the overthrow of the capital by a peasant rebellion, the Ming dynasty collapsed in 1644, enabling the Manchus to conquer all of China over the next 20-30 years. As a loyalist, Xiang's heart was rent by the emperor's death and the "rhetorical device" of reclusion that he used before the emperor's passing "became real" after the dynasty fell. The "image of reclusion" became the only place for reclusion. Loyalist artists emerged like Gong Xian, whose Landscape of 1689 (which Sturman described as "haunting and powerful") lures the viewer deep into its depths where he or she finds the mausoleum of the first Ming dynasty emperor.

The final artist Sturman discussed was Bada Shanren, an imperial prince of the Ming dynasty who went into the Buddhist priesthood for 30 years to avoid the Manchus. After leaving the priesthood, he "feigned madness" to attain a form of reclusion, which he then mimicked in his paintings. Using animals and plants as metaphors for human behavior, and modifying his calligraphy to fit into the composition of each painting in an artful and balanced manner, Bada Shanren lamented the loss of Ming dynasty loyalists to the Manchu-ruled Qing dynasty.

The Artful Recluse: Painting, Poetry and Politics in 17th-Century China is on view at Asia Society Museum through June 2, 2013.