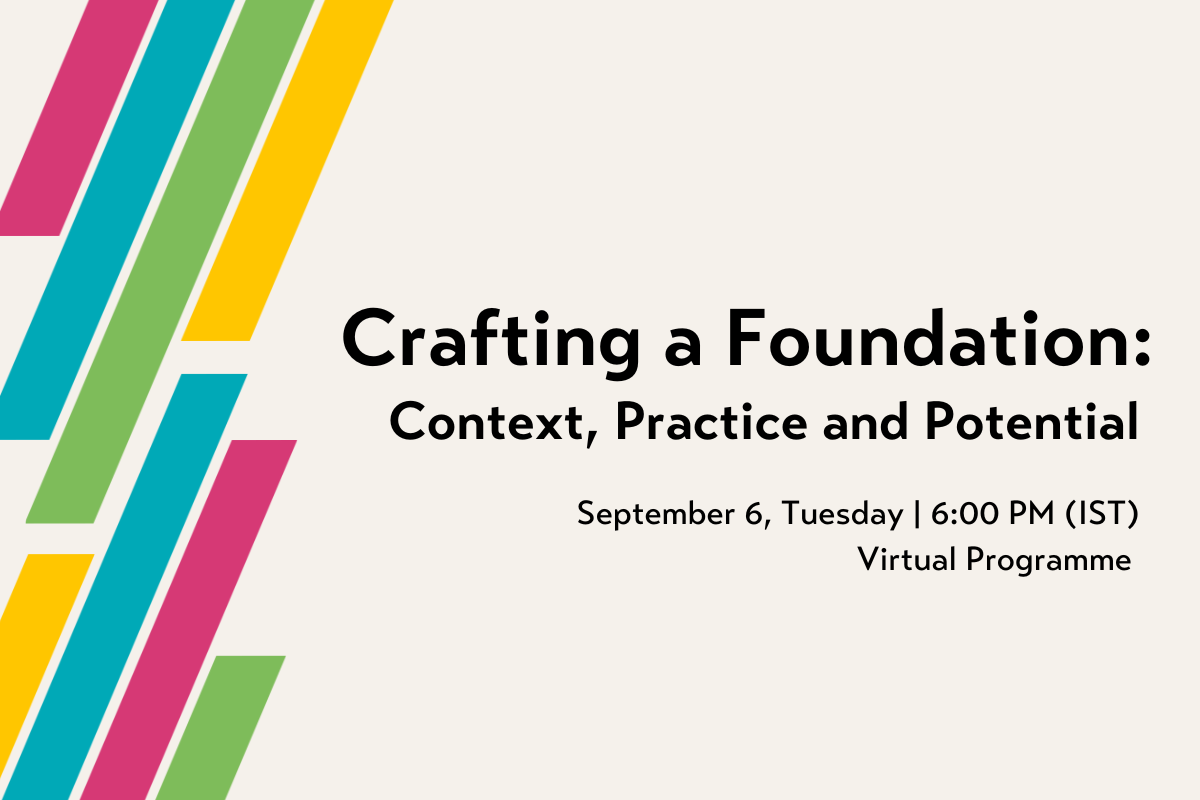 In response to the Covid-19 pandemic and the socio-economic effects of the lockdown on craft communities in India, the British Council, in partnership with Fashion Revolution India, launched a report highlighting key recommendations focused on reimaging the craft economy post the pandemic, gathering responses from stakeholders including artisans, designers, policy-makers and consumers. Published in 2021, the report used data from surveys and case studies to illustrate the adverse effects of the lockdown on the crafts sector, and steps that can and should be taken for the sector to become sustainable in the future.

This report was an important one: keeping side its specific mandate and directives, it brings to light a fundamental point – the importance of prioritising the crafts sector and the needs of its multiple communities in discussions on the creative economies of South Asia. But what does “craft” mean, especially within the wider landscape of contemporary visual art practice in the subcontinent?

Crafts activist, writer and designer Laila Tyabji has previously referred to craft as a  “goldmine of India”. If one was to extend this to South Asia more broadly, what art practices and which communities would this goldmine refer to? To those unfamiliar with the intricacies of the sector, craft is synonymous with a range of terms: folk, tribal, native, handmade, functional and - more recently – the vernacular. Is “craft”, therefore, too limited a word to define the multitudes it seems to convey? Or is it necessary to view these as unique forms of art practice with their individual histories and meanings? Who is a crafts-person? Are they the same as a vernacular artist? Within South Asia, given India and Pakistan’s shared cultural lineage, what points of intersection – or divergence – can we find between craft histories and contemporary practices of both regions? What role have other institutions and sectors, like design, fine art, or technology, played in shaping the artisan community in South Asia? And what challenges does the crafts sector face today - is there a need to "revive" it?

Join us as we kickstart our new series In Practice: New Vocabularies for Craft with a virtual panel discussion between art historian and designer Annapurna Garimella; visual artist, textile designer, researcher and educationist Noorjehan Bilgrami (also chief curator of the winning Pakistan Pavilion at the Dubai Expo 2020); and self-taught Kalighat painter Kalam Patua, moderated by Ritu Sethi, Founder of the Craft Revival Trust and member of Asia Society India Centre’s advisory council for arts and culture, as they reflect on these questions ands the myriad contexts of craft and vernacular art through their unique position in this sector. The discussion will offer modes of enquiry into understanding the very foundation of such a complex and dynamic sector, to unpack the vocabularies that are used to define craft; to locate craft within a broader context of art-making in the subcontinent; and to recognise its potential for the future of creative industries in the region. The aim of this panel is to set the stage and provide context for more focused discussions that will deep-dive into specific aspects of the crafts and vernacular arts sector in India and South Asia.

This programme is primarily in English but will include elements of Hindi.

In Practice: New Vocabularies for Craft is a series of virtual and in-person programmes, including webinars, roundtables, and immersive experiences that brings together art-makers, entrepreneurs, collectors, designers, and other stakeholders from the crafts and vernacular arts sector, in India and South Asia. The aim of the series is to act as a platform where we can collectively question and build awareness about the myriad contexts of craft and vernacular artistic traditions within a contemporary context.

Annapurna Garimella is an art historian and a designer. Her research focuses on late medieval Indic architecture and the history and practices of vernacular visual and built cultures in India after Independence. Garimella is the Managing Trustee of Art, Resources and Teaching Trust, a not-for-profit organization, which has a research library dedicated to art, architecture, design and craft histories, conducts independent research projects and does teaching and advisement for college and university students and the general public. She also heads Jackfruit Research and Design, an organization with a specialized portfolio of design, research and curation. Jackfruit’s recent curatorial projects include Vernacular, in the Contemporary (Devi Art Foundation, New Delhi 2010-11) and Mutable: Ceramic and Clay Art in India Since 1947 (Piramal Museum of Art, 2017) and Barefoot School of Craft in Goa (Serendipity Arts Festival, 2017-18). Her newest book is the co-edited Marg volume titled The Contemporary Hindu Temple: Fragments for a History (2019). Digesting the Past: The Discourse of Sacralized Architectural Renovation in Southern India (14th-17th Centuries) is her book manuscript under preparation.

Noorjehan Bilgrami is a multi-disciplinary artist, curator and educationist. She curated the inner journey for Pakistan Pavilion at Dubai Expo 2020. The interior design was given the Silver Award, as it stood 2nd in 192 countries.She was also the curator for the Art Project at the new International Airport, Islamabad.

Noorjehan is a Founder member of the Indus Valley School of Art and Architecture (IVS). She was its first Executive Director, and former Chairperson, Board of Governors.  She is grounded in the traditional crafts of Pakistan and her atelier KOEL spearheaded the revival of handloom weaving, hand-block printing and the use of natural dyes. Gallery KOEL has provided a vibrant platform for new and emerging artists. Her own art practice is meditative, exploring issues of inner reflection through a vocabulary that is intensely personal, while it touches upon universal themes. She has held numerous solo shows and participated in exhibitions in Pakistan, in the USA, Australia, Korea, Sri Lanka, South Africa and India.

She was the artist in residence at the Islamic Museum of Art, Design and Culture, Shangrila, Doris Duke Foundation, Honolulu, Hawaii, USA. At the culmination of the residency, her solo exhibition, ‘Under the Molsri Tree,’ was held at the Islamic Gallery, Honolulu Museum of Art. The work was acquired by the Museum. Noorjehan was awarded the Japan Foundation Fellowship to pursue research on natural indigo in Japan and curated the exhibition ‘Tana Bana: The Woven Soul of Pakistan,’ at the University of Wisconsin, Madison; the exhibition travelled to the Pacific Northwest College of Art, Portland, Oregon; to the Pacific Asia Museum, Pasadena, California and to Mingeikan, the Japan Folk Craft Museum, Tokyo.

Kalam Patua (born 1962) is a scroll painter and a painter of Kalighat pat which he revived in the late 1990s. Learning the art of scroll paintings from his uncle Baidyanath Patua in his early days at Murshidabad, Kandi, he experimented with it both in terms of form and content in the subsequent years. He has made many scroll paintings of the traditional themes such as the Nimai Pat and Hara Gauri Pat, and scrolls of non-traditional themes like Rabindra pat on the life of Rabindranath Tagore, Lalan Pat on the life of Lalan Fakir, French Revolution pat on the history of the French Revolution, and a scroll mural at the Delhi Crafts Museum shop on the history of Crafts Museum with the central theme of the matka or the clay pat. His scroll painting on the story of Orpheus and Eurydice is a work in progress. After having revived the Kalighat pat in the 1990s he has done solo exhibits in 2004 and 2012 at the Gallery Espace at New Delhi. He has also exhibited his paintings at the The Margi and the Desi: Between Tradition and Modernity group show curated by Alka Pande in 2004. He has taken part at international art workshops of Khoj in 2002, the Kalam to Computer at the Crafts Museum in Delhi in 2002 and Wrap the World at the Crafts Museum in 1999 jointly organized by the Crafts Museum and British Council. In 2011-12 he exhibited his paintings at the grand event of the 150 years of Kalighat paintings organized by the Victoria and Albert Museum of London and Victoria Memorial Hall of Calcutta which travelled in five Indian cities. In 2016 his paintings were included in the 8th trinialle exhibition at Queensland art gallery, Brisbane, Australia. Also his paintings were exhibited at the Sanskriti foundation and Museum jointly held with the 2016 Art fair in Delhi. Kalam Patua’s Kalighat style modern paintings are amongst the collections of the National Gallery of Modern Arts, Delhi, Victoria Albert Museum, London, the Museum of Sacred Arts, Belgium.