“Work” Out of the Box | Asia Society Skip to main content

“Work” Out of the Box 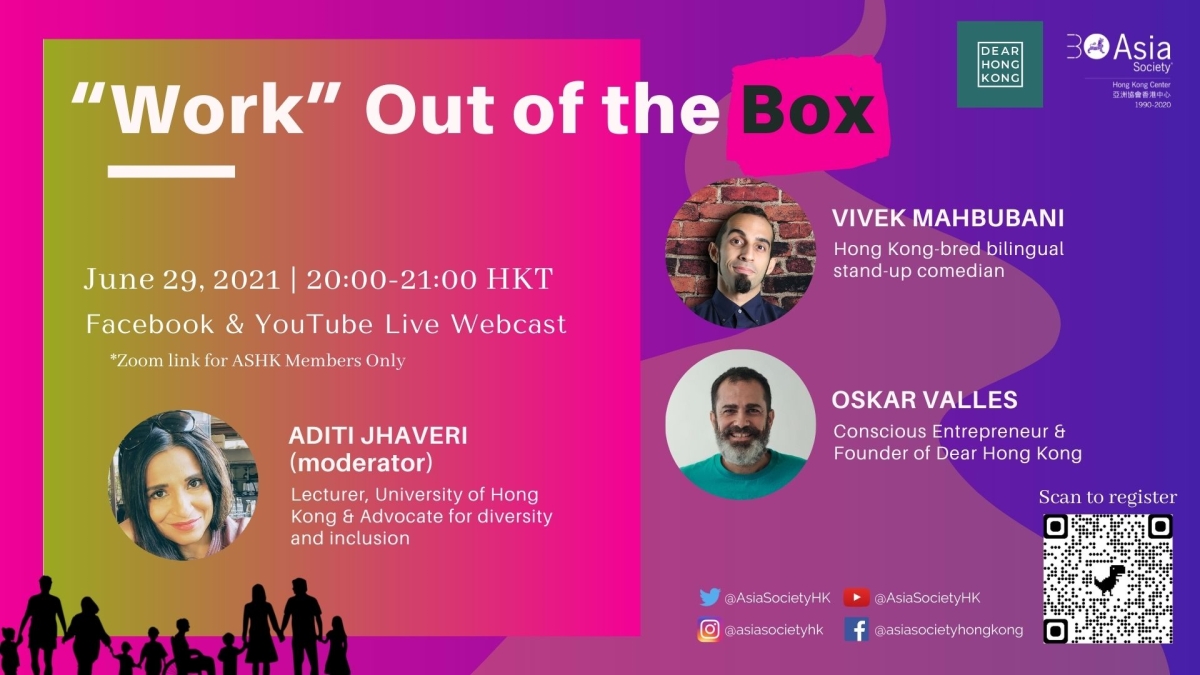 Come and join us for this interesting conversation!

Join on Zoom (members only)

“Two roads diverged in a wood, and I— / I took the one less traveled by, / And that has made all the difference.”

There are different career decisions that one has to make at different crossroads in their lives. Even when we know what we want and how the world works, you or the environment might change. Sometimes, you might be even thrown to a curve ball leaving you feeling unsure about how to move ahead.

Meet the two speakers whose names can get pronounced incorrectly here in Hong Kong, but both enjoying an “alternative” path that feel normal to them. One's a comedian trying to find the funny nuances in the world around him. The other's helping people realize the world is more diverse than even their wildest dreams.

Comedian Vivek Mahbubani and Conscious Entrepreneur Oskar Valles will come together to discuss how they got to where they are and why it's important to realize you can still be successful without having to shave daily. You'll hear about some crazy failures as well as scary moments where they doubted themselves but somehow things worked out.

So join them to hear about their adventures and watch them end the chit chat with less hair on their head but probably more enthusiasm in their souls. The discussion will be moderated by Aditi Jhaveri, Lecturer at The University of Hong Kong and advocate for diversity and inclusion.

Vivek Mahbubani is a Hong Kong-bred bilingual stand-up comedian performing in both Cantonese and English.

Having been crowned the Funniest Person (in Chinese) in Hong Kong in 2007 followed by his victory in the English category at the Hong Kong International Comedy Competition in 2008, Vivek has had the opportunity to take his sense of humor all over the world including Hong Kong, China, Macau, Singapore, Malaysia, Philippines, Thailand, Sri Lanka, India, Australia, Canada and USA.

Having been ranked as the top comedian in Hong Kong, in 2014, the World Famous Laugh Factory in USA ranked Vivek as one of the top 10 comedians in their Annual Funniest Person in the World Competition.

Oskar Valles, originally from Spain, came to Hong Kong nine years ago as a regional finance executive for a multinational corporation, where he had in-depth exposure to a variety of cultures across continents. In a personal search for meaning, he started volunteering for several migrant-related organisations, and he realised he wanted to help raise Hong Kong people’s awareness about the benefits of the city’s ethnic and cultural diversity.

He has been working full time on the Dear Hong Kong project for the last two years, with zero salary but incredible amounts of happiness, insights, and connections that have made the journey worthwhile. As a life coach, he believes in the power that conversations have to connect people and celebrate our uniqueness.

[Moderator] Dr. Aditi Jhaveri works as a Lecturer at The University of Hong Kong, and actively advocates for diversity and inclusion in her professional as well as pro-bono work. In the last few years, she has worked with the following bodies to promote workplace diversity:

•     Equal Opportunity Unit, HKU (as invited speaker on the implementation of inclusive language)

•     Committee for Gender Equality and Diversity, Faculty of Arts, HKU (as an elected, and later, nominated representative)

Got Questions? Ask them here in advance (beginning June 23) or during the program:

Online
Tue 29 Jun 2021
8 - 9 p.m.
Hong Kong Time
Calculate your local time »
Register Now
20210629T200000 20210629T210000 Asia/Hong_Kong Asia Society: “Work” Out of the Box Comedian Vivek Mahbubani and conscious entrepreneur Oskar Valles discuss a career in social enterprising, how they got out of the daily grind, and why it’s important to realize success comes in all shapes and sizes.