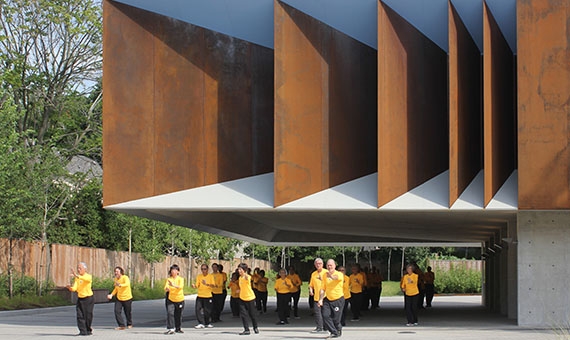 When Virginia Woolf was asked in 1928 to give a series of lectures at Girton College and Newnham College, two women’s colleges at Cambridge University, she titled her lecture; A Room of One’s Own. In homage to this immense literary figure, we are proud to present Brigitte Shim and Nasrine Seraji, two women who are both migrants and exiles, who will present their projects, an account of their beliefs and positions in architecture. This will be followed by a discussion on where we are heading in the 21st century as far as women in architecture are concerned.

Brigitte Shim is born in Kingston Jamaica and practices with her partner Howard Suttcliff in Canada, teaches at Toronto University. Nasrine Seraji is born in Tehran and is practicing in Paris, she has been teaching and directing many programmes in various Universities around the world. She is currently professor and head of the department of architecture at HKU. Both architects are officers of the order of Canada and order of Arts et Letters of France for their contributions to architecture and culture as well as education and the Arts.

This evening’s conversations will reflect both architects' belief in the power of architecture as a place for people to gather, as a place for the society to mirror its ambitions and as a place where time demonstrates its endurance as well as its temperance.

Nasrine Seraji studied at the Architectural Association and practiced in London before moving to Paris in 1989 to establish her studio where architecture is treated as both a cultural debate and a critical practice. Since then, she has pursued a path constantly enriched by her simultaneous engagement in architectural practice, teaching, and research. Between 1993 and 2001, Seraji taught at Columbia University in New York, at the Architectural Association in London, and Princeton University. Seraji was professor and chair of the Department of Architecture at Cornell University from 2001 to 2005. She was a centennial visiting professor at the University of Hong Kong in 2014 and 2015. She is currently professor and head of the Department of Architecture. In May 2016 she was promoted to the rank of Officier de l’Ordre Nationale du Mérite and subsequently in April 2017 she was promoted to the rank of Officier de L’ordre des Arts et des Lettres.

Brigitte Shim, along with her partner, A. Howard Sutcliffe, are both principals in the design firm Shim-Sutcliffe Architects. Shim-Sutcliffe’s built work explores the integration and interrelated scales of architecture, landscape and furniture and fittings. Brigitte Shim is also a professor at the John H. Daniels Faculty of Architecture, Landscape, and Design at the University of Toronto. She was the 2014 Eero Saarinen visiting professor at Yale University’s School of Architecture and has been a visiting chair and lecturer at numerous universities and participated in conferences globally. She has served on numerous international, national and local design juries as an advocate for design excellence including the 2007 Aga Khan Architecture Award Master Jury. In January 2013, Brigitte Shim and her partner A. Howard Sutcliffe were both awarded the Order of Canada, “for their contributions as architects designing sophisticated structures that represent the best of Canadian design to the world.”

Click for directions
Buy Tickets
Free admission. Online registration required.
20171031T190000 20171031T210000 Asia/Hong_Kong Asia Society: Women in Architecture Join Brigitte Shim and Nasrine Serajia in a discussion on where we are heading in the 21st century as far as women in architecture are concerned.