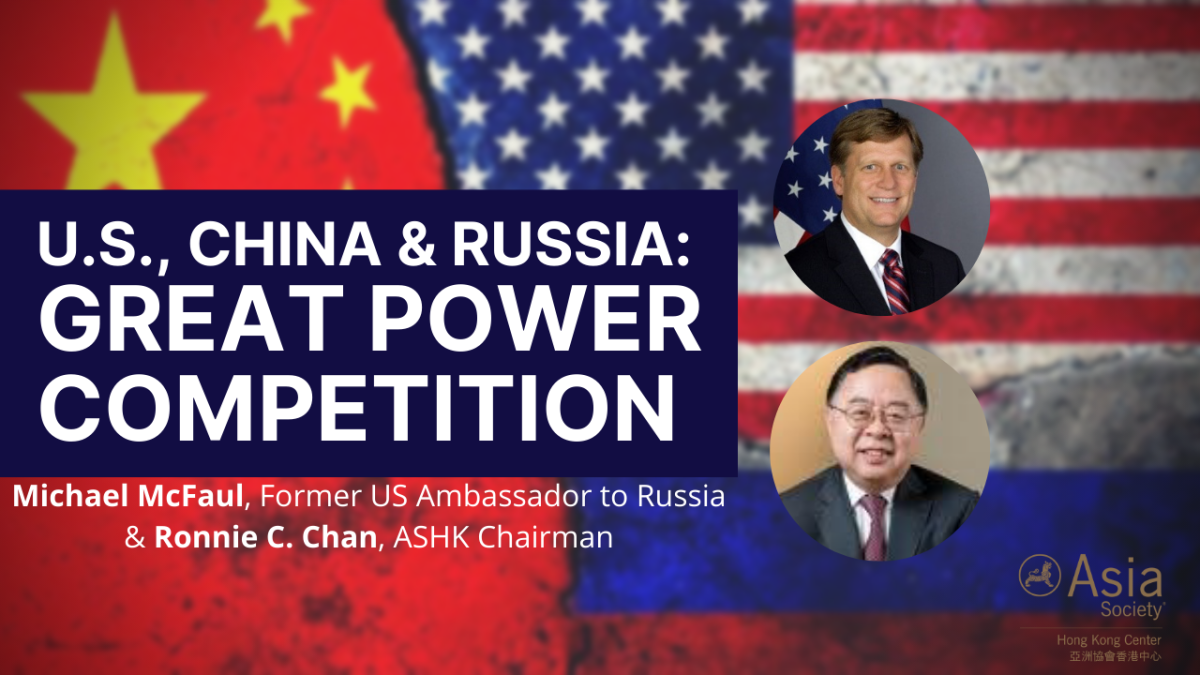 *(PRIVATE SESSION IS NOW FULL & CLOSED FOR ONLINE TICKETING. For PC & Corporate Members only who are still interested to attend, please email programhk@asiasociety.org to inquire further)

We kicked off the dawn of a new decade with a sobering analysis on the geopolitical crossroads the world currently finds itself in through the eyes of eminent historian Niall Ferguson. As 2020 is soon coming to a close, Prof. Niall Ferguson’s prescient description of an imminent return to a Cold War narrative shaping American foreign policy towards China and Russia has largely proven to be accurate. What are the similarities and differences in U.S.-Russia relations during the height of the Cold War versus presently? Are China and the United States entangled in a Cold War currently? What are the lessons to avoid from the past and learnings to emulate for the future? Senior Fellow at the Hoover Institution and former U.S. Ambassador to the Russian Federation, Michael McFaul, will disseminate further critical insights into U.S.-Russia and U.S.-China relations, in a dialogue with Ronnie C. Chan, Chairman of Asia Society Hong Kong Center, in what promises to be a lively and eye-opening discussion on the state of the world’s superpowers.

Michael McFaul is the Ken Olivier and Angela Nomellini Professor of International Studies in Political Science, Director and Senior Fellow at the Freeman Spogli Institute for International Studies, and the Peter and Helen Bing Senior Fellow at the Hoover Institution, all at Stanford University. He served for five years in the Obama administration, first as Special Assistant to the President, and Senior Director for Russian and Eurasian Affairs at the National Security Council, and then as U.S. Ambassador to the Russian Federation. Prof. McFaul has authored several books, most recently the New York Times bestseller, From Cold War to Hot Peace: An American Ambassador in Putin’s Russia. His research interests include American foreign policy, great power relations between China, Russia, and the United States, and the relationship between democracy and development. He received his B.A. in International Relations and Slavic Languages, and his M.A. in Soviet and East European Studies from Stanford University. As Rhodes Scholar, he completed his D.Phil. in International Relations at Oxford University.

Ronnie C. Chan is Chairman of Hang Lung Group Limited and its subsidiary Hang Lung Properties Limited, both publicly listed in Hong Kong. The Group expanded into mainland China in 1992, developing, owning and managing world-class commercial complexes in key tier one and tier two cities. He founded and chairs the China Heritage Fund, is a co-founding Director of The Forbidden City Cultural Heritage Conservation Foundation, Beijing, and is former Vice President and former Advisor of the China Development Research Foundation in Beijing. Mr. Chan is a Fellow of the American Academy of Arts and Sciences, Chairman Emeritus of Asia Society and Chairman of its Hong Kong Center, and Co-Founder and Chairman of the Centre for Asian Philanthropy and Society. He serves or has served on the governing or advisory bodies of several think tanks and universities, including Peterson Institute for International Economics, World Economic Forum, East-West Center, Pacific Council on International Policy, Eisenhower Fellowships, The Maureen and Mike Mansfield Foundation, University of Southern California, Indian School of Business, The Hong Kong University of Science and Technology, Yale University, Tsinghua University, and Fudan University. (Moderator)

*All President’s Circle and Corporate members, together with paid registrants, can enjoy both the free public program and off-the-record meet-and-greet.