Talent Acquisition in the Digital Era: Challenges and Solutions Seminar 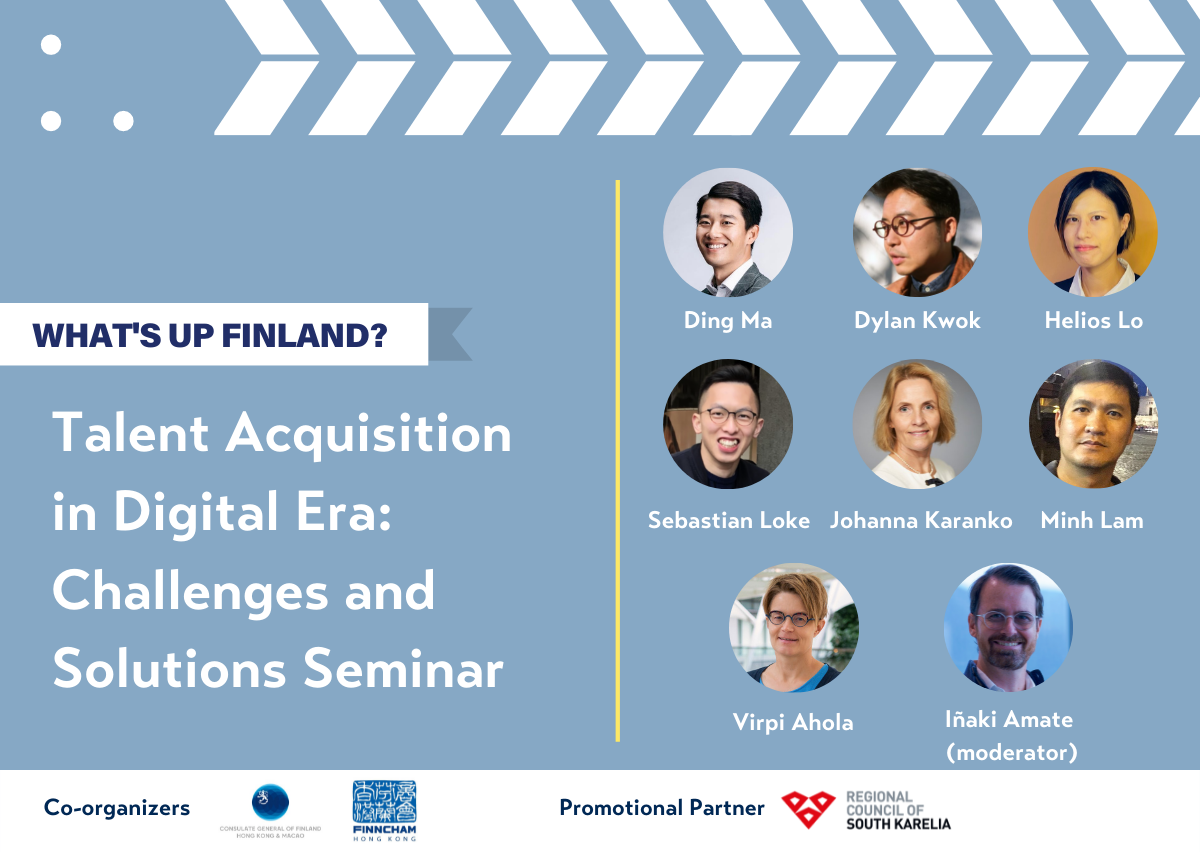 The pandemic has allowed many people to rethink their future and embrace remote and hybrid modes of work, such as self-employment and entrepreneurship. A meaningful career in a safe, healthy and sustainable living environment weighs more than before for job seekers and their families. The new work approach also poses challenges. For instance, despite digital advances, people still need face-to-face social interaction for exchange of ideas and innovation. As the pandemic makes international talent more mobile, there is also more vigorous global competition for high skilled workers.

Both Hong Kong and Finland are focusing on talent acquisition in order to build back better and greener. To attract talent, there is a need to remain globally attractive, increase the ease of immigration and travel as well as invest in innovation and technology.

The purpose of this event is to discuss talent acquisition in today’s digital world. International talent is mobile. Diversity and experiences from different parts of the world are both an asset to the individual as well as the company as they increase innovation and contribute to growth. Hence, besides highlighting as an example Finland’s policy to attract students, researchers, entrepreneurs and professionals, the seminar programme includes a panel discussion with talent that has moved between Hong Kong and Finland and vice-versa. In addition, the programme showcases the highly popular and innovative “90 Days a Finn” programme for attracting talent and its newest edition "90 days a Finn by lake Saimaa"  that is open for Hong Kong entrepreneurs, digital nomads, etc. next summer.

The event is part of the annual What’s Up Finland? –a week that highlights Finnish expertise and culture in Hong Kong. The overarching theme for this year’s events is “Designing a carbon-neutral future”. The event is also included in the Business of Design Week’s City Programme.

Virpi Ahola is a Computational Biologist and Biostatistician. In her early career she worked as a biostatistician in medical research and pharmaceutical industry. She obtained her PhD in Statistics and Bioinformatics from the University of Turku, Finland, and has experience in working with quantitative genomics and bioinformatics in animal breeding and plant pathogens. As a postdoctoral researcher she specialized in ecological and evolutionary genomics of wild non-model species with emphasis on high throughput genome sequencing at the University of Helsinki. Her work has resulted in more than 50 scientific publications from several research fields, including papers published in high impact journals. In her current position at the Ming Wai Lau Centre (MWLC) for Reparative Medicine, Dr Ahola leads Bioinformatic Platform. The platform closely collaborates with MWLC research groups of Stockholm and Hong Kong as well as local universities providing expertise and highly-specialised bioinformatics support in the areas of genomics/epigenomics, transcriptomics and systems biology. It also serves as a knowledge base that connects the bioinformatics know-how already present in the individual research groups in Stockholm and Hong Kong. The current research of the platform is specialised on studying gene function at a single-cell level using human or mouse tissues or stem cell lines as a model for human diseases.

Johanna Karanko has been the Consul-General of Finland to Hong Kong and Macao since September 1, 2018. Prior, she served as Director for Sustainable Development and Climate Policy at the Finnish Ministry for Foreign Affairs. Ms Karanko has been posted to the Permanent Representations of Finland to the UN in New York and in Geneva as well as to the Finnish Embassies in Paris and Caracas. At the Ministry Ms Karanko has led the World Bank Team and worked with EU Affairs. Ms Karanko is a career diplomat that joined the Foreign Ministry in 1996. She holds a M.Sc (Econ) degree from the Hanken School of Economics in Finland and a diploma from the prestigious Ecole Nationale d’Administration (ENA) in France.

Dylan Kwok is a designer, a communicator and a maker. Dylan spent his childhood in Hong Kong with close family ties in Japan. He moved to Canada with his family during college years. At that time, he became particularly intrigued by Nordic socialism and its minimalistic design, which subsequently led him to study and work in Finland.
Years of exposure across cultures have sparked his interest in designing for public space, and in creating systems of objects that can serve a wider audience. Dylan enjoys communicating with users to understand their perspectives in urban problems, and using his solid construction knowledge to make designs that serve their needs. He has applied design methods on various projects involving public space elements, such as park benches, trams, podium gardens, community kitchen, old train station in Japan, or even the Harbour Area in Helsinki, Finland. Nevertheless, the real satisfaction that drives his design comes from witnessing the public enjoying the work he produced.
Professionally, he has visualized interior concepts for Burdifilek Design Studio in Canada, and joined different architectural offices in Finland to conduct design studies for Nokia and the Helsinki City Planning Office. Since settling back in Hong Kong in 2011, he has managed various community projects and exhibitions for the Chinese University of Hong Kong (School of Architecture), the Hong Kong Polytechnic University (Design Institute for Social Innovation) and the Hong Kong Design Centre.
He has also taught at the Aalto University (Spatial design classes), the University of Saint Joseph (Architectural Design, three-dimensional thinking, Rhino3D), and the Macao Polytechnic Institute (Final Year Project), Furniture prototyping, Model making).

Minh Lam has worked in Business Finland in various positions. Minh Lam currently works as a Service Manager in Finland Promotions Services, one the sub units of Business Finland.  Together with the rest of the Talent Boost Team, he encourages Finnish companies to recruit international talents and shares information about the working opportunities in Finland and abroad.
His responsibility includes promoting funding and recruitment services to companies and relevant partners.
In the past ten years, he has worked on funding and in export promotion programs in Business Finland.  He has helped 130 Finnish companies to the Silicon Valley and to China. Between 2016-2018 he also lead a joint-program of Business Finland and the Ministry of Foreign Affairs of Finland with a budget of 50 million euros.  The goal was to generate sustainable impacts in Finnish companies and local communities in emerging countries.
Prior to joining Business Finland, he worked for Finnish software and telecom companies in the Middle East, France, China, Singapore and Thailand.

Helios Lo is a seasoned recruiter mainly focusing on recruiting IT and UX positions since 2016. She has been helping many major clients which include banks, insurance and solution providers to build key teams in Asia. She is effective at relocating candidates which is also a part of her expertise.
Helios holds a master degree in History from Oulu University and a bachelor degree in History from the Chinese University of Hong Kong.

Ding Ma works as the Liaison Manager of the Regional Council of South Karelia in Finland. He has worked previously as the market analyst for Finpro (now known as Business Finland), Country Promotion Officer for the Consulate General of Finland in Shanghai as well as Project Manager for Tencent during the M&A of the Finnish gaming company Supercell.
After joining the Regional Council of South Karelia, the region has been the first in Finland to launch the Asian Strategy focusing on enhancing export, invest in, tourism, education, and culture activities. The region was the first in the world to launch regional strategic cooperation with Tencent Wechat, as well as the first regional university to launch overseas campus cooperation with its Chinese partner in Finland.
Beside the work in the regional council, Ding also participates actively in community activities. For example, by acting as a city council member of Lappeenranta, chairmaning the local sport club SaiPa salibandy and championing the JCI Europe Public Speaking Competition.

Sebastian Loke is a co-founder of Chartipedia, a company that specialised in utilizing the latest data visualization techniques to provide data insights and content-marketing solutions to businesses. Prior to his role at Chartipedia, Sebastian worked as an investment analyst at two private banks in Hong Kong, Credit Suisse and HSBC Private Bank. Sebastian holds a BBA in Accounting and Finance from the University of Hong Kong.

Iñaki Amate was one of the pioneers of the Service Design Industry globally. He helped to build and lead Fjord in Europe, Middle East, South America and Asia over the last 14 years, and contributed to build the design ecosystems in countries like Spain, Turkey, Brazil, Hong Kong or Finland.
He also helped to build in house design and innovation teams for clients such as Telefonica, Nokia or Etisalat.
Iñaki is currently partner at EY and leads the Design practice across APAC.
Iñaki holds an MBA from the Helsinki School of Economics, a MSc in Economics and Digital Marketing from the Swedish School of Economics and a BA in Business Management (moderator).

Got Questions? Ask them here in advance (beginning November 25) or during the program:
https://app.sli.do/event/eddkfenx (code: # TalentAcquisition)