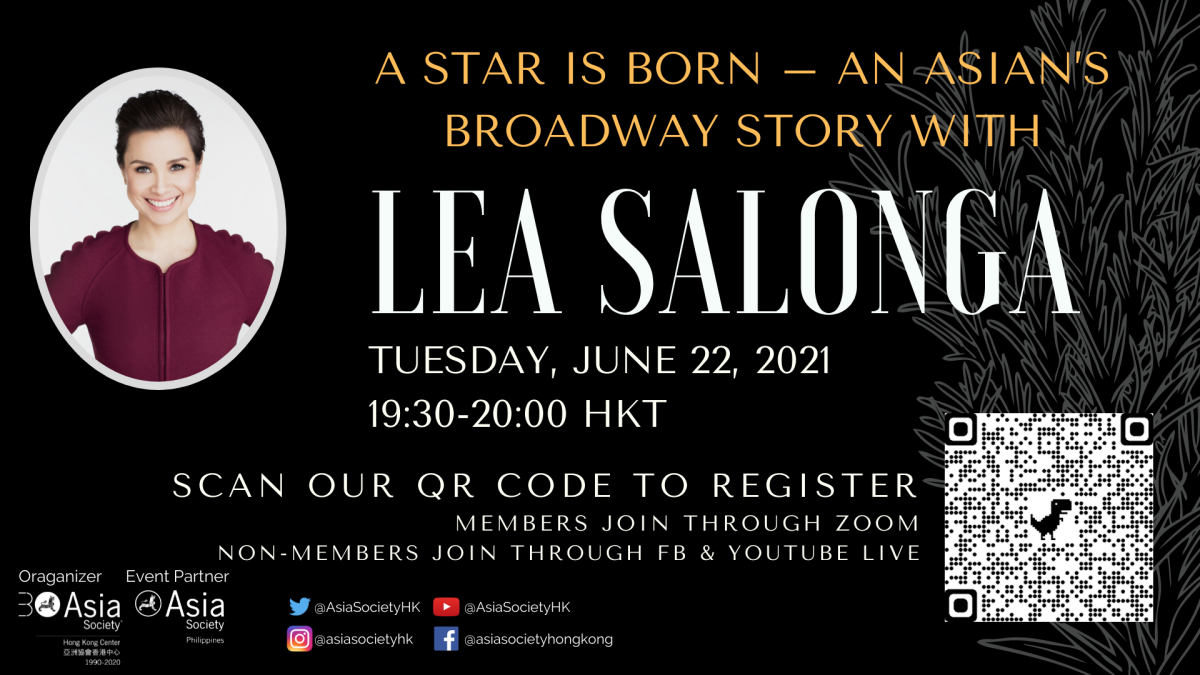 Join on Zoom (members only)

“A whole new world / A hundred thousand things to see / I’m like a shooting star, I’ve come so far/ I can’t go back to where I used to be”

Lea Salonga, the singing voice of Princess Jasmine from Aladdin, has created a whole new world not only for herself but also for other aspiring Asian performers and artists to grace the international stage of Broadway. Highly acclaimed, Salonga was awarded a Tony Award for her performance in Miss Saigon and marked the stage as the first Asian to play Eponine in the Broadway production of Les Miserables and Fantine in its 2006 revival.

In the fall of 2015, Lea also starred as Kei Kimura in the Broadway production of Allegiance. The musical, inspired and developed by George Takei, tells the story of a Japanese American family during the internment period of WWII. (See ASHK’s interview with George Takei: HERE)

Come hear Lea Salonga’s journey from Manila, the Philippines to Broadway in the United States.

Multiple award-winning actress and singer Lea Salonga is renown across the world for her powerful voice and perfect pitch. She is best known for her Tony Award winning role in Miss Saigon. In addition, she has won the Olivier, Drama Desk, Outer Critics Circle and Theatre World Awards, in the field of musical theatre. She was also the first Asian to play Eponine in the musical Les Misérables on Broadway and returned to the beloved show as Fantine in the 2006 revival. Many fans of all ages recognize Lea as the singing voice of Princess Jasmine from Aladdin and Fa Mulan for Mulan and Mulan II. For her portrayal of the beloved princesses, the Walt Disney Company bestowed her with the honor of “Disney Legend”.

Recently, Lea starred in the critically acclaimed Sony musical-drama YELLOW ROSE which hit theaters in October. Additionally, in August, Lea released her single “Dream Again” with all profits donated to charities aiding in COVID-19 relief around the world, including The Actor’s Fund. In November 2020

Lea Salonga: Live with the Sydney Symphony Orchestra from Sydney Opera House aired as part of Great Performances on PBS. A live album of the performance was subsequently released by Broadway Records. Currently, Lea serves as a judge on the Philippines hit version of “The Voice” including the ratings juggernaut “The Voice Kids”.

Got Questions? Ask them here in advance (beginning June 16) or during the program: